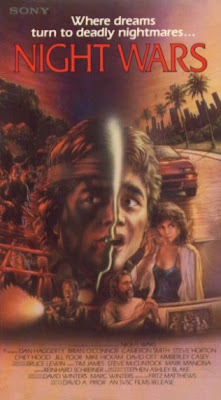 Jim Lowery (Smith) and Trent Matthews (O’Connor) are ‘Nam buddies who, nine years after the war, are both  haunted by the specter of their compatriot Jhonny O‘Connor (that’s how they spell his first name, it’s not a typo) (Hood). Jim and Trent must feel guilty for Jhonny’s becoming a POW. But when their dreams are so vivid, their injuries and cuts appear in their waking lives, they know there’s a serious problem. The torment of rogue mercenary McGregor (Horton) and his torture tactics have gotten to Jim and Trent so badly, Trent’s concerned wife Susanne (Foors) calls in psychologist Dr. Mike Campbell (Haggerty) for help. But the boys must “sleep together” in their fatigues to defeat the enemies in their dreams. When dreams and real life blur, who knows what the truth really is?

Night Wars is a good attempt at seriousness from AIP, but, once again, comes off as silly most of the time. That might be because of the constant, uncanny casting of goofy-looking sweaty people in almost every role. But there are some cool ideas and effects mixed in with the standard machine-gun firefights. This movie asks the question: what if the emotional trauma of returning Vietnam vets mutated into an actual, physical horror after the war? Try to imagine Jungle Assault (1989) crossed with A Nightmare On Elm Street (1984).
What if Freddy Krueger was a Vietnam vet?

The role of Jim Lowery should have been played by Wings Hauser, and he and Trent surely are the Bill and Ted of AIP movies, but mention (not necessarily honorable) must go to Dan Haggerty as the “cool” psychologist with the necklace and the pared-down beard. He’s really showing his range here. He’s not Grizzly Adams or the guy from Elves (1989). He’s a doctor. It’s really one of his best sweaters, er, performances.

There are the prerequisite torture sequences, but this time, they are really heaped on. There’s also the typical jungle/war cliches, but this time they are mixed with a dash of spookiness. Also it must be noted that this film has the most amount of people bellowing “NOOOOooooo!!!!!” that we’ve seen to date - it occurs four times during the movie.

While the ideas in Night Wars can’t exactly be described as original (many are lifted wholesale from Elm Street), the attempt to marry the Vietnam war film with the phantasmagoric dream film gives this AIP outing an interesting and noteworthy edge above some of the others. It really gives new meaning to the term “Dream Warriors”. Dokken take note.

For a war/horror hybrid film served up AIP style, look no further than Night Wars.

This doesn't sound too bad. War/horror hybrid is an interesting idea.

You're right. It wasn't that bad. It is one of the better AIP movies.

The whole thing sounds intriguing. Maybe I should watch it with Dokken playing in the background...

That is an awesome idea, DTVC! Dokken rocks. Would be interested in your take on the movie.

The scenes of these guys lying on their beds asleep shooting their M-16's is even more ludicrous than 'Deadly Prey' almost. Did nobody in the neighborhood hear a war going on inside a house? How did they not shoot each other lying on the bed? I remember doubling over in laughter the first time I saw this. What a classic.

Totally agree. That was laugh out loud funny. AIP at it's weirdest.

I was a featured American soldier in the flashback scenes

Very cool! Any interesting stories while making it?