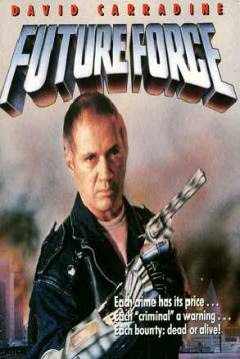 In the future, crime is so rampant that regular police are overworked. Enter C.O.P.S., a private firm that is like law enforcement/bounty hunters. It stands for Civilian Operated Police Systems. The big hotshot of the C.O.P.S. is one John Tucker (Carradine). With the help of his computer nerd buddy Billy (Douglas), he always gets his man. After it is thought that TV news reporter Marion Sims (Rapagna) has some incriminating dirt on corrupt Adams (Zipp), the head of the C.O.P.S., he frames her for, of all things, treason, and now all the bounty hunters are after her. Luckily (or perhaps not), Tucker gets to her first. Now Tucker and Sims are on the run from their former co-workers, who all shoot to kill. Adams and his sidekick Becker (Tessier) are ruthless, especially against someone who is “not on their payroll”, i.e. Tucker. But Tucker has a secret weapon, a “power glove” that must be seen to be believed....

Here, director David Prior steals from everything ranging from Death Race 2000 (1975) to The Outlaw Josey Wales (1976) to The Gauntlet (1977) to Robocop (1987), and it all has an especially junky feel. Even the cartoon COPS, which debuted on TV in 1988 (in that case it stood for Central Organization of Police Specialists), and the “original reality show” Cops, which debuted in 1989, might have been reference points for Prior, as they were contemporary shows in the general consciousness.

But the filmmakers must have had problems with the timeline, as even though Future Force was released in ‘89, the “far off future time” was a full two years later, 1991! Couldn’t they do just a bit better? Then again, they could have been aping yet another 80’s classic, Max Headroom, which takes place 23 minutes into the future. But this seems like it could have been a potential Ron Marchini vehicle, as it has the same cheap, “futuristic”, garbagey scenario, you know it’s the future because all the baddies wear baseball caps, and Carradine gives a flat, unlikable performance. Even “John Travis” (one of Marchini’s characters) and “John Tucker” are not far off, and Zipp’s portrayal of Adams is kind of D.W. Landingham-esque. Was this originally meant for Marchini, but Carradine was used instead? 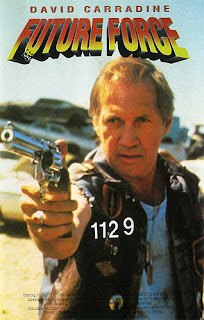 Carradine seems bored/tired/uninterested/perturbed in his role as Tucker, and even though he was 53 years old at the time of shooting, it is said he is 40. We’re not saying all action stars have to be young guys - look at Eastwood (an obvious influence on this film) - but come on. If the main star is not up for it, it can drag the movie down. While Carradine can do better, perhaps the influence of Marchini was just too strong. We know they know each other, at the very least, because they did a movie together, Karate Cop (1991). It’s almost funny how much Carradine openly seems like he doesn’t even want to be there. But on the bright side, he has an awesome vest.

As far as the baddies, William Zipp gives the best performance we’ve seen of his to date. He sinks his teeth into his villain role. His sidekick Becker (interestingly also the name of his sidekick in Jungle Assault, but played by Ted Prior), is a good heavy, and the actor that played him, Robert Tessier, has had a long career which contains everything from One Man Force (1989) to Beverly Hills Brats (1989) to No Safe Haven (1987). 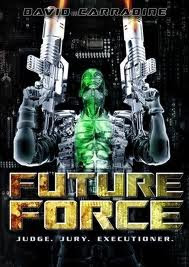 All of Tucker’s C.O.P.S. co-workers are goofy-looking dudes (except for genre stalwart Dawn Wildsmith) and they hang out at a strip club called the Demilitarized Zone, but in the movie, they misspell “demilitarized”! Come on. Little things like that go to illustrate the sloppiness of the overall production.

It may seem we’ve been a bit hard on Future Force, and Carradine’s perhaps-uncaring performance has something to do with that (even though he’s credited as a co-producer, so you’d think he’d care more, or at least put on that face), but if you take into account everything we’ve said so far, you could still have a grand old time watching this movie. It’s “cheap and cheerful” as they say, and there are plenty of fun and funny moments. Plus it has some memorable Steve McClintock music, as is common for AIP, and has a short running time of less than 80 minutes.

Seemingly one of the more popular AIP titles, you might be able to find this at closing video stores or thrift shops. If you do, pick it up...but don’t get on John Tucker’s bad side.

Wow what a co-incidence, the sequel Future Zone turned up in my mailbox today!

Woah, what a coincidence! I'm looking forward to your opinion of it too!

I just saw a clip of the flying glove on YouTube the other day and nearly crapped myself with joy. I need to see this movie. I live for bad and this looks amazingly bad.

And the face that there's a sequel is hilarious.

ALSO...I was just blogging about this yesterday but the director of this movie is currently filming a new sasqatch movie...STARRING REB BROWN! HE'S BACK!!!

I love the society broken down into chaos angle of the film. The only chaos being that caused by the C.O.P.S. fighting each-other for bounty.

Mr. Gable: Thanks for your comment! This is a hilariously bad movie. The flying glove bit was brilliant. That is awesome that Reb is back! Finally!

The Goodkind: The plot to the movie is really silly. Love the parts when they show the criminals they need to catch via the computer.

I've been meaning to get to this one for a while now, especially for the Carradine factor. It sounds like it might have so bad it's good potential.

It definitely has the so bad it's good factor. Carradine is hilariously wooden in this.