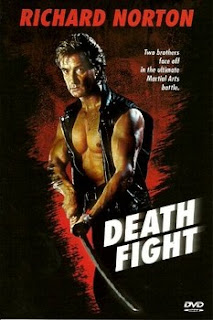 While in Bangkok on business, young Jack Dameron’s (Norton) parents are brutally gunned down. He is then raised by Papa Fung (Avellana) along with Fung’s son, now Dameron’s “step brother”, Chiang (Guerrero). All the while, Dameron immersed himself in the ways of martial arts.

Now, in the present day, Dameron is poised to take control of the lucrative family business, Bangkok Mercantile. He has a successful wife (Moncrieff) who is a lawyer, and things are looking up. But Chiang is an evil, corrupt man who, rather than climb the corporate ladder like his step brother, felt more at home staging illegal underground Deathfights. While the audience for these matches enthusiastically holds their cash in their hands, punchfighting isn’t enough for Chiang. He wants the corporate control as well. So he frames Jack for murder. Jack spends some time in prison, befriending Wiley (Strzalkowski). Once out of jail, Jack is on a search for the truth - but it’s going to involve putting his lifetime of martial arts training to use.

Here we have another Maharaj/Norton vehicle, and judging from the VHS box art, they were trying to make Richard Norton a more noticeable name for video store patrons perusing the shelves. While he certainly deserves it, he somehow never reached the level of the Seagals and Van Dammes in America.

For Norton’s character, Dameron, shirtlessness is a way of life. His shirt, gratuitously or not, is either off or coming off, and there’s even some pre-Transporter (2002) shirtfighting. Rather than Guerrero’s character Chiang being the real nemesis to Dameron, it is in fact Chuck Jeffreys as I-Ron. Sure, his voice sounds dubbed and his hairstyle is ridiculous,  but the fight between Norton and Jeffreys is by far the high point of the film.

Deathfight needed a bit more energy, and actually it could have used some more punchfighting. Interestingly enough, Chiang calls it “Shoot Boxing”. This as opposed to Shootfighting. I know, it all gets very confusing. That’s why everyone should call it punchfighting. That would make all our lives easier. But there are other action bits as well, such as the classic barfights and fruit-cart style car chases. There’s a shootout at the end with a unique shot of a baddie falling out a building, seen from a unique point of view. That was noteworthy.

The movie is filled with “just bubbling under the radar” names such as Cris Aguilar from Savage Justice (1988), Raw Target (1995), some Bloodfist movies and Blood Ring (1991), Strzalkowski, also from Savage Justice and Raw Target, appeared in the other Norton vehicle Raiders Of The Sun (1992), and Ron Vreeken as Manson, who appears some kind of cut-rate Matthias Hues, was in Norton’s Under the Gun (1995), as well as Hurricane Smith (1992). Avellana and Guerrero are well known to B-movie fans, having been in countless productions, Filipino and otherwise.

Deathfight is so-so in most departments, but the presence of Richard Norton raises the watchability level considerably, and the fights, especially the Norton/Jeffreys brawl, raise it further.

Who can say no to a movie called Deathfight? Not me. I'll have to get this. Hopefully we'll get more movies with titles like Kicksmack, Fistface, Elbowdeath and Pain in the Groin.

Yeah I could work something with that. The best title I ever read was from Vern; an action movie about a cop with a moustache out for justice. It was called: JUSTACHE.

Haha, JUSTACHE that is brilliant!

I like the idea of Norton raising the watchability. Definitely one to keep on my radar for future Norton flicks.

He definitely makes the movie better! Would be interested in your take on it!