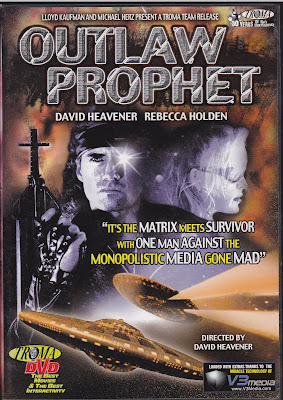 John 141 (Heavener) is some kind of intergalactic future TV star. His producers have him running from planet to planet in the galaxy to do increasingly harder challenges. When he is sent to earth, he becomes attached to a young mute girl, Amy (Sharone) and an alien hunter. After some experiences on earth (in the small town of Paris, Tennessee), he discovers God and the Christian religion. With the help of the angelic Molly (Holden), John 141 must fight for his survival and that of his new compatriots, as well as his new religion.

We’re big David Heavener fans. We think he’s talented and underrated, and we appreciate how all of his movies are labors of love where he stars, writes, directs, does the music and probably does the catering and is the Best Boy and Key Grip. We’re always looking out for his movies. If someone not accustomed to low-budget films found Outlaw Prophet and popped it in their DVD player, they would probably groan and say, in one way or another, how they can’t tolerate such “badness”. True, the early CD-ROM-style computer graphics are quite bargain basement and thus funny - and even mesmerizing - but in this case you have to look beneath the surface. 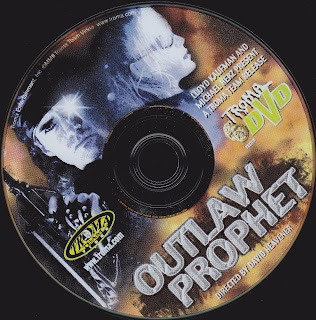 Basically going it alone, David Heavener fashioned this tale of religious awakening in his own inimitable way. While, to be honest, it does become a bit too much of a wacky sci-fi slog for its own good, try to imagine some sort of cross between Abraxas (1990) (with which this movie shares an interesting amount of similarities), Death Drug (1978) and the dreaded Shredder Orpheus (1990). While this movie “shreds” Shredder Orpheus, the cheap, day-glo-soaked set design and lack of coherence reminded us of that film.

And while the vibe of the movie might remind you of something the people behind Hell House (2001) might make, you’ve got to admire Heavener for trying to inject deep theological questions amidst cheesy laser effects, some sort of talking brain called “McBride”, and stock footage from other Heavener movies (including a tantalizing few seconds of some Robert Z’Dar movie), all while wearing tights. TIGHTS! I guess that means he’s from the future. Or space. Or something... 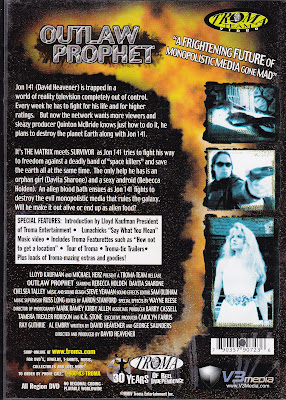 While not the first movie you should see if you’re turning on to David Heavener, Outlaw Prophet remains a unique - if flawed - production. Watch for the music video in the church. It’s a movie highlight.

I'm definitely keeping this on my radar. I'll take your advice though and hit some other Heavener first.

Cool. There are some better Heavener flicks out there, but Outlaw Prophet is one of his more ridiculous outings.

... when prophets are outlawed, only outlaws will be prophets.

Haha, that would make a good bumper sticker.

This is a bonkers premise. That alone should warrant a watch.

It is an odd film! Heavener acts very weird in it.