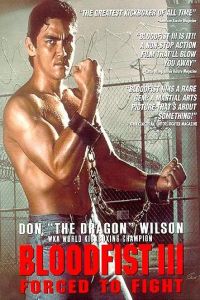 
Jimmy Boland (Wilson) is in prison after a barfight gone wrong. Now in prison, he fights a guy named Luther because he raped his friend and Luther dies because of it. Now the Black gangs on the inside want to kill Jimmy. The White racists welcome him into their camp, but Jimmy refuses. Now he’s got two prison gangs out for his blood, and, being the loner that he is, Jimmy Boland is...forced to fight! Jimmy is put in a cell with the intellectual and respected (by most) Stark (Roundtree) and they become buddies. Also, the pedophile Diddler (Cardone) is portrayed as sympathetic and he and Jimmy also forge an uneasy friendship. Seeing as Wingate State Penitentiary is considered to be a state-of-the-art facility, the higher-ups are hushing up a lot of the corruption and misdoings. As alliances on both the inside and outside are constantly shifting, will Jimmy be able to expose the truth and fight his way to freedom?

Bloodfist 3: Forced to Fight was the first in the Bloodfist series not to be connected to the first two. It really should have been called simply Forced to Fight, but the ever-crafty Roger Corman must have thought they should unnecessarily slap the Bloodfist moniker on it just to be safe. Seeing as how this movie actually went to the theater but tanked, it was the final theatrically-released Bloodfist film. The fact that three made it to the theater is still impressive.

Truly this is Don the Dragon’s Death Warrant, and he carries it off in his own inimitable way. The filmmakers seemingly really tried to make him look like Lou Diamond Phillips this time around. Much like how Frank Zagarino was meant to resemble Dolph Lundgren in Armstrong. But it’s really not needed, The Dragon stands on his own. For this movie, they actually got another name, Richard Roundtree. His role is substantial and he acquits himself well in what is really an ensemble film.

Then again, he was competing directly against French Fry (Callahan) and Weird Willy (Schott) so all bets are off. But he took the role seriously, which is good. Peter “Sugarfoot” Cunningham of Above the Law (1986) fame is here as an inmate named Champ. Though he’s not credited in the film, we strongly believe Ian Jacklin is on board as well, as one of the Aryans, or, as they call themselves, “Scooter Trash”. I know, I don’t get it either.

The movie is entertaining, and, for its kind, surprisingly well-written. There was an attempt to be serious here and deal with real issues. We felt that was done well and an interesting change of pace. The pace was to be changed once again with the fourth Bloodfist film, whose tone is much lighter.

The tradition of the actor/fighter’s championship titles appearing along with their credit is maintained, Eric Lee helped with the fight coordination, and the Michael Elliott score is worth pointing out as well. Also, for movie night, the prisoners all watch TNT Jackson (1974). That probably wouldn’t occur today. In actuality, a lot of the prison scenarios here aren’t completely realistic. But hey, Wingate is a new kind of prison.

This Don the Dragon prison film under the Bloodfist banner is worth seeing.

I'm always the last to hit your posts during the week, but the first on your Saturday post. I enjoyed this one too, and I think it was good that Wilson got his perfunctory prison flick out of his career early, so he could go onto to do more "one man against the world" movies. Great stuff.

Happy you enjoyed it too! Totally agree with you about Don getting this out of the way. The 4th Bloodfist will be posted on Monday.

It's hard not to like Roger Corman. He always seems to know what I want to see ...

I have to brag for minute - I bought some old documents at an auction for $10 once - stuck in the middle was Pamela Duncan's contract from Attack of the Crab monsters with notes penciled in by Roger himself!

Just checked the 'upcoming' section - I sincerely hope that Gymkata is everything I think it will be - looking forward to the write-up.

That is so cool you have the contract to Attack Of The Crab Monsters!

Also: Gymkata is hilariously horrible. We would interested in your take on it.

We have such a backlog of reviews to post!

Bought the Bloodsport 1-4 boxset a while back. Sorry to say I didn't enjoy them as much as I thought I would. 3 was definitely the best of the lot though. I love Corman's other sci-fi/fantasy stuff. Just can't get into Don Wilson's acting style - it's neither good nor bad, just average. And so's his fighting... controversial I know.

Hmm, i can understand not liking "The Dragon". He is wooden, but likable. His fighting is decent, but it should be used better.

I hadn't seen these "bloodfist" films in so long. But I do remember thinking part 2 was badass. Or am I imagining that? lol. Great write up!

Thanks! You're right, Part 2 was pretty fun!

I reviewed this not too long ago and I was suprised how good it was. I liked the interaction between The Dragon and Richard Roundtree and it was nice to see that they made some attempt to make the villains three-dimensional (I love the white supremacist's monologue about how his mom used to make him grilled cheese sandwiches). It's basically The Shawshank Redemption of Kickboxing in Prison movies.

Totally agree with you! "Get busy punchin' or get busy kickin'"...