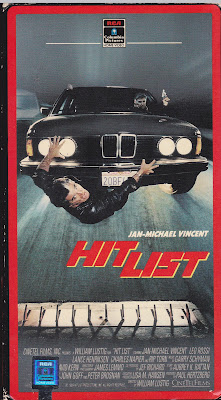 Vic Luca (Torn) is a John Gotti-like mob boss who is going to be convicted in court - if his mob underlings can testify. But Luca sends a shoe salesman/psychopathic hit man, Caleek (Henriksen) to kill them so they can’t spill the beans. Purely by chance, Caleek invades the home of innocent man Jack Collins (Vincent), intent on killing him, believing him to be potential informant Frank DeSalvo (Rossi). DeSalvo is being protected before the trial by Tom Mitchum (Napier), an FBI agent on the edge, in a house across the street. When Caleek kidnaps Collins’ son and puts his wife in the hospital - and Luca’s goons cross DeSalvo as well - the two guys create an unlikely partnership to get revenge.

Why is this movie so under-appreciated and unrecognized? If you said to someone “Oh, I watched Hit List last night”, more than likely, they would say, “Huh?” That’s unfortunate, as a movie with the star quality this movie has, directed by William Lustig SHOULD be a well-known “video store classic” as we say. Maybe now that can start to be corrected. 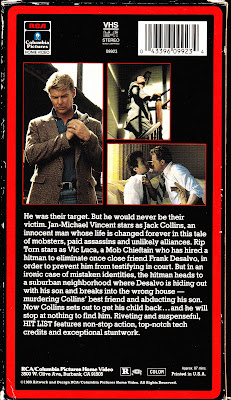 Here we get to see Lance Henriksen as you really want to see him - in a very meaty role as an incredibly brutal bad guy. It’s truly “Lance Unleashed” as he has an evil beret and an evil crossbow/grappling hook/zipline, as well as some nasty martial arts moves.  Leo Rossi is also memorable as DeSalvo, a man who still believes in the codes of honor of the mafia - at least for a while. Vincent mainly just says “Gimme back my son” many times, which, of course, predates Ransom (1996). Rip Torn, who doesn’t often appear in movies like this, puts in an off-kilter, energetic role. Even Charles Napier gets to flex some muscle.

But, by far, the two best things about Hit List are 1. This movie is really politically incorrect - it was made in a time before PC stuff existed and it’s really beautiful to watch. Thank God things like this were preserved for posterity. and 2. the scene in the Photon arcade. (For those that don’t know, Photon was a competitor to Laser Tag, and in some places was replaced by Q-Zar, where kids run around with laser guns and shoot each other). Another awesome preservation.

In all, Hit List is an enjoyable film with a nice pace with a lot of familiar faces. What’s not to like?

Lance Henriksen and Rip fuckin' Torn??? Why did the world not explode at the b-movie awesomeness?

Not sure! There must have been some earth shaking in 1989!

Dude, I've always wanted to see this, mainly for the fact that Lustig did it. But all of your other points pretty much solidify this as a "must see" and soon!
Good one man, thanks!

I thought this was pretty decent, though I wasn't as blown away by it as you guys were, still I won't deny that the performances were top notch!

Damn, this looks sweet. I loved Lustig's work on the Maniac Cop trilogy - will have to try and track this down.

RobotGEEK: Lustig has made some amazing movies in his career. Definitely interested in your opinion.

Venom: Lance Henriksen was at his best in this one! Jan-Michael Vincent seemed a little off, but he still did a decent job.

Can't agree more. It is definitely a dream team!

Somehow this one slipped under my radar...

Still got this one on (big box) VHS. You can't go wrong with Henriksen dancing, kung fu-ing and hitting children....matched against a semi-stoned Jan Michael Vincent (clearly not aware the camera is rolling)

Alex: It is definitely a hidden gem! Looking forward to your opinion when you get a chance to watch it.

Lee: We loved Lance in this. He always plays a killer baddie! Haha, Jan-Michael Vincent did look kind of high\or drunk in it.

Man, thanks for bringing this flick to my attention. I've got to see this one... like yesterday! It looks epic. That's why I love this site, you guys continously find hidden gems like this. The combo of Lustig, JMV, and Henriksen is pretty irresistible. And that video box art is just that... art.

Huh. I love Rip Torn! Gotta look this up!

Videovacuum: Your words are too kind! We love comments like that and we live to bring hidden gems like Hit List to the surface. We are glad you appreciate it!

Hoaks2: When Rip Torn meets Lance and JMV, you know it's worth looking into.

Awesome stuff Ty, I've been searching for this but can't find it,any ideas where I could find it? Really need to see this!

Thanks! We found a used copy for cheap on Amazon. There are bunch of used copies on their site via sellers. Would be interested in your take on it!

I second videovacuum - Comeuppance (and DTVC too) consistently deliver hidden gems. My watch list, which was already overflowing, has become nearly unmanageable after hooking up with you guys. Keep the hits coming ...

Thanks for the kind words!

I had this as a german vhs a few years back...and now..i have to buy it again, damnit...no DVd, that sucks, cuz its an awesome film, and so much crap is sold on DVD, its a shame.Ill get me a vhs and put it on dvd...thats the plan...

It is definitely worth owning again! Do you know if the German VHS is different in any way from the U.S. version? Maybe box art?

I have the American VHS, not the big box, but the regular cardboard box, and when the end credits are about to start the tape just ends. Bang! No more room on the tape, no end credits. Were RCA really so cheap that they couldn't pay for some more tape? Or is it just my copy?

That is really weird. We have the same tape and the credits are intact...could be a faulty copy...great movie though.

Wish it was on dvd....jmvincent definitly no all there on set. Was an amazing cast to work with..legends!!!

Thanks for your comment. If you have anymore to say about Hit List, write back anytime! Great movie.