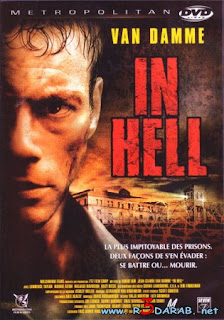 Kyle LeBlanc (Van Damme) is an American who works in Russia. When his wife is murdered, he gets revenge and kills the assailant. Unfortunately, rather than be the end of the movie, it’s just the beginning of the nightmare for Kyle. He’s sent to a harsh, unforgiving Russian prison (is there any other kind?). While in there trying to survive, it comes to light that the corrupt guards bet on Punchfighting matches which they call “The Sparka” between the inmates. Kyle trains and fights, and becomes good, but in the process begins to lose his soul. Thanks to cellmate 451 (Taylor), Kyle starts the process of escaping his prisons, both mental and physical.

It may have been stated before, but In Hell is truly a return to form for Van Damme. After the horrendous Derailed (2002), he probably re-assessed his life and career and demanded he do something of quality. This may be an educated speculation, but In Hell is the result. It’s shot and directed well, as Ringo Lam is a talented man, and Van Damme probably thought it was foolproof to fall back on his Maximum Risk (1996) and Replicant (2001) director to deliver a good, solid production. He was right. 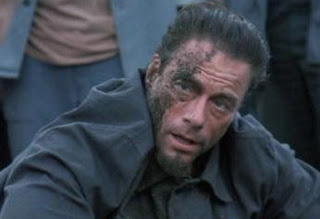 Interestingly, In Hell balances bare-knuckle, hard-core Punchfighting with a surprising amount of depth and philosophy, primarily delivered by Lawrence Taylor (of all people) as 451. The movie shows how Kyle becomes feral and animalistic, and begins to lose his identity. But he must search his soul to get it back. On top of that, there’s even some parallels to the biblical Samson story. Van Damme has a beard and long hair at one point. Can he maintain his abilities once it becomes a soul patch? 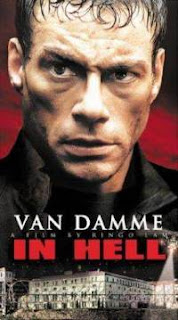 While there is some CGI (we’ll forgive the CGI moth, but the CGI planes are unnecessary), if you think about such movies as The Quest (1996), and compare that to this, you truly see Van Damme’s range as a performer and martial artist. The Quest, for all intents and purposes, is a kid’s movie, and In Hell certainly isn’t. Those are two ends of his spectrum, and any JCVD haters out there should keep that in mind.

He clearly saw In Hell as a chance to stretch and push himself as an actor/martial artist (in itself a good sign that at his age he still wants to grow and learn), and In Hell was the perfect vehicle to do that, and the results are winning and entertaining, while delivering a different kind of Van Damme. So it could be said that it was a success all around.

Thirteen years after Death Warrant (1990), Van Damme returns to prison. And we should all be glad he did. In Hell is a Van Damme winner.

I didn't see it as a return to form at all, I thought it was a HUGE step down, Van Damme's "dramatic" scenes were rendered emotionally inert as a result of his somewhat unconvincing acting, the fight scenes weren't very compelling, and aside from Van Damme, the other actors in the film were extremely ameturish and they're characters were the same types you always see in prison films(is just it me, or is a prison one of the most boring movie locations there is?). Also the beginning of this film was stunningly similar to another DTV film "Evasive Action", with the wife killer getting off on a technicality and the main character killing them in the courthouse dramatically, both scenes were so similar that I have a hard believing it was a coincidence. In Hell did have a few effective moments(like the brawl betwen the guards and inmates) but overall it fell rather short of it's mark, i'd honestly prefer watching Derailed, Nowhere To Run and Assassination Games over this, whereas The Quest felt like a third-rate retread of Lionheart, this film feels like a third-rate retread of the more effective Death Warrant.

This one was a breath of fresh air after the desaster that was Derailed... a pretty good prison movie...i liked the different looks hes had in the movie, especially the alex(double impact) plus goatee look inbetween.

Venom: Some Hollywood Van Damme is too watered down like The Quest and some of his DTV work is just stupid like Derailed. We felt In Hell hit a sweet spot between the two. It had a grittiness and some actual ideas that separate it from a typical prison movie. One of these days, we will check out Evasive Action and see the similarities.

Hellford667: We agree with your stance. It was nice to see Van Damme going in the opposite direction after Derailed.

No Hard Target review? That was my favourite JCVD flick!

Our Hard Target review is dropping on Friday the 21st. Definitely one of his best movies!

Totally agree. In Hell is a top DTV Van Damme. Second In Command was a solid Van Damme effort. It is not going to be part of "Van Damme Month" but we may review in the future.

I actually liked Locked Up, Stallone actually showed some impressive range, but IMO dramatic scenes are just not Van Damme's strong point, most of the time he looks incredibly stiff when he tries to remote and it's not a pretty sight(he did fine in JCVD when playing himself though)and In Hell just felt like a carbon copy of most other prison films(the best prison film for me was The Prisoner with Jackie Chan, and Half Past Dead was pretty underrated as well)it reminded me an awful lot of the Linda Blair film Red Heat, only without the gratituos nudity.

Oh yeah, and BTW, Evasive Action is yet another Die-Hard-On-A-train film which stars none other then Roy Schneider as the villain, it also has Dick Van Patten, Way Wise, Ed O Ross, Don Swayze and Clint Howard

Evasive Action has a killer cast and we will have to check that out soon!

The only thing I remember taking away from this was the fact that Lawrence Taylor was in it. lol. I thought it was odd, but then was shocked that the guy could actually act! Who knew?!

Thanks! We were surprised by Lawrence Taylor's acting too! Haha.

Totally picking this up. I had heard about this when it came out, but never got a chance to watch it. Totally spaced it until now.

Awesome about Hard Target. Try and review the uncut version if you can!

We reviewed the uncut version and it is coming this Saturday October 22nd.