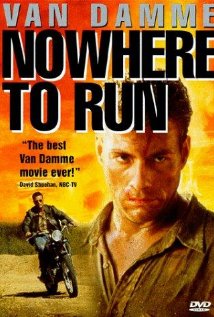 
Clydie (Arquette) is an attractive widow trying to raise her two kids, Mookie (Culkin) and Bree (Tiffany Taubman) on their family farm. Sam (Van Damme) is a mysterious prison escapee living on their land in a tent. Over time, Sam endears himself to the family, especially because the young Mookie is desperately searching for a father figure after the death of his own dad. Sam couldn’t have come along at a better time, because classic evil land baron Franklin Hale (Ackland) wants to take Clydie’s land and build a multi-million dollar development. So naturally he sends out his goons of various stripes to muscle the farm away. But not on Sam’s watch. Will Sam join Clydie’s fam? Or will yet another megalomaniacal land developer develop a way to keep them apart?

Ah yes, let’s take a trip down memory lane...it wasn’t so long ago that every Van Damme (and even Seagal movie, as hard as that is to believe now) went to the movie theater. JCVD had yet to become synonymous with DTV, and this film is quite mainstream. It has a highly polished, theater-ready look and feel. But because, after all, it’s still a Van Damme action movie, it’s still dumb and Van Damme has a ton of silly one liners that really don’t even make any sense. 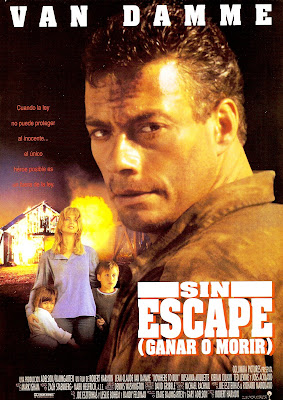 Really, he just seems confused. In just about every scene, whether he be peeping into Rosanna Arquette’s window as she takes a bath, cooks a steak in the rural wilderness while wearing a suit, or just chillin’ in his pup tent with the latest issue of Top Heavy magazine, Van Damme seems oddly off-kilter in his performance. But that doesn’t stop him from showing his (presumably male) audience his time-honored unnecessary and un-asked for nudity. Rather than yet another eyeball-rolling shot of his naked butt, what this movie really needed was more goons for him to fight, more action scenes, and just more fight scenes in general. This is Van Damme here, after all.

Nowhere To Run also needed more verve and a streamlined plot. And what goons there are happen to be not evil enough. They should have done something REALLY evil and then Sam could go after them on a no-holds-barred revenge mission. That would have been awesome. Unfortunately however, this is run-of-the-mill Van Damme with few surprises. (Although what surprises remain are pretty good).  The plot of the mysterious stranger that comes to a ranch to protect a family from the no-good-niks in town is ground well-covered since the days of the earliest Westerns, and Van Damme playing Monopoly with 2 kids and a song by Damn Yankees tacked on the soundtrack doesn’t really add much new to the old formula. 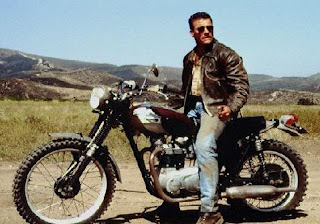 One more thing: Without any spoiler, let us just say this: the ending is UNBELIEVABLY lame. It’s one of the lamest - if not THE lamest ending to an action movie we’ve ever seen. The movie itself isn’t nearly good enough to justify or counterbalance such a disappointing ending. It’s not like “whoa, that movie was awesome, so, okay, we forgive how much the ending sucks.” No. The ending just sucks, period. It drags the whole movie - everything we’ve just seen and invested in - down.

Nowhere To Run is standard (actually, probably below-standard) Van Damme fare and despite a few bright spots, it’s really nothing to get too excited about.

I've always got time for Van Damme. Although his films are largely all terrible, you always know what to expect from them so they can't let you down. Nice review!

Thanks! We can't agree more. Van Damme usually delivers the goods, but he needs to be interested in the project. In Derailed, he looked very bored and unhappy.

I can't seem to remember how this one ended for the life of me. I only saw it once at the theaters, but feel that I could only describe this one as "low key" with not a lot going on. I remember the motorcycle chase, and I remember the bad guy from silence of the lambs being there, but not much else. You should have reviewed "Lionheart" instead....he fights a guy wearing a Kilt in that one! That alone puts it above "Nowhere To Run"

This definitely wasn't one of Van Damme's finer moments, I understood where they were going with the ending, but it just didn't work overall. Still the fight scenes were pretty good and Roseanna Arquette was real easy on the eyes, which is always a plus.

Markuswelby1: It's true that Nowhere To Run is pretty lackluster. It needed a guy in a kilt!

Venom: It just something more and a better ending.

Last time I saw this one was in the theater and I remember being underwhelmed. It's sad because it's more or less a Kung Fu remake of Shane; and that kind of combo just reeks of potential.

We can't agree more. It has so much potential. Ted Levine as the baddie was decent though.

Ouch! Ha ha ha! With this one, I felt it was him trying to stretch and do something different other than kickboxing or whatever. I guess that's why the fight scenes were really standard and tame. But your right, Van Damme trying to play a quiet hero just made him look lost. I still enjoyed it though. It wasn't an action picture really, but I like the director and I have to agree, Rosanna Arquette was very nice on the eyes.

OH! And great review! I loved reading your view on it. It was totally different from mine. lol.

It's funny, I forgot to mention the strangely "lost" look on his face on the cover of Derailed. lol. Funny stuff!

As bad as it is, I have to vote in favor of this one. I was 12 when it came out and for some reason (now I have no idea) I really liked this movie. What would say is the best JCVD flick? Universal Soldier gets my vote, Bloodsport second.

RobotGEEK: Thanks! lol. They should have made an action movie with Rosanna Arquette as the heroine. That could have been interesting.

Dr. Blacksteed: Have to agree! Universal Soldier and Bloodsport are two of his best. Hard Target is third.

What does everyone think of Universal Soldier:The Return? Almost everybody seems to hate that film but I thought it was a pretty fun film, Van Damme's fight against Michale Jai White was one of the best fight scenes he's ever done IMO.

Dr. Blacksteed: Haha! It was also a bulletproof and Cajun mullet!

Venom: We didn't like it either. The Michael Jai White scenes were good though. Van Damme looked supremely bored and tired.

I haven't seen this since it first came out on video, meaning I was like 14, and probably thought this was awesome. I'll have to give it a look with adult eyes.

You saw this at the perfect time because 14 year olds are the ideal demographic for this movie.

It is probably worth re-viewing, but beware the lame ending!