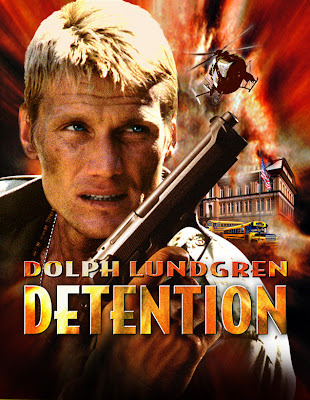 Sam Decker (Dolph) was “The Best” as a soldier in the Bosnia conflict. Now he’s a gym/history teacher at Lincoln High School. After receiving another job offer, he announces his last day in this hellhole of stupid, annoying punk kids. But then he’s put on detention duty. While babysitting a roundup of stereotypes, a group of Hungarian drug runners led by Lamb (Karzis) and Gloria (Dobo) - and of course Alek (Mif) put the school on lockdown and then start shooting at/terrorizing who happens to be left after school that day. It’s now up to the heroic Mr. Decker to get the kids to safety and take down the baddies, using only what he happens to find in the way of school supplies. Will Decker sentence his enemies to detention - permanently?

Now while it was somewhat cool to see Dolph as a high school teacher, this Nu-Image take on The Principal (1987) and The Substitute (1996) is run-of-the-mill at best. Its “Die Hard in a school” scenario turns the dumbness factor to 11 and is filled with amazingly inane, insipid dialogue, but somehow finds no time for any surprises, twists, or anything at all that would make this outing worthwhile, plotwise. This is certainly the closest Dolph has yet come to being in an urban justice-type movie. But just imagine Lethal Tender (1997) meets The Breakfast Club (1985). Now these are some REALLY Dangerous Minds. 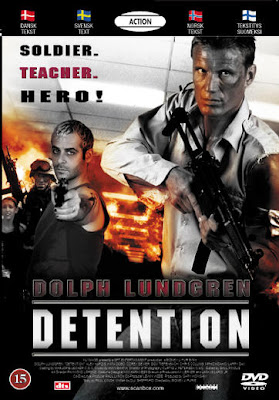 This movie is just horribly written. Besides the horrendous dialogue mentioned earlier, it’s never properly or clearly explained just why these bad guys are taking over the school. We learn once we’re deep into the film that they’re drug runners, but that’s it. Their motivation for doing what they do should have been much clearer. It’s like the writers found it hard to find a reason why antagonists would take over a school, so they just slacked off and didn’t really bother to explain it. Plus, other characters are unexplained/forgotten.

Never mind all the audience-insulting gaps in logic and plot holes, which normally we don’t point out or care about, but here it’s just so irritatingly sloppy and nonsensical, it’s not even fun. And at 98 minutes, Detention does indeed feel like a punishment. 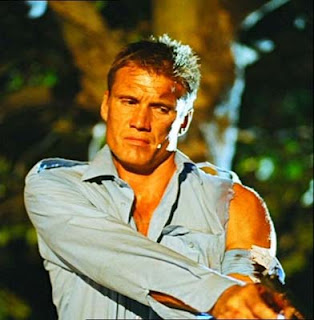 What makes it really sad is that director Sidney J. Furie has had a long and rich career that dates back to the 50’s. He’s an experienced director and really should have known better. He worked with Dolph the year after this on Direct Action (2004) and also directed The Rage (1997). What he should have realized is that this movie needed more goons for Dolph to dispatch and less super-annoying kids.

Karzis was decent as the head bad guy, but this role easily could have gone to Corey Feldman. Or, even better, Kim Coates. He must have been busy working on something nearby, as this movie was shot in Hamilton, Ontario, Canada, and Coates tends to appear in these low-budget Canadian productions.  Really, Detention is very similar to Command Performance (2009), except that here he’s the cool teacher instead of the cool drummer, and they’re trapped in a school instead of a stadium. And Command Performace is a lot better. 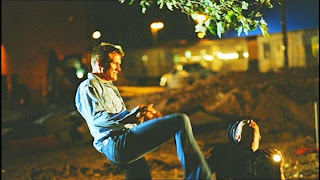 Despite the presence of  1. an exploding helicopter 2. the fact that the principal has a nameplate that says “L. Neeson” but we don’t see him, presumably implying that the principal of the school is Liam Neeson but we conveniently don’t see him after school 3. the end credits song is typical Nu-Image Nu-metal by a Nu band named “Feebo”, thus proving anything that uses the spelling “Nu” sucks, and  4. There’s a credit at the end for “emotional support”, which makes sense, because by about the 70 minute mark you’re certainly enduring Detention, not enjoying it - so  this is a movie that is kept afloat solely by the presence and likability of Dolph Lundgren. Like fellow Nu-Image production The Last Warrior (2000), this movie would be unbearable if he wasn’t in the cast.

Except for Dolph, this movie is so lame, it makes “Teach Tony Danza” look like a bad-ass action movie. Watching this crud is like fingernails on a blackboard.

Another Dolph Movie I've bought, but never got round to finishing

It is one Dolph's weaker efforts. If if just had some energy and originality to it, it would be worth watching.

I strongly disagree with you on this one, I thought Detention was a pretty fun Die-Hard rip-off, I honestly never even noticed that there was no explanation for why the bad guys were taking over the school, I was having too much fun to care. Love the scene where the one kid in the wheelchair takes out a mook with a battering ram, I didn't find the kids annoying myself, I found them kinda likeable actually.

Pentathlon was alot worse then this film if you ask me, I know it was a very personal film for Dolph, but I just found to be a total borefest with too little action and a really lame villain.

I actually like this one a lot. I thought the metal shop scenes were pretty cool. Then again, I'm a sucker for Die Hard in a Blank movies.

wow, for some reason I've never heard of this one. Now I know why. lol. Will avoid at all costs. Thanks for the warning! Great review!

Venom: Pentathlon at least has the scene with the German guy and the boombox! Detention had too many irritating characters and brainless moments to rise above of what it could have been...in our humble opinion. It should have like the The Substitute series (especially part 3).

Videovacuum: They are certainly a lot of "DieHardInA" movies to choose from. This is not one of the better ones in our opinion. Dolph didn't beat anybody up with a yo-yo like Karl Thomasson did in The Substitute II: School's Out, or any cool inventions like that.

True, this film never approached the awesomocity the Substitute sequels attained but it was still fun.

RobotGEEK: No problem! Thanks for the nice words as usual!

Videovacuum: Definitely agree about the awesomeness of the Substitute series. Which one is your favorite?

Totally agree with that! 1 and 3 are the best. 4 was good because it had Angie Everhart and Patrick Kilpatrick, but 2 was lacking.

For me, the 4th Substitue film was the weak link, it had a great villain but little else, it moved too slowly and just wasn't very memorable overall.

Definitely agree with you, Venom. the 3rd was one of the best, and it was hard to top. Maybe one day, they will make a 5th installment...with Tom Berenger and Treat taking out more annoying criminal students!

This passed me by hadn't heard of it.

I can see why. There are better Dolph flicks out there.

I had a lot of fun with this one, mostly on the so-bad-it's-good level, and maybe that's the Dolph factor kicking in, but I've used it on a bad movie night to great success. The first time I saw this was on USA at 9AM on a Saturday, and I tried to imagine what it would be like for an 8-year-old looking for cartoons to come across some kids slashing at a bad guy with the blade of a paper cutter. Also, have to love the car crashing through the cement wall. It just doesn't get much sillier.

We agree, Detention was really silly and it is good fodder for bad movie night with friends, but it wished the quality was a little higher.

I don't love this but I don't hate it. The main bad guy shitted me to tears but Dolph brought it, so that was redeeming for me!

that's too bad. it always makes me sad when a die hard-ish premise goes to waste.

Explosive Action: Totally agree about Dolph! He was good as usual, but the villain was irritating beyond belief.

Saturdaynightscreening: It was very unfortunate. This should have been so much better.

Never knew that Sidney J Furie had worked with the Dolph! He directed The Ipcress File which I love. And like you say in the review his CV is all over the place.

The Ipcress File is a classic. Direct Action was a better Furie\Lundgren team-up.

I love Dolph and usually I enjoy the high school setting (especially scenes where mouthy teens get beaten up) but this was a pain to watch.

The Principal and the Substitute are far better movies. You should do a review of the Principal.

We totally agree. We thought a high school-set actioner with Dolph would be a sure-fire winner. That's what makes it all the more disappointing.

We have already reviewed 2, 3 and 4 of the Substitute series and Class Of 1999 II: The Substitute is a upcoming review!