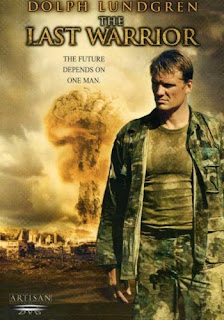 AKA: The Last Patrol

A 9.5-level earthquake struck California, turning it into an island. The survivors living in this harsh new reality refer to it as “A.E.” or, “After Earthquake”. Army Captain Nick Preston (Dolph) visits a junkyard inhabited by Army lady McBride (Alexander), a man named Lucky Simcoe (Burke) and his perky but somewhat annoying wife Candy (Cross).  They all must learn to get along, as well as dodge pitfalls like a disease that causes large, moving boils on your skin, and an insane prisoner (Juliano Mer). Meanwhile, Preston wants to save a bus filled with children led by a woman named Rainbow (Parker), who may or may not have the ability to make it rain. Perhaps she should avoid the post-apocalyptic strip clubs. What will become of these people?

Starting with some narration by Dolph which explains nothing really, we realize we are in for a run-of-the-mill post-apocalypse slog. It seems, in retrospect, that The Last Warrior was doomed from the start, as a. it was shot during a period when Dolph was hitting the skids, b. It’s a Nu-Image production from the same period, c. It’s rated PG-13 so you know nothing REALLY awesome is going to happen, and  d. It’s a talky low-budget drag with minimal locations. 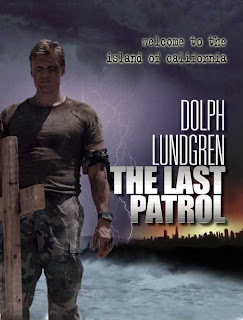 What this SHOULD be is Dolph doing Mad Max (done the right way) - He should be a true “Last Warrior” who fights baddies violently and on his own terms. Instead, it’s a boring production about an encampment filled with annoying characters who you can’t possibly care about spouting pseudo-funny dialogue. Solely the strong presence of Dolph keeps this movie from Iron Thunder (1998) territory, although a more accurate comparison might be to Digital Man (1995), a similar desert-set “ensemble” film.

Director Lettich, who is known for his Van Damme (or Daniel Bernhardt, same difference) productions, shot this in Israel, also where he shot the JCVD vehicle The Order (2001). While that is interesting, the bottom line is that The Last Warrior adds nothing to the genre. But the real crime is its dearth of action. This truly is a case of a movie needing less talk, more rock. Instead of talking our ears off, Dolph should be making a necklace of them. 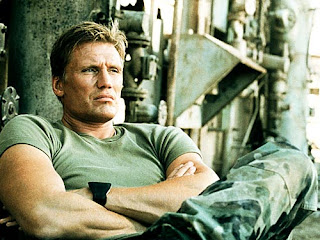 Nothing happens in this babyish waste of Dolph. It’s one of his worst movies, easily the equal to Agent Red (2000) in terms of audience letdown. The Last Warrior is for Dolph completists only.

Totally agree. It was a complete bore and with a name like "The Last Warrior", you expect "some" kind of action and it barely had any.
Such a wasted opportunity.
Great review!

Thanks! This was a huge dud. One of Dolph's worst movies.

I thought it was a TV movie?

The cover looked kinda cool. The title is pretty cool. And though Lettich hasn't done anything really badass since his early Van Damme days, I still had hope that they could've put something together much better than this. It felt more like a lame melodrama or something. It needed way more mindless action. lol.

Nu-Image films are usually pretty entertaining, but this one was really mediocre and forgettable, it's not quite as awful as Last Inquiry, but that's pretty much the nicest thing I can say about this film.

RobotGEEK: You're 100% right. We agree with your thoughts and the movie certainly didn't live up to its promise to say the least.

Venom: The Final Inquiry was not as awful as this. Our upcoming review for Iron Thunder talks about how it is one of the worst movies we have seen to date. We think it is worse than The Last Warrior.

Last Warrior at least had Dolph, Iron Thunder had absolutely nothing to offer except headaches and annoyance.

I wasn't questioning it's pedigree. It just seemed like a TV movie (of which I turned off after 20 minutes)

You're right, we wanted to turn this crud after 20 minutes, but we soldiered through! Sorry for the misunderstanding.

Have you guys seen this?

Really? I thought Iron Thunder was pretty entertaining, it sorta reminded me of that Gary Busey film Bulletproof in that it revolved around a futuristic tank being stolen, plus Richard Hatch was pretty fun. IMO Final Inquiry was just a total shitfest from beginning to end, it looked REALLY cheap and had horrible acting from everyone, Lundgren looked like he was bored to death through the entire shoot and it was just a really tedious slog in general, hell, Iron Thunder was like Face/Off compared to that film! If you want to know the true definition of a bad action film, then try watching one of those no-budget DTV titles from Maverick Entertainment like The Locator.

Lee: Haha, great find! Would love to see a rematch one day.

Venom: We have to disagree about Iron Thunder. It was just a real tough sit. Heard of The Locator, heard that was pretty awful too! Haha.

Yeah, you should stay clear of pretty much anything by Maverick Entertainment, most of their films are "tough sits" as well, crap like Game Over, Hoodrats, Bottom Out, Hip Hop Task Force, Darkhunters, Rap War One, etc. At least Iron Thunder had Richard Hatch, Maverick's usually have a bunch of no-name actors plcuked right off the street.

I have seen one of those movies you mentioned and it was Hip Hop Task Force. That was pretty terrible!

Agree with you on this one. When the woman literally makes it rain (don't want to confuse people after your post-apocalyptic stripper talk), it was like the icing on a cake totally sauteed in wrong sauce.