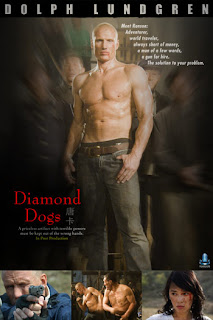 
Xander Ronson (Dolph) is an American ex-Green Beret laying low in Inner Mongolia, of all places. He’s deeply in debt, and fights in...wait for it...illegal underground Punchfighting matches to make ends meet. Brought before a judge, it is determined he must finally pay all his debts or go to prison. Luckily - or perhaps not - this is just when snobbish jerkbag Chambers (Shriver) offers Ronson a lucrative job. He hires him to act as security as he travels with his team to go deep into uncharted territory to find something called the Tangka - a Buddhist tapestry said to be cursed. With few options at hand, Ronson reluctantly accepts.

The beautiful Anika (Yu) is the stepdaughter to chambers, and following her is likely what truly entices Ronson. In addition to trying to get the Tangka and all the pitfalls they encounter along the way, another team of baddies is chasing them, and these guys will stop at nothing to get it. Who will end up with this sacred artifact? (Meaning the Tangka, not a DVD of Diamond Dogs).

At the outset when we see Dolph somewhat down on his luck, and Punchfighting in another land, it immediately brings to mind Sweepers (1998), where similar things go on. Dolph, with his shaved head, looks especially grizzled here, and that’s to his credit - he does a nice acting job, and with little flash. There’s plenty of violence on show, leading the viewer to conclude this is a worthy Dolph adventure story, more or less. 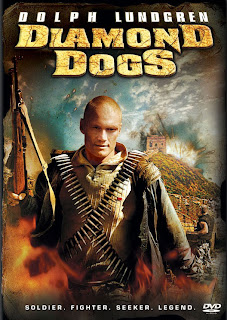 While this “Saturday afternoon adventure” falls somewhere between big-budget opuses like the Indiana Jones series and Direct-To-Video items like Skeleton Coast (1988) or Laser Mission (1989), it’s reasonably well-made and has some impressive locations. It should also be noted that there’s a reference to the Stallone classic Over the Top (1987) hidden in the movie somewhere. See if you can find it.

Shriver, in his first credited movie role, plays the obnoxious, hate-able baddie whose hairstyle isn’t just a ponytail - that wouldn’t be irritating enough - it’s actually some sort of ponytail bun, also does a noteworthy acting job, assuming his personality isn’t really like that in real life. Ronson shows amazing patience with him - this movie would get five stars if after the thousandth snide, catty remark Chambers makes, Dolph just punches through his face, but alas, it’s not to be. In a big budget version, we felt Kevin Spacey could have played Chambers. 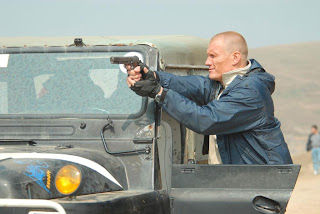 Although the film is called Diamond Dogs, neither diamonds, dogs, nor David Bowie are anywhere in sight. Interestingly, it can be surmised that the writers of the film are glam rock fans, judging by the title and the choice to name Dolph’s character Ronson, presumably after Mick Ronson, who among other career achievements played with David Bowie. And seeing as there were supposedly production problems on this film, and a presumed sequel got axed, Bowie can never make a cameo in the future.

Despite pockets of dullness that spring up throughout the film, Diamond Dogs is a decent Dolph outing. It won’t blow your socks away, but for a later Dolph it’s a good one-time watch.

Wow, I have to disagree with you on this one. I enjoyed the short underground pitfighting segment but man, this was cheap cheap cheap. The bad guy was awful and Dolph looked utterly bored.

Whoa dude, Dolph is too much man to handle at this hour!

But the movie, I remember it being fairly decent. You do a good review here. It's not something I'm salivating to watch ever again but I enjoyed it.

This one was merely decent for me, the action was OK, but the bad guy was just plain annoying and the ending kinda sucked. I personally found Laser Mission and Skeleton Coast more fun then this film.

BTW, I always felt Sweepers was one of Dolph's more underrated films.

Explosive Action: Yes, the bad guy was really annoying and it did have a junky feel to it, but we felt there was enough decent entertainment so we gave it a pass.

Mr. Gable: Haha, we agree you don't need to rush out and see this but if you happen upon it, it is a good one time watch.

Venom: We agree, Laser Mission and Skeleton Coast (review coming soon) are more fun than this one. Everyone seems to agree that William Shriver was really annoying as Chambers! Our Sweepers review drops tomorrow, November 19th!

I enjoyed this movie more than I thought I would. The dancer woman was actually pretty good.

The pictures looked so great, when coming across it first..but the film was dissapointing...hope Black Jack gets a review, too..or have I missed that?

Glen: It was surprisingly good. It is always worth giving the direct to video Dolph movies a chance!

Hellford: There may be a Blackjack review in the future, but we have no plans to review this one for Dolph month. You did not miss it!

Well done guys! As there are better films in his filmography you've suggested recently from your reviews, I'll probably put this one on the back burner unless I come across it for free. lol.

Good idea! Free is the perfect amount to see this.

I'm glad you had fun with this one, because I did too, but I know others didn't. Also like your picking up on the glam rock references. Speaking of Ronson, one of my favorite Morrissey albums is Your Arsenal, which Ronson produced.

Brett agrees with your opinion about Your Arsenal. If there are any rock references, we will find them!

This is quite the odd ball Dolph film which I keep revisiting. Sometimes it's tolerable while other times it can easily be bland fun. Rereading this, nice eye for the Sweepers type material to be found here since Dolph seems to have a habit for putting in actual social commentary in all of his films (Skin Trade for instance tackles the human trafficking topics but yet comes off as another Rambo/Commando/Taken vehicle despite it being written well before that signature Liam Neeson comeback film).

Previously, he starred in Missionary Man which while noted as being his homage to Clint Eastwood's PALE RIDER, comes off more as another Men of War rehash let alone is marketed to the same crowds who wanted to see The Rock and Kevin Sorbo kick ass in the WALKING TALL rehashes.

Kudos once again on the David Bowie references as he's deeply missed by all and it couldn't had been better inserted here. :)

You're absolutely right, this is an odd Dolph film, just like the ones you mentioned and one of the weirder ones, The Minion too.

Bowie will be missed. Happy you liked the references.

LOL, still have to see The Minion; it came on late night cable TV for awhile and I think got released in other countries under another cut and name. In fact, I think as a result both cuts are entirely different movies but because of the reportedly lesser quality, it would be mainly for hardcore cult moviebuffs if they are that tempted to see what the fuss is all about.

That's interesting about the different cuts and names. We also like to hear about that. Not much fuss in our next of the woods for the Minion, but it's worth seeing.

My bad, not the UK or US cuts, apparently this exclusively in Germany.

Damn Germans! They hate violent movies over there. This wasn't too bloody, or maybe we've become desenestized to awesome Dolph violence. Haha.