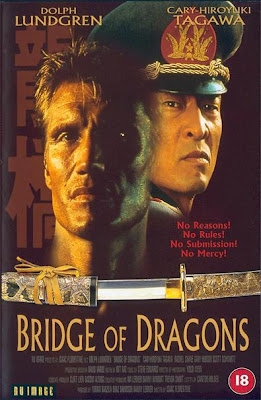 
At some time in the distant past, or perhaps the remote future, the dastardly General Ruechang (Tagawa) rules the land. His dictator-like tactics have begun to stir a popular revolt. But before Ruechang can have total authority, he intends to marry Princess Halo (Chow). Halo doesn’t want to be anywhere near him, so in her off time she puts on a mask and competes in stickfighting matches with the burly guys of the local village. One of those guys is Warchild (Lundgren), a member of Ruechang’s retinue. When the Princess runs away, Warchild is assigned to find her and bring her back. Naturally, they fall in love and begin to fight against Ruechang’s evil empire. 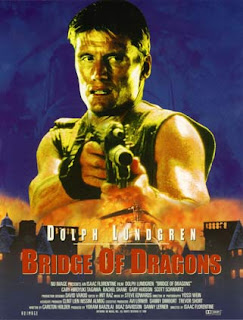 There’s a lot to like about Bridge of Dragons. It’s a throwback to the classic post-apocalyptic films we all love from the 80’s. But it has the well-choreographed fights and constant violent action that director Isaac Florentine is known for. Besides the VHS-era post-nuke flicks, a diverse array of influences make up the style of Bridge of Dragons: For one, it’s hard to ignore the influence of the video game Street Fighter. Ruechang is M. Bison, Warchild is Guile and Princess Halo is Chun Li. Then we have the relationship between Halo and her governess, Lily (Kendall). Any student of 9th grade English can see this was highly influenced by Romeo and Juliet. And towards the end there’s a scene reminiscent of The Graduate (1967). 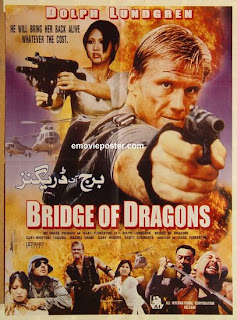 So, to recap, cross Italian post-apocalyptic thrillers, Street Fighter, Shakespeare, and The Graduate, set it in a fairy-tale-like land and load it up with action and stunts and Dolph Lundgren, and there you have it. Does this sound weird? Well, it is somewhat odd, but it’s entertaining and not boring. So that’s important.

Tagawa returns as yet another baddie, facing off against Lundgren once again (he was also the antagonist of Showdown in Little Tokyo, 1991). You gotta love his “666” logo on his buildings and vehicles. But this time he, and all the other characters, are in a more tongue-in-cheek world, with really wacky sound effects and some silly humor. Bridge of Dragons recalls Raiders of the Sun (1992), in the fact that the hero and the girl are on the run, they fight the baddies together, it’s post-apocalyptic, or at least futuristic, and the element of rebels and revolution is introduced amongst all the shooting and blow-ups. One is the Richard Norton take, the other the Dolph Lundgren take on a similar situation. 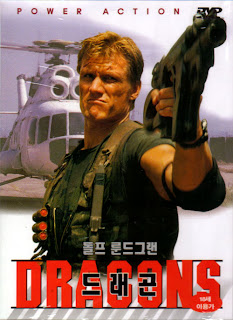 Like the film of the aforementioned Street Fighter (1994), it all ends in a freeze frame. But don’t you think Dolph makes a better Guile than Van Damme? Street Fighter aside, Bridge of Dragons is classic late-90’s Lundgren with a few unorthodox twists.

This one didn't quite work for me, but at least it was different enough to make it memorable. (It felt like Dolph Lundgren's Fractured Fairy Tales.) I may have to give it a second chance somewhere down the road.

I really enjoyed this one for it's everything-including-the-kitchen-sink approach.

Videovacuum: That's what we liked about it too. It was little different, but it had a lot of good action in it.

Man, I totally misjudged this one. I keep wanting to see it, but the U.S. cover makes it look like a drama. So I've never given it a chance. I almost even watched it last night, but decided to watch Above the Law instead. lol. Tonight, its on!!!
Great review man!

Awesome! Looking forward to your opinion of it.

love this one.. high rewatchability.

Agreed. This was a lot of fun! Hopefully Dolph and Florentine make another movie soon!

Haha, you can predict the future, buddy! The Punisher is the final movie we are posting for Dolph Month! It drops November 30th.

Hell yea! Can't wait to get your view on it. I actually just watched he workprint version a few weeks back with a whole 16 minute deleted alternate opening that gives it a completely different feel. I still need to do a quick write up on that one.

Thanks! Will have to watch the workprint version too one of these days. We watched the director's cut.

This is up there as one of my all time favorite Dolph Lundgren flicks. It has everything, from the action, to the silly plot, to the special effects-- the flaming table on a string was the best! I'm really glad you enjoyed this one too. Great stuff.

It is easy to enjoy this one, for a Nu-Image, this is pretty entertaining!