When his son Michael, who is an undercover CIA operative, is kidnapped and imprisoned by the Angolan army, his father Col. Bill Smith (Borgnine) snaps into action and assembles a team of inter-racial mercenaries to travel deep into Africa to free his son. This team includes, but is not limited to: Smith himself, Blade (Vosloo), Toshiro (Kwong), Sam (Mulford), Chuck (Kennedy) and Rick (Greene). All have their specialties in the fighting arts. On the side of the baddies we have Col. Schneider (Vaughn), supposedly an East German with some interests in the Angolan army vs. the rebels, and Capt. Simpson (Reed), yet another character who has his own interests. Add to this mix Elia (Lom) and you have a desert/jungle adventure best suited to Saturday afternoon viewing.

Clearly, the only real reason to see this movie is its incredible cast. Our hometown hero Ernest Borgnine leads the pack with his engaging and always-upbeat performance. It really is a pleasure to see him shooting machine guns along with all the younger cast. We also always love to see Oliver Reed doing what he does best - yelling crazily - whether he technically has to be there or not. He plays a very similar character here as he does in Rage to Kill (1987). Robert Vaughn brings his distinct voice to the proceedings, and a fairly early performance by Arnold Vosloo completes the picture. Interestingly enough, he met and married co-star Nancy Mulford when they met on this film. See, Skeleton Coast really brings people together. 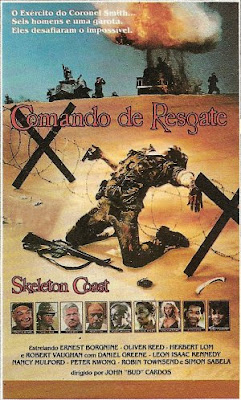 While the many stars on show will draw viewers in, and there is plenty of beautiful scenery and such, the movie is kind of flat and feels like filler at times. It also has some wacky musical stings that seem inappropriate. Really, this is just a star-studded Exploding Hut movie, and it’s also a bit overlong (probably to try to accommodate all the characters).

On the technical front, if you watch this on Netflix streaming, the colors are soft and faded. On the Nelson VHS, that is not the case. The movie looks a lot more normal, with sharper colors. If you opt to buy this movie, look for the Nelson VHS. 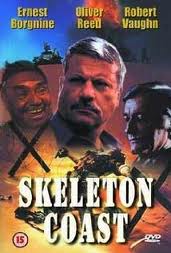 While the wonderfully jolly Ernest Borgnine is a personal hero, Skeleton Coast really is nothing overly good OR overly bad. It’s kind of somewhere in the middle. If you’re a fan of any of the stars involved, and you’re okay with that, do proceed.  If not, your time might be better spent elsewhere. If Skeleton Coast was The Expendables (2010) of its day, then Ernest Borgnine truly is the original Stallone.

Comeuppance Review by: Ty and Brett
Posted by Ty at 7.3.12

Troma also released this film on DVD and that version looked better then the one on VHS, so that's the version you should go with. Anyways I pretty much agree with your review, it's worth watching the film just for the cast, but aside from that it's not a particularly memorable film.

BTW, did you ever seen "Silent Assassins" which also had Borgnine and Linda Blair?

We have seen Silent Assassins. It is a fun movie! Review coming soon. Borgnine isn't in it.(That would have been awesome though) Sam Jones and Phillip Rhee co-star. Haha.

The cast is excellent, the movie is just ok.

Totally agree about the Borg-ster! Haha, heard he said that, that's why he is over 90 years old and still working!

Oh my mistake, the film I was actually refering to was Moving Target.

Ah i see. Heard that was pretty goofy too. Haven't seen it yet. How is it?

It was a pretty fun film, I remember it had a lot of nudity from one of the female co-stars.

Cool! Will definitely check that out.

The cast is very intriguing, and I agree, sometimes that's enough to keep one involved. I'll have to check it out sometime.

Would be interested in your take on it. It is always cool to see Ernest Borgnine in an action role.

That really does sound like a killer cast, and with Borgnine running around with guys half his age shooting guns, well that just rules. Great review!

Thanks once again! Borgnine shooting guns is always cool to see and really funny too!