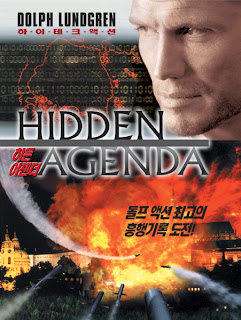 Dolph plays ex-FBI agent Jason Price, a man who runs some kind of witness protection program. When a ruthless assassin called “The Cleaner” is bumping off supposedly protected people, Price must slowly unravel a complex series of lies, deceits, betrayals and double-crossings.

What happened with this film is - it’s mid-period Dolph and got lost in the video store shuffle. It’s in some kind of nether world between his classic 80’s and even 90’s outings and his current renaissance. It’s hard to imagine someone in ‘01, while perusing their local video store, not just giving the cover a cursory glance and then moving on. But we can see why Dolph took the role. It’s different. He probably yearns to play reasonably non-meathead-y roles like this. In Hidden Agenda, he’s smart, he’s good with computers, and in his cover as a suave restauranteur, we see his classy side. We applaud this change of pace, but that’s not enough to make the movie GOOD, unfortunately. 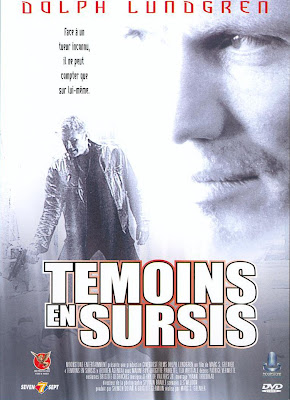 Despite the film’s strengths, when the film begins, the audience is treated to a jumble of names and situations, as if the filmmakers assume we already know what’s going on. So after some more muddled plot developments and frustrating computer gobbledygook, the movie is halfway over and we’re not hooked in and involved with the plot. Even Dolph seems bored a lot of the time. Add to that some confusing and characterless “intrigue” and the end product is what best can be described as an arrested development in the Dolph canon. Yes, there are some nice changes of pace, but at what cost? 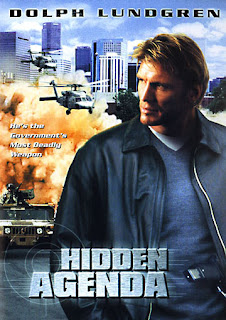 Plus there are some annoying editing tricks and techno music during the scant fight scenes. The problem is, this film doesn’t EARN the tricks. It seems like a cover-up for a lack of something. And therein lies the crux of the matter: The filmmakers should have cut a lot of the fat and talkiness and stripped down the film to a race-against-time battle between Price and The Cleaner. Assuming it was done correctly, this would have given the film the turbocharge it needed to be successful. Sadly, instead, with the technology on display (Icarus and Daedalus?) it’s like watching a dramatization of an episode of “90’s Tech” on the History Channel. 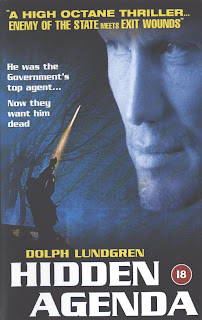 We see what the filmmakers were trying to do...had this film come out in the theater it would have starred Matt Damon (doubtlessly wearing glasses) and been a slick Hollywood thriller like Paycheck (2003) or Hackers (1995). So imagine that formula applied to a Canada-shot DTV product with Dolph Lundgren and there you have it.

In the case of Hidden Agenda, different does not necessarily mean better for Dolph fans.

For me, this one is strictly a film for Dolph fans. It really doesn't have anything else for anyone else; and as you know, I'm as big a Dolph fan as it gets, so this one worked for me.

Wow, never a good thing when there's not one redeeming quality in a Dolph flick. Bummer. Great review though!

DTVC: Can't agree more. This is for Dolph fans only.

RobotGEEK: Thanks! This is not even the worst Dolph we have seen. Those honors go to Agent Red and The Last Warrior! haha.

Well for me in this case, different WAS better, the action scenes though scant were sitll well done, the camera edits didn't really bother me much, also the acting from the supporting cast of Douriff, McDormand and Zeterling was pretty good, Dolph's been better, but he still got the job done well enough, overall this film had the same intrigue that Hidden Assassin did and I found it compelling enough to be worth a watch, certainly moreso then The Quest anyways.

We liked the 1990 Hidden Agenda also. Solid thriller. Brian Cox is always good. The 2001 Dolph Hidden Agenda was ok, but it should have been better. Too much computer jargon for no reason. Haha.

I've seen the other Hidden Agenda on the shelves at Family Video but enver got around to checking it out, i will now though.

There is another movie called Hidden Agenda too! It is from 1999 and it stars Kevin Dillion and J.T. Walsh. It is an ok thriller.

Also that is cool that you live near a Family Video...all our video stores in Hamden, CT are gone.

Yeah, I actually live near two Family Video stores, good thing too as I really missed Hollywood Video after they closed down. BTW have you ever chcked out any films on VCD? I heard that VCD's will play on most DVD and DVD-rom players, I recently ordered the Fred Willimson film "The Rage Within" on VCD from YesAsia because that was the ONLY place I could find that film.

Always wanted to see that Fred Williamson movie! Tell me how it is when you watch it. Will have to check that out on VCD. We can play them on a PS3.

"This is not even the worst Dolph we have seen. Those honors go to Agent Red and The Last Warrior! haha.2

I actually enjoyed this, and Agent Red as well... not my favorites, but I had decent fun.

Happy you liked it. This wasn't bad at all. If they toned down the computer jargon and the techno music, this would have been a solid action flick.