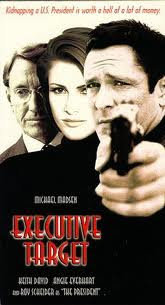 
Nick James (Madsen) is a professional stunt car driver who is on his way to prison. While riding the prison transfer bus, Lacey (Everhart) and the stupidly-named Clay Ripple (Williams) manage to break him out and he escapes. They do this because they are the minions of super-villain Lamar (David). Lamar hears that Nick is the best at what he does and they want him to be the wheelman for a bank robbery. Nick wants no part of it, but they kidnap his wife Nadia (Christopherson) and say they will kill her if he doesn’t comply. But there’s something bigger afoot: to quote the movie’s tagline, “Kidnapping the President is worth a hell of a lot of money”.  So while Nick does technically kidnap President Carlson (Scheider), The Prez is sympathetic to Nick’s situation and they vow to take down Lamar’s terrorist organization. 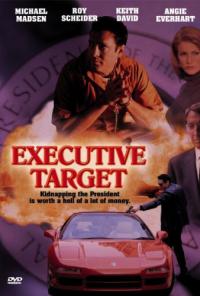 PM once again delivers the car-flipping-over-and-exploding-in-the-middle-of-the-street goods, at least in the action department. Sure, the chase scenes are overlong and contain some classic cliches (fruit carts and women with carriages, the only thing missing was two workers carrying a large pane of glass), but, like Last Man Standing (1996), it seems Pepin & Merhi were trying, even STRIVING for theatrical quality. It doesn’t quite make it, but at least they’re trying, unlike many of their competitors.

One of the more convincing reasons to watch this movie is the cast. We didn’t even mention Robert Miano and Matthias Hues. Sadly, it’s a nothing role for Hues, as he plays Vic, a bank robber who gets shot (remind you of any other Michael Madsen movies?). He doesn’t appear until forty minutes into the film, and has only one line of spoken dialogue: “I Can’t”. Unless you count some of his moanings and groanings while he is wounded. Gareth Williams is hate-able as Ripple, Keith David goes way over the top as the main baddie, but what do you expect of a criminal mastermind with an underground command center so large, it has its own name - “Area 55”? But somehow the authorities don’t know this place exists. Maybe that’s because it’s “two hours outside L.A.”. Because nothing exists there, right? 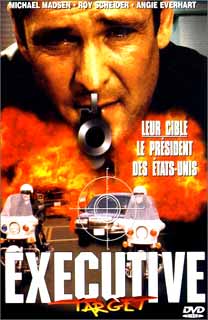 Scheider plays exactly the same role he does in The Peacekeeper (1997) (why is he even here?), Madsen is laconic, and Everhart is fun to watch as she plays the villainess with the permanent scowl on her face. You gotta love the banter between some of the characters, it’s priceless (well, more groan-inducing). Especially the scenes with Nick’s buddy Bela (Callie). 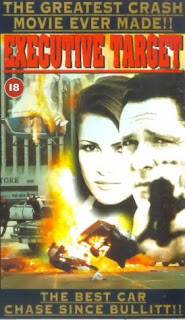 If it’s car stunts and blow-ups you seek, look no further. This movie exemplifies the PM credo that multiple, gigantic explosions and cars flying and flipping every which way need not make sense or have any justification - it’s just awesome to watch and can be highly entertaining, if in a pretty dumb way. But these stunts took a lot of work and effort to pull off, and we recognize and respect that. These are REAL stunts, not CGI garbage. We wholly support the true stunt/pyrotechnic masterminds behind Executive Target.

I see this movie on every now and then, I'll think will record it and save it for a rainy day. I am rather partial to car crashing and flipping.

One of the very best PM flicks. My buddies and I used to pull the "Cherry Coke" gag whenever we'd go through a drive-thru. Classic stuff. Great review.

This is The Video Vacuum by the way; for whatever reason Blogger isn't letting me log in.

Video Vacuum: Thanks! Blogger can be very weird sometimes. Also PM made movies you can quote and always enjoy.

Yeah, this is one of PM's best films, it was interesting to see Madsen play the good guy for once. Also Roy Schenider played the president again in the Die Hiard rip-off "Chain Of Command"

Venom: Totally agree. This ranks up there with The Sweeper and Recoil! Always wanted to see Chain Of Command for the Scheider factor.

John: Thanks! We are happy we have reminded you of it. Madsen at his gruff best.

Oh yeah, this one was fantastic. If PM can blow stuff up to this degree in the 90's, there is no excuse why modern DTV can't.

It was really Michael Madsen's face that perked me up to this. I've got to see this one, it's been a while since I sat down and just let myself enjoy the glory that is excessive exploding cars. Great review!

Thanks! There is a lot to love about excessive exploding cars! It is an underrated form of entertainment.

I've been meaning to do this one for a while now, so I skimmed the review, but it's good to see that you gave it three stars. Will have to check it out.

It is definitely worth watching especially if are a fan of PM or Madsen!