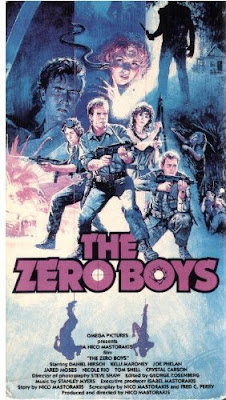 
Steve, Larry and Rip (Hirsch, Shell and Moses, respectively) and their girlfriends, Jamie, Trish and Sue (Maroney, Carson and Rio, respectively) go deep into the woods of California for a paintball expedition. You see, the aforementioned dudes are “the best” at paintball. Surely something to be proud of. Collectively they are known as “The Zero Boys”. After holing up in an old cabin, the young adults are stalked by a murderous madman and the terror begins. Will they ever get out alive?

Like Masterblaster (1987), The Zero Boys is a mix of popular genres of the time, borrowing from survival movies, wilderness horror, slashers, and even Romps (what we call 80’s teen sex romps for short). Imagine a not-as-good take on Just Before Dawn (1981) mixed with Friday the 13th (1980) (Jason is even mentioned in this film, as is Stallone, so it’s no wonder this movie must have been seen by the Saw (2004) and Hostel (2005) filmmakers, who clearly stole from some of its horror elements and must have liked its “ironic self-reflexivity” which also paved the way for the Scream series). Of course, throw in the paintball from the aforementioned Masterblaster, and this is what you get. 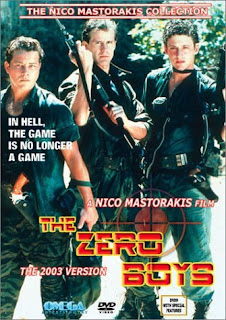 On the down side, the ‘Boys are unlikable and you don’t care about their plight. If they’re being picked off one by one, so much the better. Not a lot happens in this movie, and the last third is very hard to see, as it’s at night in the forest with minimal lights. So there’s minimal action AND you can’t see it. If the characters weren’t so annoying, this would be a different experience entirely.  Plus there’s no main, recognizable, understandable villain. That’s also a major no-no.

On the up side, in the first half of the movie, there is some energetic and interesting camerawork, as well as some cool music by Hans Zimmer, who later became a soundtrack big shot. There’s a lot of un-PC dialogue which is always great and preserves the “totally 80’s” vibe. 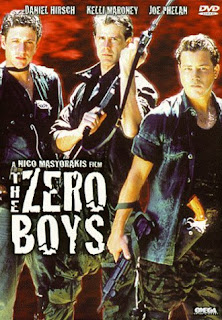 Just imagine director Mastorakis’ take on 8mm (1999) meets White Fury (1990), crossed with his own Nightmare at Noon (1988). While movies like this never get credit for being ahead of the curve, as discussed in our Bloodmoon (1997) review, The Zero Boys has what must be the first Taser on screen (and what a Taser!), as well as some pioneering use of video as part of the plot. But the problem is that it is all over the map genre-wise. So was Masterblaster, but that worked and this doesn’t, mainly because it takes itself so seriously and has jerks for protagonists. Sadly, Mastorakis seems to lose interest as the movie goes along, and the movie suffers for it. Not surprisingly, the viewers’ interest wanes as well.  All they had to do to turn this movie around was to give it some characters you care about and a strongly defined villain. But no. Apparently that was too much to ask. There’s really no excuse for these silly errors.

Released by Lightning Video, The Zero Boys starts out not without some merits, but it’s like starting at the top of a rollercoaster that goes slowly down into a valley but never comes out of it.

I think Rob Lowe was in Hostile Intent, not Eric Roberts, but that would have been good casting! Haha.

Oh yeah, my bad! It was still a pretty good film though, this one was just OK like you said.

It could have been better. It needed more Joe Estevez!

I got a copy of this recently. Looks like I better not expect a lot from it then!

If you keep your expectations low, it's not so bad. But it could have been a lot better! It's okay to have this in your collection, I do!

I'm slightly disappointed to hear this wasn't the greatest, because it's been on my to watch list for a while now.

It leaves something to be desired but it is a decent one time watch.