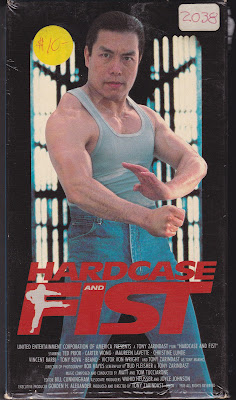 Bud McCall (Prior) is a good cop. But he was framed on a drug charge and sent to prison. The only person that believes he’s innocent is his hot wife Sharon (Lunde). His cellmate turns out to be none other than Eddy Lee (Wong), a trained Martial Artist. Bud’s main goal is to testify against Vincent Ciccetti (Barbi), the man that put him in prison. That would end his nefarious Mafia dealings, as well as clear Bud’s good name. To prevent this from happening, Ciccetti sends out crime lord Tony Marino (Zarindast) and his goons to take down Bud. However, Tony and Bud were in ‘Nam together and have a history. So who will win out: The gangsters over here, the gangsters over there, or the newest, most heroic crimefighting duo in town: HARDCASE AND FIST?

Not to be confused with Hardcastle and McCormick, from the opening shot of Hardcase and Fist, you know you’re in for a completely inept treat. The amateurish cinematic stylings of Tony Zarindast must be seen. While he doesn’t quite reach the heights of fellow traveler Amir Shervan, Zarindast certainly creates a silly world of his own, probably unintentionally.

Ted Prior, in a fairly unusual non-AIP role, has a killer mullet and also sports a beard, which is a change for him. He has strong screen presence as always, but he whispers/mumbles his lines. Add to that the fact that Carter Wong has serious issues with the English language, as does Zarindast, and the sound on this movie is horrible (it sounds like the actors are in a tin can in a bathroom). So from an audio standpoint, Hardcase and Fist leaves a lot to be desired. On the pure stupidity factor, this movie is pretty high up there - for the prison sections of the film, try to imagine a DUMBER Bloodfist 3 (1992). Let’s just put it this way: The warden’s name is Borden. That’s right, Warden Borden. The sight of this man certainly would strike fear into the heart of any new prisoner. 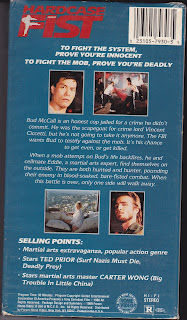 As far as Carter Wong is concerned, despite  his English deficiencies, he more than makes up for it with a panoply of hilarious faces and gestures, not to mention noises. It seems he can’t hit an opponent without belting out a hearty “Bllooooaaeeeeeaahhhh!!!!” As far as his acting ability, he’s from the same school as Leo Fong and Don "The Dragon" Wilson in the wooden-monotone sweepstakes. However, it’s great company to be in. Plus, there’s a pre-Mike Tyson ear bite. So...there’s that.

The eternal question of who exactly was the boss on “Who’s The Boss?” kept viewers debating for years with their own theories, which kept the show going in the hearts and minds of viewers for decades, ensuring its longevity. It truly was a shrewd move for the writers of that show. Truly Tony Zarindast had the same ploy in mind for the power-team of Hardcase and Fist, because it is never actually explained who is Hardcase and who is Fist. Neither of those names are uttered in the movie. So it is up for viewer debate: Is Ted Prior Hardcase? Or is he Fist? What about Carter Wong? He makes a good (hard)case for having the title of Fist...or maybe it’s a surprise move: TONY ZARINDAST! Or maybe it’s Beano as Bruno (don’t you dare confuse them). We welcome your theories on why you think who is who. 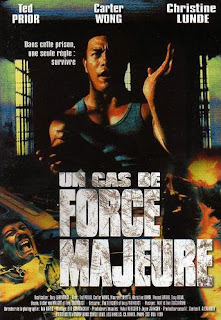 Other highlights include a killer aerobics scene (we’re suckers for those) and the great song by Debbie Tucciarone, “I’ll Be Coming Back”. Also, Fritz Matthews is credited as a stuntman.

For a funny, ridiculous good time that only could have been confected in the golden year of 1989, and released by Forum on VHS back in the day, don’t hesitate to pick up Hardcase and Fist.

Loved Carter Wong in Big Trouble in Little China. I'll have to look for this one. Seems like fun.

It really is. It is Carter Wong at his best!

Ah, Tony Zarindast, the man who gave us Warwilf...Uh, I mean Werewolf. This sounds like fun, I may try and track it down.

Haha! Werewolf was hilarious bad. Would be interested in your opinion!

And Ted Prior's mullet could only have come from the 80s.

Haha, so true! Classic Prior. He should make a comeback film like Hardcase or Deadly Prey.

Well they are making Deadly Prey 2. Did you not see the preview trailer? All the old cast reunited according to David A. Prior! Check out his FB page to learn how you can be an extra killed by Danton for 2 grand!

Force Field: Oh that's right! Totally forgot about that. Thanks for the link. Danton is finally coming back!

Saturday Night Screening: Haha, that is a good idea!...it is pretty odd and semi-dirty title.

Wow! This one looks like it has to be seen to be believed. I mean the cover alone, geez! What's up with the pants up to his chest? lol. And it took me a minute to figure out where I've seen him and it hit me that he was from Big Trouble in Little China! Where his english was just as bad. Now I gotta see it!

Haha! His pants on the cover are hilarious.

It is so bad it's good. Would definitely be interested in your take on it.

Yup, I need to rush out and buy a pair a high-waist jeans like Carter Wong....pronto!

Is that guy on the cover the dude from "Big Trouble In Little China"? the resemblance is uncanny if it isn't him!

It is definitely him! Carter Wong himself! Haha

Possibly the greatest film title in history. That is all.

Haha! That's what we thought too!

Another I have on my watch list, so I just skimmed, but I like seeing that you gave it three stars, and the Carter Wong Ted Prior factor should be fun.

It is definitely silly and ridiculous fun. Carter Wong's pants alone makes worth tracking down. Haha.

Giving credit where it is due, ‘Big Trouble in Little China’ is the masterpiece to finally reveal that Carter Wong is filled with lettuce.

He really "produces" the goods, Ryguy!