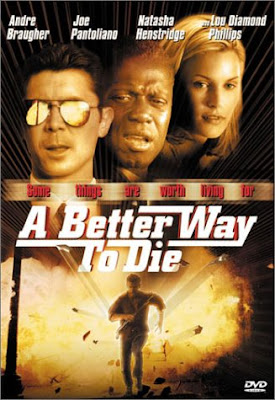 
"Some things are worth living for..."


Boomer (Wiper) is a young Chicago cop that gets mixed up in a war between federal agents, such as Dexter (Phillips), and shady gangsters and criminals, such as Cleveland (Braugher) who want a special computer chip. Apparently this chip contains sensitive information that leads all the way to the top. So Boomer ends up on a road trip of sorts, dodging dangers at every turn, and meeting wacky characters such as Flash (Pantoliano, not Jeff Kutash). All he wants to do is propose to his beautiful girlfriend Kelly (which is probably a decent idea considering it is puzzling why a woman of this caliber is with this dork in the first place)...but, as they say, life has other plans...

It seems, since the 2000’s, the term “Direct to Video” is synonymous with this type of production - a not-quite-movie-theater-quality, run of the mill, post-Tarantino crime thriller that relies more on cursing in the dialogue than on good ideas. This is a shame, DTV used to encompass all sorts of things, not the least of which was punchfighting movies. But, alas, this relatively new form of entertainment has paved the way for such personalities as Scott Wiper, a man whose career would not exist were it not for the miracle of DTV productions. 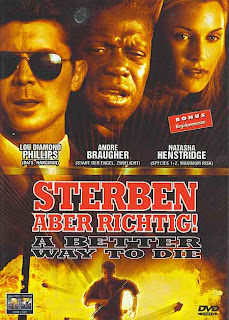 Despite the good cast, don’t be fooled. This is some sort of vanity project for the aforementioned Mr. Wiper. Just because he wrote The Last Marshal (1999), now he feels he’s entitled to write, direct and star in his own project, leaving the real stars in the background. Well, you’re no Scott Glenn, sir. (Note snarky attitude). Lou Diamond Phillips and Wiper should have switched roles. But we’re left with the unlikable (or unWipable) Wiper, who appears to be some sort of irritating cross between Edward Burns and Ben Affleck.

At the outset, it appears we’re in for a low-budget, gritty crime drama that’s at least striving for some measure of quality. Sadly, the “irony” sets in and we realize we’re in sub-Boondock Saints (1999) territory once again. Of course, why that movie has a gigantic following and was even re-released back into the theaters (an unheard-of move) while A Better Way to Die and its ilk are unnoticed by these same “fanatics” is unknown. 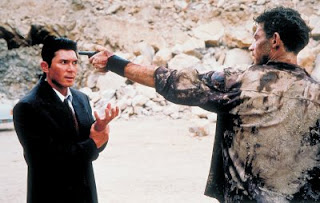 This movie is not impressive, although the (unfortunately) supporting cast tries their best. Henstridge has never looked better, but that’s not nearly enough to save this dud. Regrettably, a Better Way to Die is a waste of the talents of LDP, Braugher, Pantoliano, Henstridge and Sweet Lou (B’Nard Lewis). Avoid.

Comeuppance Review by: Brett and Ty
Posted by Ty at 1.2.12

I strongly disagree with you on this one, I acutally liked it even better then Last Marshall I actually thought Wiper did a pretty decent job acting wise, though I agree that it would've been better for someone else to play the lead, plus the action scenes were pretty good.

We always appreciate a different opinion!

Will agree with you about some of the action scenes. If the movie didn't rely on lame Tarantino-esque dialogue the whole time, the movie would have been way better.

It also could have used some more LDP!

I didn't really notice the dialogue in this film at all, and to be quite honest, I think Tarantino is just a tiny bit overrated, and I can honestly say i'd watch this over some of his films(Jackie Brown and Inglorious Basterds didn't really do much for me, and I jsut know people are going to call me crazy for saying that) I have a bit of an affinity for Tarantino rip-offs actually, I find most of them pretty fun, "Thugs" "Boogie Boy" and "Truth Or Consequences N.M." were all pretty enjoyable, i'd recommend you give those a look.

Definitely enjoyed Truth Or Consequences, but haven't seen Thugs Or Boogie Boy. Will have to check those out.

Jackie Brown was pretty decent. Inglorious Basterds had some excellent moments, but i agree, it is a little overrated.

I skimmed this one because I had it on my watch list, though based on the star number you gave, I'll bump it further down. Thanks for the warning.

No problem. Definitely interested in your take on it. This could have been so much better...LDP was completely wasted.

Aww man, I saw this film twice on Hulu. Very unrecognizable acting by most of the cast and while I can see why some might find it to be a partial Tarantino clone and it has the usual cliches found in crime shoot-em'-ups, I just found it engaging.

I don't really see how LDP was wasted considering he was kept mysterious as evidenced by his limited screen time and he was just used for the DVD cover art marketing style. Wiper i thought did alright with Condemned although that's not really notable and while I heard mixed to negative things about his film Cold Light of Day, I do hear that The Marine 3 is a fun Die Hard type vehicle. I forgot he was the lead star in this though.

Can't agree on this one. We thought this was tough sit. If it just stopped trying to be cool every second, and tried to be good, this could've been a winner. LDP was solid though.