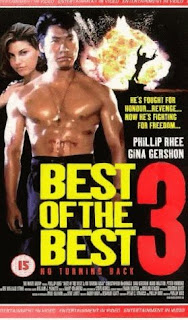 There’s some bad stuff goin’ down in the small town of Liberty (either Indiana or Ohio, we’re not entirely sure, but it’s a rural burg and that’s all the viewers need to know, apparently). White supremacists are taking over the formerly-peaceful town, led by the hate-filled preacher Brian (an uncredited Ermey). Just as their evil empire is growing, none other than Tommy Lee (the drummer from Motley Crue) (just kidding, it’s Phillip Rhee of course) rolls into town to visit his sister who just happens to live in this town, and her husband Jack (McDonald). Jack also happens to be the sheriff, but is powerless to stop the hate-filled mobs. Lee finds he must use his fists and his feet not only to defeat the stupid racists, but to defend choir director Margo (Gershon). Will Tommy Lee beat the neo-Nazis and ride off into the sunset?

To Best of the Best 3’s credit, it has an extremely professional look, with very good production values.  This was Phillip Rhee’s first directorial effort, and it seems like he had been building up to this for a while, because he does a very competent job, with a lot of interesting shots and as mentioned, the technical aspects are very good.  Plus, with its themes about racism, it was at least trying not to be the same old dumb meathead movie. It made an effort to make you think, which is more than you can say about some of this movie’s competitors (or other entries in the series, for that matter). 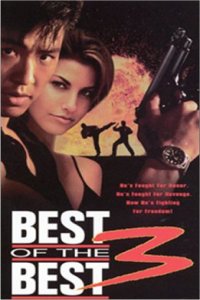 Like China O’Brien (1990), the “rural action movie” angle is used, and, like Substitute 4 (2001), the “white power” angle is used. Interestingly enough, the director of Substitute 4 is Robert Radler, the director of Best of the Best 2 (1993). There’s even some Jackie Chan-like martial arts, as evidenced by the scene in which Rhee fights some baddies in a clown outfit. You truly haven’t lived until you’ve seen thugs get kicked by a man with giant shoes.

As we’ve seen in everything from American Ninja (1985) to terrorist training videos, the army of bad guys have their own training camp, complete with, you guessed it, monkey bars. Exactly how these monkey bars would help someone defeat Tommy Lee in a fight is not known. And the head Nazi guy wouldn’t even come close to challenging Lee in a fight. He only holds his own for a long time because that’s what a lot of final bad guys do. A lot of action movies fall into that cliche: Although the main baddie may have no martial arts or combat training whatsoever, when the hero faces off against him in a fight, after handily defeating hundreds of goons, NOW the final fight is actually a challenge for the hero. It’s just silly, but you can’t really help it. 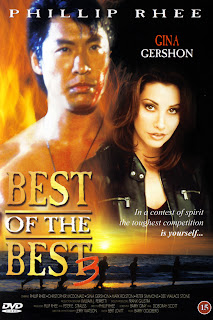 If you have Netflix streaming, you should view Best of the Best 3 that way, as the quality is excellent and it’s in widescreen. The movie has never looked better.

So grab a Like soda and cheer for Phillip Rhee, Christopher McDonald and Gina Gershon in a truly hard hitting tale of racism.

What's the theme song for this one like? Stubblefield and Hall's effort on the first one is an outstanding piece of inspiring rock.

They decided to strike a different note on 2 with Mark Free's power ballad: love the wailing guitar fade out at the end.

Did they save anything special for part 3?

Yeah, this is pretty good fun. It's the first one of the series I watched. Rhee's got a decent leading man charisma.

Think I need to get a full review of this series up.

Exploding Helicopter: Unfortunately, there is no rockin' theme song like in the 1st two...that was a flaw.

Jack Thursby: Totally agree! Looking forward to your opinion on the whole series. Rhee should have made more action movies.

I'm going to a grab a soda & watch this movie! Because I have Netflix again and I'm ready to be entertained!

Cool! It is silly martial arts fun!...but with some surprisingly serious moments of drama. Especially the beginning.

are you doing the 4th one? i've been meaning to watch that one for its die-hard-ish-ness

Definitely reviewing the 4th one. It drops tomorrow!

I enjoyed this one too. Rhee directed a solid action flick with plenty of high octane scenes, the kind of thing we're always looking for in action flicks. And I agree about the monkey bars. It must have something to do with developing endurance and upper body strength.

Totally agree. This was a solid flick...Rhee brought his action A-Game!