Jack Caine (Lundgren) is a Houston cop on the edge. When his partner is killed by sinister drug lord Victor Manning (Howard), Caine wants revenge. But his new partner is by-the-book, straitlaced Special Agent Smith (Benben). As you might expect, the unkempt, roguish Caine doesn’t get along at first with the fastidious Smith, but they forge an uneasy alliance. Mainly because, in addition to the drug war they’re fighting with shady underworld types, an evil alien (Hues) with super-strength is ravaging the city. He’s murdering earthlings because human endorphins are needed to make a valuable drug on the planet he comes from. A “good alien” is chasing him down as well. On top of all this, Caine is trying to repair his relationship with ex-girlfriend/coroner Diane (Brantley).

I Come in Peace is a very entertaining movie, mainly because the plot actually contains some very interesting ideas. It’s all done with a lot of good energy, and like director Baxley’s other films Action Jackson (1988) and Stone Cold (1991), it is well-written, containing some memorable lines. 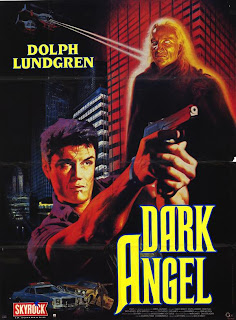 It was also a rare chance to see Matthias Hues in the movie theater. Hues is a bad guy in just about every movie he’s ever been in, and perhaps the ultimate face-off is Dolph Lundgren and Matthias Hues. This is the only movie they’ve appeared in together to date. It’s certainly a treat to see them together, especially in the final battle (which naturally occurs in an abandoned factory).

Hues later played a similar role in Digital Man (1995), but I Come In Peace is a far superior movie. He only says one line, but he growls a lot. Speaking of action heroes, Brian Benben plays the humorous counterweight to all this, and if this movie was made today, the role would probably be played by Rob Schneider. About the “good alien”, the role could also have been played by Michael Ironside. 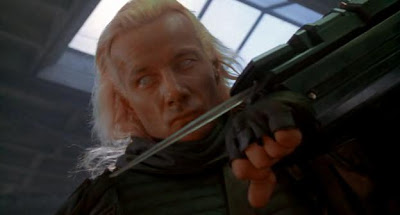 Hues’ weapon of choice are Phantasm-like flying CD’s, and there is other cool, high-tech weaponry as well. The main force of goons in the film are guys in suits inexplicably named “The White Boys”. The name certainly inspires fear on the streets, and it’s a lot of fun watching the other characters in the movie talk about them with a straight face.

There are plenty of impressive stunts, blow-ups and special effects, and it’s all done with style. It also has plenty of great music (the song choices of bands such as XYZ and Shooting Star add a lot), and the excellent Jan Hammer score holds it all together. It’s truly a shame no soundtrack has been released on CD.

For classic early-90’s fun starring two genre heavyweights - with a twist - you can’t top I Come In Peace.

I love this movie! I recently bought it on DVD and it was as good as I remembered it to be!

Awesome! We love it too. One of Dolph's best.

Only got round to watching this a year or so ago. Great little action flick. Watched it with my girlfriend. Ever since, whenever Dolph Lundgren comes on TV, she always turns to me says "...You go in pieces, a$$hole". I'm marrying her next year. 'Nuff said.

I agree, this is a fantastic film. Can't wait for the DVD I ordered to arrive.

I remembered the adverts for this on TV and tracked it down a couple of years ago. An awesomely dated introduction to Hues and Lundgren!

Never did understand why this was retitled Dark Angel over here, anyway a real old favourite this one, I really loved the weaponry, especially the cds.

Jack: I Come In Peace has bonded many relationships over the years! You are a lucky man!

Ed: Very cool! Something to look forward to putting into your collection.

The Goodkind: Perfect introduction to the real clash of the titans!

A Hero Never Dies: We agree, the retitling doesn't make much sense but the cds were wicked awesome! Hues only threw Dokken and Shooting Star discs at the baddies because those are his favorite hair metal bands in space!

The Ultimate Dolph, next to Showdown in Little Tokyo. Hues is awesome, Dolph is brilliant. It's titled Dark Angel out here as well. I Come in Peace is far more hilarious.

I loved this one. Whatever happened to Brian (Dream On) Benben?

Explosive Action: We can't agree more! One of Dolph and Hue's absolute best.

Ricky: Good question! He should have been in more movies like this.

I knew it! You were saving the best for last!
One of my favorite all time flicks, ever! I own almost every form of this awesome film on VHS, Laserdisc and DVD. I love it. Great review guys!

Check this out. The other day I heard the lines "I come in peace." "And you go in pieces" on a freaking toilet paper commercial. lol. Can you believe it? I had to rewind it to make sure I heard it right and yup, on a Charmin' Toilet Paper commercial (animated with the bears) they used 2 lines from I Come in Peace. That's just not right.

Thanks! That is super cool that you own this movie on every format! Also that is hilarious they quoted this movie on a Charmin' commercial. Haha.

Our last movie for Dolph Month drops Wednesday: The Punisher.

I shall never refer to this as Dark Angel ever ever ever. I'm not sure why they mucked with it. It cheapens the payoff line Dolph gives the alien in the end! Can't wait for punisher!

Totally agree. Never understood the title change! Like you said it ruins the one-liner at the end.

I don't know that it gets much better than I Come in Peace, just a great time all around. And I love that video store poster you included. It just kind of brings the whole nostalgia factor of this move into play.

Can't agree more. This was the perfect video store pick-up back in the day.

Absolute blast of a movie!

Definitely! One of Dolph's best.

This is one of the most underrated action movies of all time. Lundgren and Hues are awesome battling each other. I'm happy to see you mentioning the music. Both the songs and Jan Hammer's score are great.

Totally agree! Thank you for noticing the fact that we noticed the music. One of the stand-out tracks is Maggy by XYZ...includes back-up vocals by Don Dokken. It's the music that helps propel the movie to the top...that and Brian Benben. Haha.