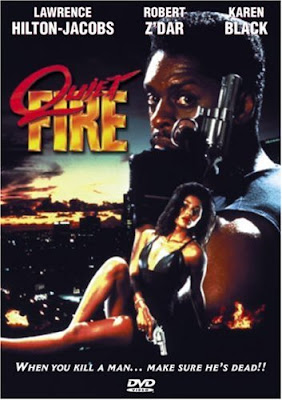 
Lawrence Hilton-Jacobs, heretofore known as "Washington" on the TV show Welcome Back Kotter, at some point in the late eighties/early nineties hooked up with PM Entertainment to reinvent himself as an action guy. His stamp is all over Quietfire at least, with all sorts of nebulous credits - everything from "additional dialogue" to "additional music". He also stars in the film as the Vietnam vet Jesse Palmer.

All Jesse wants to do is live his life in peace and work at Gold's Gym protecting women working out from come-ons by mulleted meatheads - and represent Gold's Gym on his clothing at all times. Not to mention showing off to the local strippers his ability in killing bugs for them. But trouble arrives in the form of J. William Whelan (Lindsay), an evil, corrupt man running for U.S. Senate. How topical. He has everyone living in fear of him, and even has two cops on the take, Russo (Z'Dar) and Overstreet (Jastereo Coviare, who also did the end credits song).  It seems Whelan is involved in various arms deals with enemy nations. When Jesse's 'Nam buddy Walt is killed, Jesse connects the dots right to the nefarious Whelan. Add to that Whelan was Jesse's Commanding Officer back in the old days. And since Jesse was on a team of elite ops that never failed in their missions, Whelan knows what Jesse is capable of. So now Jesse and his girlfriend Jana (Nadia Marie) are on the run, and Jesse has to elude and/or fight wave after wave of bad guys.

Apparently this incriminating information about Whelan is on a computer disk which Jesse must find and protect. But along his travels of running from the baddies, he meets a lot of colorful characters, such as Walt's friend Kim (Black). She's a hippie that runs one of those hippie stores. Why this minor role needed to be filled by an actress of Karen Black's caliber remains unknown. So as Jesse says, it's like he's "back in 'Nam all over again!" Will he be able to fight all of his assailants and get justice?

Quietfire is nothing but silly - very silly - fun. You can't take it seriously at all. From the first seconds of the film (or video?) it looks like that old commercial for the Viper car alarm system. LHJ (as he, and his production company are known) lives in a purple apartment and when bad guys invade it, he must unleash the awesome power of LHJ-Fu on them. The movie is like a 90 minute commercial for Gold's Gym. There are numerous scenes in the interior and exterior of said gym, and LHJ wears their gear for 95% of the film, except at the end when he changes into his all-black "I'm gonna really get revenge" outfit. That's also when he finally breaks into his secret stash of throwing stars. But what LHJ really brings to the table are his bulging eyes, which do most of the acting. But them together with Z'Dar's famous chin (here mostly hidden by a beard), we have some seriously exaggerated body parts on display.

A news program interrupts something playing on the radio to announce that Whelan's opponent has called him "a wimp". Definitely newsworthy. But in true PM fashion, we get, for no reason really, to see "action Senator (-ial candidate)" when Whelan gets to try out one of the missile launchers himself. And getting back to the phalanx of incidental characters, besides Karen Black's, we also have the beyond-sassy motel manager, as well as Clyde, Walt's brother, who wants nothing more than to offer LHJ a nice "Sparkling Fruitwater", Whelan's assistant who looks exactly like Harry Potter, and lest we forget the legendary Todd McMasters, a bespectacled little nerd who gets mercilessly mocked, behind his back, of course, by everyone throughout the rest of the movie!

We would also be remiss if we forgot to mention Hector and Jax - two transvestite and/or transsexual assassins hired by Whelan to finally off Jesse. In this truly weird and unexplained turn of events, it recalls the grand tradition of "great last minute characters" we've seen added to the last act of movies in the past...Bear, The Cowboy, The Dead Man, Machine Gun Joe, etc. They really add a lot.

Sure, the title makes no sense whatsoever (why is it all one word?), the tagline is really stupid ("When you kill a man...make sure he's dead!!), and certain aspects, especially some of the acting of course, are amateurish, but so what? Quietfire is a ton of fun. It's a hilarious movie, so crack open a few beers, make some snacks and let Lawrence Hilton-Jacobs entertain YOU!

Quietfire has always held a special place in my heart for a few reasons, foremost among them that it's the only film out of the 500 plus I've reviewed at the DTVC that starts with the letter "Q". I was surprised that this film got zero reaction when I reviewed it, because I was expecting theer to be a bit of support for LHJ and Z'Dar-- I mean, I always loved LHJ's PM Entertainment oeuvre for the sheer silliness factor, and Z'Dar is Z'Dar. I'm glad you're giving it a second life here.

Thanks for the nice comment about Quietfire. It really was great! LHJ was brilliant in his role! and I hope to see L.A. Vice, L.A. Heat and Chance Soon!

What a fantastic cover. All 80s action movies need classy covers like this. I look forward to getting a copy of this one, thanks for the review Ty.

Your Welcome Sutekh! It is a really silly movie, that i know you will enjoy!