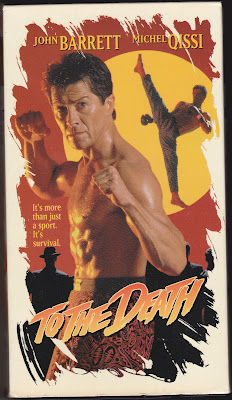 
In this REAL sequel to American Kickboxer 1 (1990), “Quinn” (Barrett) retires from Punchfighting and lives a peaceful life with his beloved wife Carol (Udy). “Denard” (Qissi) is seemingly obsessed with taking on Quinn in one last match (don’t worry, we’re going to explain why the names are in quotes later in the review). Quinn refuses to fight, which upsets maniacal millionaire Dominique Le Braque (Whitehead), who stages fights.  It angers him so much, he kills Quinn’s wife. Now distraught, Quinn hits the skids, living in a seedy motel and drinking himself to death. Preying on Quinn’s new vulnerability, Dominique invites Quinn to live at his palatial estate and train to get back into shape so he can fight and win a lot of money. Quinn agrees, not knowing they are Punchfighting matches...wait for it...TO THE DEATH! (In a slight twist on that tale, you don’t actually FIGHT to the death, if you lose the match, an evil ref just comes in and shoots you in the face.)

After a some plot padding, Quinn develops a relationship with Dominique’s wife Angelica (Bestbier), and the sinister Dominique doesn’t take very kindly to that. Will Quinn ever escape his clutches?  Or will Quinn don his craziest Punchfighting Pants and fight his way out?

About the names being in quotes above, confusingly, even though there were characters BJ Quinn and Jacques Denard in American Kickboxer 1, Here, for some unknown reason, Barrett here is Rick Quinn and Qissi (a different actor) is some other Denard. Why this happened, we don’t know. Maybe Cannon demanded it. 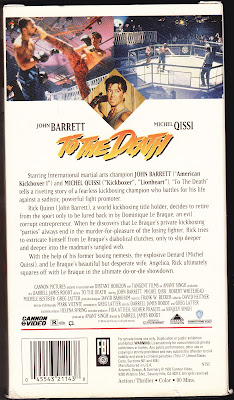 We like John Barrett, but this movie never really rises above decent. Whitehead as the over-the-top baddie is like some kind of cross between Raul Julia and Tim Curry. He chews the scenery well. Rather than give a thumbs up or thumbs down as to whether the fighter will live, he delicately throws a rose. Now we know where the producers of The Bachelor get their ideas.

Le Braque even dresses in a Clockwork Orange-style getup. In another absurd device, the ring announcer is none other than a man in harlequin makeup reminiscent of The Joker (he even tells really bad jokes and tries to outdo Whitehead in the crazy sweepstakes). He’s truly one of the original Insane Clown Posse.

Willard the reporter who looks like Owen C. Wilson is back (Le Plat), but presumably it’s some OTHER Willard. Quinn trains for his Punchfighting matches in dress pants, but really, if you look objectively, the Punchfighting in this movie is not that great. Additionally, the plot suffers from all sorts of maladies, but mainly  pacing issues, and the script should have gone through a few more drafts - there’s a good movie in here somewhere but it’s buried in a few layers of crud.

One of the better aspects of this movie, as we’ve seen so many times before, is the title song. The rap by Edward Jordan is a lot of fun. But really, the main flaw here is that the original Jacques Denard did not return. He really brought a lot to the table in the first film.

If you’re just itching to see the continuation of the saga of Quinn, Denard and Willard, by all means, seek this movie out - but as an example of an entirely cohesive film or an example of a great Punchfighter....this sadly isn’t really it.

Also check out our buddy Direct To Video Connoisseur's review!

Darrel Roodt has certainly had an interesting directing career, he went from this C-grade film and Patrick Swaze film Fatherhood to the award-winning drama "Cry The Beloved Country", then he did that Ice Cube/Elizabeth Hurley film Dangerous Ground(which I enjoyed far more then the critics did) then he did Witness To A Kill and alternates between doing dramas and horror films like Cryptid and Prey.

As for this film, it was OK, but both American Kickboxer films were more entertaining for me.

Left it late in my life, but I'm kind of getting into these 'punch fighting' as I think you call them. Sounds like I should prioritise American Kickboxer over this.

Venom: Totally agree. His career is very interesting. Really enjoyed Witness To A Kill. Dangerous Ground wasn't too bad either.

To The Death is just Ok though. Could have been way better.

First off, thank you for the link, I appreciate it. I just re-read my review (and found some typos!), and I think I enjoyed this one a little more than you, but I can't argue with your critiques. I think if the same movie was made in 2012, I'd probably kill it for all the things this had wrong with it.

No problem about the link! Excellent point. If this was made in 2012, this would even worse.

John Barrett should make a return to action flicks!

This is a bit disappointing to read, as I had high hopes for this one. I still intend to cover it at some point, but it's definitely going to fall down the queue.

I think John Barrett is underrated both as an on-screen fighter as well as an actor. He has a weathered and world-weary quality to him (mostly from age) and has decent dramatic chops when compared to his peers. As evidenced by AKB1, he can carry a film when surrounded by the right piece.

On that note, Qissi, as notable an action baddie as he is, can be nothing but a step down from the original Denard. Brad Morris was absolutely fantastic in that role: dickish, arrogant, and incredible clothes. Too bad he didn't do more.

Totally agree with your comment. Barrett is underrated as an action star. He should have done more. Maybe teamed up with Richard Norton.

Brad Morris was great as Denard. He stole American Kickboxer 1!

It never ceases to amaze me just how many movies you review that I've never eve been aware of. Love this blog.

Thanks! We really appreciate that. We do our best to find the oddities on the video market. Haha.