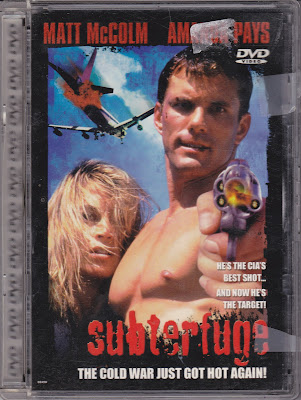 
Jonathan Slade (McColm) is a retired Military hero whose current profession is listed as “Beach Bum”. His brother Alfie (Gould) is your classic computer nerd who uses his skills to become a petty criminal. When a plane carrying something valuable (no spoiler alerts here) crashes into the Black Sea, the CIA, and Stallworth Hubbs (Turman) in particular says “Get me Slade!”

So the Slade brothers go to a resort town in Russia to fight the baddies and get the black box of the airplane to try and find some answers. While there, they team up with Alex (Pays), and a series of fights, car chases, underwater scenes, boat chases, and complete silliness ensues. 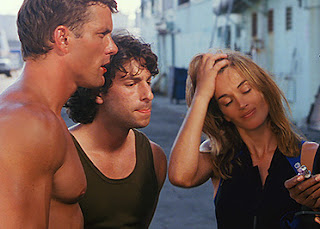 Subterfuge is a lot of bright, upbeat fun and truly is a rollicking adventure. You know when you see the barfight introducing Slade, which is the wackiest we’ve seen since Radical Jack (2000), that you’re in for a funny good time. Matt McColm is a far better central hero than, say, Frank Zagarino, and his meatheadiness contrasts well with his brother in classic “odd couple” fashion. Jason Gould, the son of Barbra Streisand and Elliott Gould, steals the movie with his quasi-annoying yet somehow likable performance. He resembles Bill Schulz from TV's Red Eye. His scientific ideas sure do come in handy, especially in a scene involving a whale which may be a first in an action movie (or any movie). Amanda Pays does well as the action heroine/love interest for McColm, and Richard Brake as “Pierce Tencil” really throws himself into his role. Director Herb Freed is probably best known for the 80’s slasher Graduation Day (1981), but is also responsible for the Mike Norris vehicle Survival Game (1987). 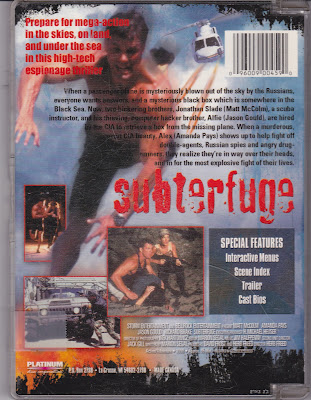 The movie is filled with funny incidental characters as well, everyone from the standard “wacky taxi driver” to the nightclub singer. Thanks to the humor, as well as some “memorable” editing, Subterfuge is an enjoyable romp. Plus it has great “90’s tech” such as CD-ROM-style computers that beep and make “thwacking” sounds when you use them, as well as 90’s fashion choices like hiked up jeans with a T-shirt tucked in. McColm’s signature fighting move seems to be to fall on his opponent from a high distance up while yelling.

Sure, it may have a low budget (just check out the opening plane sequence with its Star Trek-style camera shaking to indicate turbulence, as well as the plentiful stock footage, the fact that it was released by Platinum Disc, etc., etc, ), but Subterfuge is, against all odds, a winner. For hilariously implausible fun, check out Subterfuge.

Oh yeah I was hunting this down only the other week, it looks great. Tough one to locate! Good to see it's three-stars worthy.

It is silly fun! Could have been more gritty, but it was surprisingly not that bad.

If you find it, we are definitely looking forward to your opinion. We stumbled upon on it last year by accident.

The first comment was correct. The film is not easy to locate. Perhaps at a yard sale ...

Haha, so true. We found in a West Haven, CT video shop...hidden with some comedy DVDs.

Actually this film can be found pretty cheap on Amazon: http://www.amazon.com/Subterfuge-Matt-McColm/dp/B00001U0G6

Nice review. This was a fun flick. Ridiculous as all get up but a lot of silly action fun...

Venom: Thanks for linking the amazon page!

If you guys loved McColm's work, check out the equally cheesy ACTS OF BETRAYAL. It has everything: an annoying sexy b!tch who McColm must protect as a federal marshal, Joe Estevez as a sheriff, an unusual crime ring, a few lame one-liners, explosions and more.

Haha! That sounds great. Will keep an eye out for that one. Got to love Joe Estevez.