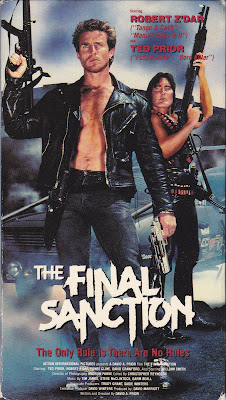 
“The sanity of our nation’s leaders is certainly in question."

Thousands of people have died after nuclear missiles have launched in the ongoing war between the U.S. and Russia. Rather than risk any more human life, both sides agree to send one of their best soldiers to fight the other in a mano-a-mano duel to the death. Representing America is Sgt. Tom Batanic (Prior), a dude with a bad attitude. Despite his insubordinate ways, the Army chooses him because...you guessed it...he’s “The Best”. Representing Russia is Sgt. Sergei Schvackov (Z’Dar), a SuperSoldier of sorts. Having trained to be an emotionless killing machine by his trainer Maj. Galashkin (Smith), his higher-ups assume he can withstand any challenge. But he has yet to face the wisecracking Tom Batanic, the best the U.S. has to offer.

Also on Batanic’s side is the fact that the Army has installed a device in his brain that can allow him to automatically communicate with Lt. Tavlin (Cline), who is helping him out via computer. If he talks out loud, she can hear him, and she can tell him things directly into his skull. Naturally, at first they don’t get along, but Tavlin begins to fall for Batanic’s unshaven, jaded, one-linery charm. Set loose in a forest to chase and kill each other, who will be victorious?

We have to quote a section of the description on the back of the box: “Armed with every high tech killing device in existence, the renegade American (Ted Prior) and the committed communist (Robert Z’Dar) wage a war to determine the fate of mankind. Democratic Freedom or Communist Slavery...the answer will be written in blood by the last man alive.” 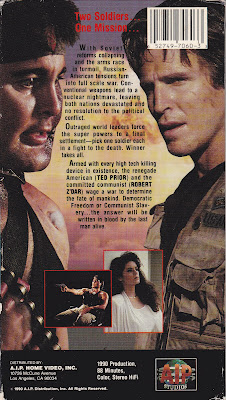 Wow. Sounds awesome, right? While it can’t possibly live up to those overblown claims (every device IN EXISTENCE?), The Final Sanction is really not that bad. Especially considering it’s basically Prior and Z’Dar playing hide and go seek in a forest for 80 minutes. It’s amazing the mileage that David A. Prior gets out of this simple concept. And considering his filmmaking abilities had improved considerably by this point, he should be applauded.

The movie starts with some bomb-blast stock footage, and they spell “Leavenworth” incorrectly, so it gets off to something of a rocky start. But the silliness comes in quickly thereafter to soothe us all, when a delegation of “world leaders” vote on what is presumably nuclear annihilation of the planet by putting scraps of paper with their vote in a grandma-style pewter candy dish! We then move to William Smith doing all sorts of psych and stress tests on Robert Z’Dar, who makes a lot of funny faces. We always have trouble understanding Smith anyway, what with his low, gravelly voice, but add to that a pseudo-Russian accent, and he’s completely unintelligible. It’s almost as if Prior told him, “eh, do what you think sounds Russian”. So he does this kind of gobbledygook that is pretty funny.

As for Ted Prior, he looks a lot like Don Johnson here, and his attitude is pretty Bruce Willis-y in this sort of “Die Hard in a forest” scenario. Tavlin is helping him on a classic old computer screen and it looks like she’s playing Battleship. But with Batanic’s Ozzy Osbourne patch on his uniform, he represents the ramshackle spirit of the U.S. vs. the tightly-controlled training of the USSR.

Try to imagine Deadly Prey (1987) but with no goons, just one enemy for Prior to fight. And the fact that Z’Dar attacks Prior with a series of gardening spades. This could have been one of the many “paintball gone wrong” movies that were surprisingly popular around this time, but they decided on actual weaponry. Nothing much actually HAPPENS in this movie, but it has something of a message at the end, and at 80 minutes (not 88 as the box claims), it never gets boring. It’s all pretty stupid (but you knew it would be going in, so it’s no real surprise) but it’s not BAD. Plus Prior and AIP deliver yet another catchy Steve McClintock song, “The View From Here” for the closing credits.

It should also be noted that the movie’s tagline, “The Only Rule Is There Are No Rules”, is a quote originally stated by Wayne Newton in Best of the Best 2 (1993). How dare they steal from The Newt.

For a simple, undemanding tale where titans clash one-on-one, The Final Sanction fits the bill.

Not reading this review. Prior family plus Robert Z'Dar equals insant win. Don't care how terrible it probably is, I have to see this.

Haha, Looking forward to your take on it. Z'Dar rules!

Has Robert Z'Dar ever played a nice guy? I guess with his looks he perfect for these bad guy roles. I seem to remember him in Tango & Cash

Markus Welby: Hmm, not sure. It would be cool to see him as the hero. I think he was a bad guy in Tango and Cash...don't remember much from that film...except some slight disappointment from it. Haha...Russel And Sly should team up again though.