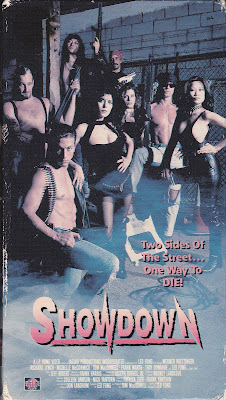 Kincade (Hoetzinger) is the leader of an evil biker gang that’s involved in everything from drugs to burglary to murder. After stealing some money from a racetrack, the gang finds a little town in rural Nevada with a population of 500 people named Sanctuary. Once there, they start terrorizing the townsfolk and causing all kinds of mayhem.

The Commander (Lynch) needs help ridding his town of these people, so he calls in a Martial Arts instructor named James Long (Fong). They team up with Mickey (McCormick), a young girl whose father was murdered by the gang. But Sanctuary is named “Sanctuary” because it is filled with old retired gangsters, mobsters and criminals, and for some reason, federal, state and local laws do not apply there. So it’s going to be an uphill battle, but who will come out victorious at the end of the SHOWDOWN?

Leo Fong is someone we keep coming back to. Most people don’t know the meaning of the word “wooden” until they see one of his performances. But there’s something compelling about him you just can’t deny. Showdown seems to be his baby, as he stars in, produced, wrote and directed it. So it has that Fong-y feel you would expect. Yet he doesn’t seem all that excited to be there. But then again, he was 65 years old at the time of shooting, so maybe he was thinking about other things. Naturally it was released by AIP, this stuff is right up their alley. Luckily, this movie is funny for a variety of different reasons, not the least of which are its amateurish feel and non-actors - not to mention some hilariously choppy editing. It starts with a fist-pumping hair-metal anthem as Hoetzinger rides in on his Harley. Despite getting top billing, with his name alone in a huge credit, this is his only film role to date. It’s a shame, he could have been a classic meathead actor of the day. Richard Lynch is on hand as “The Commander” - not to be confused with Chuck Connors as “The Colonel”. Lynch is more a sheriff than a commander, but it’s always nice to see him, especially in a good-guy role. Troy Donahue is here as “Police Captain”. You can see Fong put a lot of effort into naming his characters. It’s really just a cameo, he doesn’t have a real presence in Showdown. 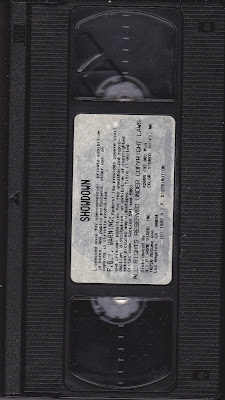 There are some great styles on display, notably Fong’s Member’s Only jacket, and the bikers have plenty of stonewashed denim, as well as mustaches and crazy long hair to keep you interested.  A picture of them would have made a perfectly fine cover for the VHS, but for AIP, apparently, that would have been too sane and made too much sense, so they got some models who are not in the movie to appear on the cover. Why these people are better than the ones actually in the movie, we don’t know. So be aware that this picture is unrelated to the proceedings.

Even though this was released in 1993, there’s still plenty of classic hair metal on the soundtrack from such bands as Riot House and DV8 (we don’t know them either). But another standout song is something called “Feast or Fantom” by Adrena. When is the soundtrack to Showdown going to be released?

If you can’t get enough Leo Fong or AIP silliness, you can't go wrong with Showdown.

Great review Ty, I remember that cover...completely random. Am now humming 'You've lost that Fong-y feelng' to myself.

Thanks! Haha, Gotta to love Fong! He is a living legend.

This sounds awesome! Anyways just got back from seeing Lockout, as far as Die-Hard rip-offs go, this one was pretty fun, it was somewhat remniscent of Fortress 2 and Escape From L.A.. Guy Pearce was PERFECT as Snow, he definitely has what it takes to be an action, his nonstop barrage of one-liners had everyone in the theater laughing(myself included) he and Maggie Grace had great chemistry, and Peter Stormare was great as always as the villain, his crazy brother(forgot his name) was like an Irish(or was it Scottish) Hannibal Lecter, though I was laughing everytime he spoke as I could barely understand a goddamn word he was saying. The action was pretty well-done, there weren't too many jump cuts like in the Bourne films(though the motorcycle chase was a little dizzyinng) though I was dissapointed that Snow didn't get a final showdown with the bad guys, and the briefcase subplot felt tacked on and didn't really add anything to the film. Other then that I don't have any complaints.

Thanks for the your take on Lockout! Appreciate it. Will have to check it out soon.

Also like that there are limited quick cuts...Guy Pearce is always entertaining.

Showdown is wicked silly but definitely worth watching for Fong.

I've been tagged with the '7x7 Link Award' meme-thingy-watchamacallit, and in turn I have to bug 7 other people to do it too. And guess what? You're one of the 7 lucky winners! Congrats! ;)

Haha, they are the ultimate dream team!