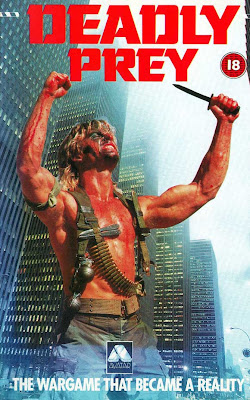 A big thank you to Sutekh from Explosive Action for providing us a copy!

Night Of The Kickfighters (1988). Clash of the Ninjas (1986). American Kickboxer 2 (1993). Deadly Prey. The upper echelon of action movie insanity. If you’ve seen any or all of these movies, there’s no going back. You’re a changed person.

Mike Danton (Prior) is just an average guy, we think at first. He just wants to get five more minutes of sleep in his waterbed and take out the trash in the morning. Without warning, he is kidnapped by a team of mercenaries and driven 75 miles southeast of Los Angeles into the forest, where said Mercs hunt live prey as training exercises. The nefarious Col. Hogan (Campbell) just wants to drink his New York Seltzer and run the operation from behind his desk, but his corporate benefactor, Michaelson (Donahue) is breathing down his neck for results. So with the help of his right hand man, Lt. Thornton (Matthews) and right-hand woman Sybil (Abraham) he focuses all his energy on his former protege Danton, who is killing off his entire squad.

Released into the wild like an animal, with only his wits, his mullet and his undersized white shorts, Danton makes mincemeat of his fellow meatheads. But help is on the way in the form of his concerned wife Jaimy (Tara) and her Father (Mitchell). Jaimy’s Dad is a retired cop with somewhere between 27 and 30 years on the force. He infiltrates Hogan’s training camp to find out what’s going on with Danton. Additionally, his old ‘Nam buddy Jack Cooper (Zipp), a former worker for Hogan, switches sides to the good guys to help out Danton. Will Danton - or you - ever be the same? 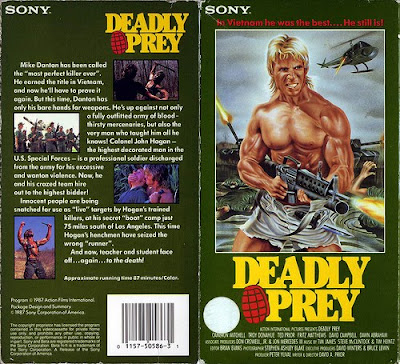 Far from your average AIP jungle slog, this is far, far funnier. And better. There are at least three solid laughs in the first two minutes of the movie alone . The tone is then set for what has to be the best AIP movie. Why can’t they all be like this gem? Almost every line of dialogue (which is mostly in soundbite form) or even the faces the characters make are a “laff” riot. How did they not know it was this funny while they were filming it?

Far from just a “homage” to First Blood (1982) and The Most Dangerous Game (1932), Deadly Prey is an entirely different beast. We’re just sort of thrown in to the plot, seemingly as random as Danton is thrown into the forest. It is a pretty big coincidence that a guy the mercenaries chose at random just happens to be Hogan’s former student and “the best”. But it’s a joy to watch Danton turn the tables on the baddies, and, looking a lot like a caveman and basically in the nude, display his survivalist abilities. At least they must have saved on their wardrobe budget, as, even when he eventually gets the chance to, Danton still steadfastly refuses to wear a shirt. 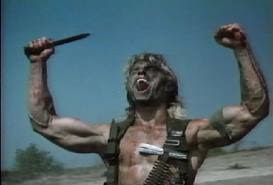 Deadly Prey would make an interesting double feature with Masterblaster (1987). It also features one of Steve McClintock’s best scores, and his sensitive end-credits tune “Never Say Die” musically is antithetical to the violence that we just saw, but that’s all part of the illogical fun. We tried to avoid describing specific scenes because you must see them for yourself.

Silly, ridiculous, hilarious, and full of laughs and action, for an entertaining night of wildly fun viewing, it’s basically impossible to top the modern-day classic Deadly Prey. See it!

Damn, what a manly cover that is!

This movie is a thing of beauty. Thanks also for the shopping list of other movies in your opening paragraph!

It really is. Also your welcome. We are happy to give the suggestions!

This is the best movie ever! And you just got to love the tag line: In Vietnam he was the best... he still is!

Here´s my five cents about it. Hope you all enjoy.

It really is the best movie ever! i love the part when Col. Hogan yells DANTON!!!!

Totally fantastic, I couldn't have said it better, and love the New York Seltzer Water plug. I had to go back and search for that scene just so I could cap the image when I reviewed it-- it took me like 15 minutes! Great stuff.

Thanks DTVC! New York Seltzer Water was super popular back then! haha.

Originally caught wind of this film on an episode of the GGtMC and I just got my copy last week. Can't wait to watch it in all its muscular tiny-shorts glory!

Wish it was more in my wheelhouse and had a martial-arts bend, but this will thankfully give me something to watch without having to actively take notes.

Deadly Prey is absolutely hilarious. It would have been even more awesome if Prior did martial arts. Looking forward to your opinion!

Awesome! Will do. Thanks for the info!

I'm about to post a review of it my blog right now. Awesome stuff.

Totally agree. What an awesome and hilarious movie! Enjoyed reading your review too!

As a huge fan of bad/cheesy movies, I think this one set a new standard. It quickly became one of my favorites, and for good reason!

Can't agree more with your comment. This is tough to beat in the silly-cheesy movie department!

Happy you enjoyed Deadly Prey too!

As the premier action film of all time I thought I'd add these words from Ted Prior regarding the film:

'Deadly Prey... what can I say.. In all honesty it was the first time I felt like Dave and I were making something really cool. I remember sitting in our little smelly apartment in Venice beach California trying to come up with as many ways to kill-off people as possible. When Dave came up with the idea of cutting off Fritz Mathews arm and beating him with it I decided to try to make a prostatic arm. I remember sitting with my arm on a little table and
creating a mold. To both our surprise it actually worked. So the arm I cut off in the movie is really my own. Wish I would have held on that. The biggest thing I learned on DP was NEVER EVER do a movie where your running through the woods all day in your bare fuck'n feet! That was brutal.. It really sounded like a good idea in our apartment sitting around drinking beer but the realty was bullshit! As you know we just shot the sequel to DP
called "The deadliest Prey". We have myself, Dave Campbell and Fritz Mathews back in action! It was amazing to be back together with the old gang. We had a blast! Dave did an outstanding job and Fritz.. what can I say.. he's as menacing as ever! So back to my bare feet! On the first day of the shoot there I am a 52 year old dude standing bare footed in the woods of Alabama. I walked up to my brother and said "Listen mother-fucker, the first guy I
kill I'm taking his fuck'n boots and I'll come up with some shit line that works!" He just laughed at me and yelled "action!"... aint that a bitch!'

Ted Prior is a great man and personal hero. Thanks for providing the quote. We appreciate it.

In case anybody was unaware:

Just watched 'The Deadliest Prey' last night and wondered if you guys had ordered a copy or seen it yet. I'd be interested to read your views. Essentially it's 'Deadly Prey' again, with the same plot, music and structure. But it's a good bloody laugh all the same and a worthy follow up.

Haha! Happy to hear it's a solid follow-up. We haven't seen it yet, will have to buy it soon.

Sad news as David A Prior passed away this weekend due to failing health. This is a sad shock for everyone who knew him and had the pleasure of watching his classic films. A sad day. What a legend. RIP.

That is really sad. His movies were always entertaining. He will be missed a lot. RIP.

This movie was worth every word of hype I ever read about it! Whether viewed alone or in the company of beer-drinking buddies, this movie delivers.

I am anxiously awaiting the arrival of Deadliest Prey. I plan to see it next week. I couldn't care less if it's a direct re-hash of the first one; since you can't top it, you may as well recreate it.

We totally agree. This movie is an all-time classic! Now that it is on Blu-Ray, it's more readily available than ever before. DANTON!

The rudest of all time. Nothing comes close.