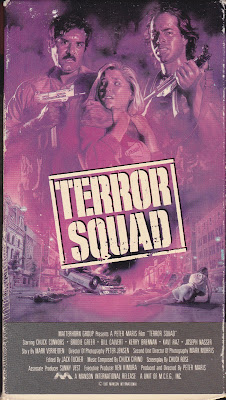 
Terrorists from Libya come to the United States - Kokomo, Indiana, to be precise, because they have an eye on the Blackriver Nuclear Plant. Presumably they want to blow it up in an act of terror. But not on Chief Rawlings’ (Connors) watch. Along with his right-hand man Dep. Brown (Foree), they chase the baddies all over town, until, for a reason that still isn’t entirely clear, they end up at Hoosier High School and break into the detention room.

Staying after school that day is a textbook (no pun intended) array of high school stereotypes: The cool dude, Johnny Dylan (Calvert), the cheerleader, Jennifer (Wall), the jock, the nerd, the “regular girl”, Larissa (Lisa Beth Ross), and the “space case”. Along with the teacher, Mr. Nero (the interestingly-named Budge Threlkeld), of course. What follows is your standard hostage drama as Connors and one of the terrorists battle over negotiations while the audience can’t tell what distance they are from each other. Will the bad guys leave Kokomo alive?

What’s fascinating about collecting VHS tapes from the golden age of the video store are the random remnants of history you’ll find. For example, on the back of the box for Terror Squad (released by Forum Home Video in 1988), is the following headline: “A Terrorist Attack in the United States - They Said it Could Never Happen...They Were Wrong.” In this post-9/11 world, where we all live with the threat of terror on a daily basis, and we’re constantly hearing about foiled (and, sadly, sometimes not foiled) terror attacks, this headline is of particular note. As if that wasn’t enough, the first sentence of the description goes thus: “The threats of Libyan leader Muammar Qaddafi become a bloody reality in this explosive film of terrorist action.” It’s like it was ripped from the headlines! If only old Muammar had seen Terror Squad, his fate might have been different... 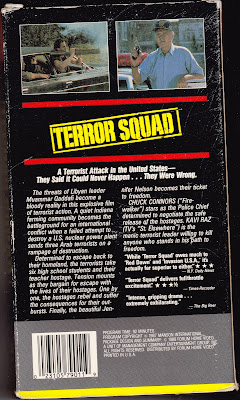 Continuing with the treasure trove that is the back of the VHS box, there’s a quote: “While Terror Squad owes much to Red Dawn (1984) and Invasion U.S.A. (1985)., it’s actually far superior to either”.  This according to the N.Y. Daily News, apparently. Assuming this quote is real and not taken out of context, whoever wrote it is as wrong as a doornail. Yeah, that’s the ticket. What this movie really is, is a cross between The Breakfast Club (1985) and the later Dolph vehicle Detention (2003). And the fact that there’s an extremely long, drawn out car chase in the middle recalls The Big Sweat (1991). The reason the chase is so long is because the movie, with its one-dimensional characters and wafer-thin plot that adds nothing new to the hostage drama genre, can’t fill out its 90 minute running time.

As far as some of the characters go, Johnny and the school janitor, Gus, have jam sessions on guitar in the janitor’s basement (with a crudely painted sign declaring it “Gus’s Headquarters”, as if it’s some kind of cool club). As they both play unlistenable simultaneous solos (which sound like a keyboard, as their finger movements don’t even come close to matching during this cacophony) - there’s actually a crowd of students watching this! And when they’re done, they clap! I know this happens at school all the time, but Johnny Dylan is one rockin’ dude with a bad attitude. As far as the nerd character (not sure of his official name, possibly  “Dinkle”), he’s s not just your classic glasses-wearing, voice-cracking, technology-having dork. He only uses his smarts to see leotard-wearing women work out on various computer screens. Thus making him the time-honored pervert nerd, or, “Perv-Nerd” we’ve all come to expect in 80’s movies.

As if all these stereotypes weren’t enough (did we mention the football player looks like he should be named “Ox”?), at the beginning of the movie, set in Libya, there’s a crowd of America-hating protesters, with signs like “Death to the great Satan”, and “Death to the American Dogs” - they’re standing outside Qaddafi’s palace - and Qaddafi HIMSELF makes an appearance! It’s amazing! 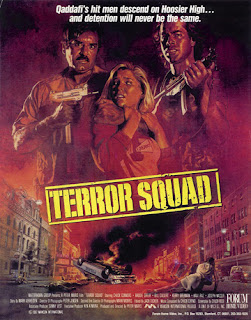 Back in America, it’s always great to see Chuck Connors. We love him. We also love Ken Foree, so that pair as the good guys really works. During the endless chases, shooting, rocket launchers, silly destruction, dumbness, and possibly an exploding helicopter, it’s nice to have these guys anchoring it. There’s even some bizarre humor in some scenes, which doesn’t really work overall in a movie supposedly about Islamic terror. There are even some glaring errors, such as a school bus that in one part of a scene is standard length, then magically becomes a “short bus”. Did they think the audience wouldn’t notice?

While this movie does wear out its welcome after a while (director Peter Maris was just then beginning on his career producing mediocre action movies), Terror Squad isn’t without its moments, and it does provide an interesting glimpse into the past. If you’re willing to forgive all its odd mistakes, it might be worth a one-time watch.

Warpath was Maris's best film IMO but this one, Viper, Land Of Doom, Alien Species, Diplomatic Immunity and Hangfire were pretty enjoyable as well. The one Maris film i've always wanted to see is Curse Of The Red Butterfly, that one was released on VHS in Japan and other countries, so you might want to see if you can track it down.

Will have to track Curse Of The Butterfly down. Looks interesting.

Didn't "Curse of the Red Butterfly" have another title as well, or am I thinking of something else?

According to IMDB, it is also called Bloody Mission.

Chuck Connors is so badass.....actually....who the hell is Chuck Connors? I truly dig his oh so manly name, but has he actually been in anything significant that I might recognize?

Yowza! Won't be wasting my time with this one anytime soon. And what a bold statement indeed: "Superior" to Invasion U.S.A.?! Pft!

I've seen Land of Doom and some other Marris POS, so I'm not surprised to hear that this one is lousy too. Ken Foree what were you thinking!

MarkusWelby1: It is a manly name. He is best known for "The Rifleman" but began doing B-movies in the 70s and never looked back. Summer Camp Nightnmare, The Mad Bomber, and Tourist Trap are Connors stand-outs. We probably won't review them because they are not action-oriented, but they're all well worth watching.

RobotGeek: What a lie! Invasion U.S.A. is impossible to beat. Which is the REAL Chuck of action? Only you can decide. Haha.

The Goodkind: Good question about Foree. He even re-teamed with Maris for the truly awful Hangfire (review coming soon) which makes Terror Squad look like a masterpiece. Brett met Ken at the Chiller Theatre convention in New Jersey. He says he was a nice man.

At the very least it was better then Ministry Of Vengeance, which was pretty boring and uneventful for the most part.

This review from Action Mutant(great site, you guys should really check it out) pretty much echoes my thoughts on the film:
http://theactionmutant.blogspot.com/2009/01/hangfire.html

I think I'm going to rename my blog “Gus’s Headquarters" and see if cool high school gather round and clap it up.

Venom: We thought Hangfire definitely squandered it's cast (we enjoyed Jan-Michael Vincent though) and the plot was pretty weak.

Totally agree with you and Action Mutant about Ministry of Vengeance. Pretty disappointing.

M. Brown: Haha, Good idea!
Also thanks for the kind words. Your reviews are great too!

I remember watching this. It was definitely worth it; one simply cannot resist the combination of Chuck Connors and Muammar Gaddafi! Indiana high school students against international terrorists! Seriously, what more can you ask for? The chase scene was like five hours long, but I still enjoyed it...

It truly is a winning combination!