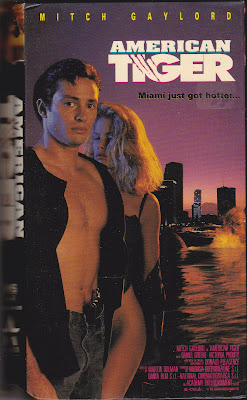 “Seduction: the greatest ally of death.”

Scott Edwards (Gaylord) (No, that’s his name) is just your typical college kid: to make ends meet he is a rickshaw puller in Coconut Grove, Florida. He’s getting his college degree presumably due to the fact that no one even knows Florida has a rickshaw industry. He attracts all the street business because of his snappy Tiger tanktop. Apparently, he was born in the Chinese year of the tiger. Isn’t your tanktop your preferred method of telling the world of your Chinese animal sign? Anyway, this must have attracted elderly Chinese mystic Madame Luna (Kobi), who Scott picks up one day during a rainstorm, so she watches out for Scott using a cat and a cobra that do her bidding. Meanwhile, Scott gets embroiled in a conspiracy and is framed for murder. Professional hitman Francis (Greene) is after him, so Scott goes on the run with prostitute Joanna (Victoria Prouty) and tries to clear his name. But the power and sway of televangelist Reverend Mortom (Pleasance) is going to complicate matters. And that barely covers the supernatural forces at work, apparently brought about by a “stone of evil”. Will Scott pull his way out of this one?

This movie is very, very weird. In a good way, of course. It probably doesn’t get the attention it deserves because of the title and box art. It seems like a standard type of thriller with no surprises, so customers must have left it on video store shelves.  Thanks to some poor marketing by Academy video, that is what it seems like. But like the world inhabited by Scott, Reverend Mortom and Madame Luna, all is not what it seems.  Anyone familiar with Italian horror and giallos will know the name Sergio Martino - the man is amazing. He’s worked in every genre imaginable - post-apocalyptic, Spaghetti Westerns, sexploitation, Poliziotteschi, the list goes on and on. For American Tiger, he brings the off-kilter sensibility he brought to such movies as After The Fall of New York (1983), Suspected Death of a Minor (1975) and Your Vice is a Locked Door and Only I Have the Key (1972), but this time adds the ultimate 80’s coolguy: one Mitch Gaylord. 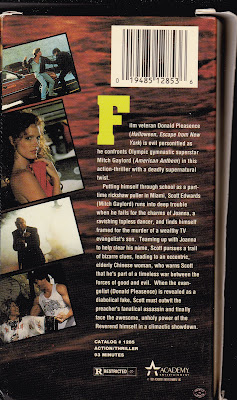 Everything from the opening quote by Confucius to the music (featuring a song where the lyrics appear to be “I’m in a restaurant, whoah-oh”), to the utter strangeness of the ending, nothing ever makes concrete sense in this movie, giving it that addictive Italian feel that American filmmakers cannot achieve. It’s almost like Martino was going from his subconscious, almost like a dream, rather than any kind of written script. Thus, the vibe of this movie is impossible to describe, so we encourage you to see it for yourself. The only people that will not like it are filmgoers that demand everything make absolute sense all the time. But doesn’t that get boring after awhile? Movies like American Tiger give us a break from the ordinary and thus have memorable moments we can talk about. So we applaud that, even if it is confusing to our logical minds.

Daniel Greene, whose best role is in Hands of Steel (1986) but also appears in Skeleton Coast (1988) and The Maddening (1996), throws himself into his role and seems to be having a good time. We always love seeing Donald Pleasance, and while wags might accuse him of slumming here, we thought his presence added a lot, and besides, he’s been in much worse. Even Sherrie Rose appears briefly as well. But the man of the hour is clearly Gaylord, and if any gymnast is going to make a movie career, only he and Kurt Thomas should be able to do so. Can anyone explain why they were never in a movie together?

Oh man... don't know if it's the same in the States but the leading guy's surname is a very popular school yard insult.

Anyway, moving on, I have heard the guy's name before. He doubled for Chris O'Donnell's Robin in Batman Forever.

I sort of want to see it for two reasons. 1) That "restaurant" song sound AMAZING. 2) I enjoyed Sergio Martino 2019 After the Fall and Hands of Steel.

Also, what was with every action film from the early 90s sticking the word "American" in the front.

Man Gaylord has to be one of the most humilating last names ever, high school must've been rough for Mitch with a name like that, anyways this film sounds pretty fun, though for a second I confused it with "American Tigers"(the one where Cynthia Rothrock has a cameo)

Jack: That is definitely an insult in the US. The song is hilarious. We think you will definitely enjoy this.

Venom: That must have been tough! What an unfortunate last name. Heard of American Tigers, our mutual buddy, the DTVC, says it was a waste of Rothrock's talents...every movie should have more Cynthia in it.

Man, I never knew Mitch Gaylord did a Sergio Martino movie! Thanks! Great review. I'll have to check this out, if only for the soundtrack.

Thanks! Looking forward to your opinion. The soundtrack was great.