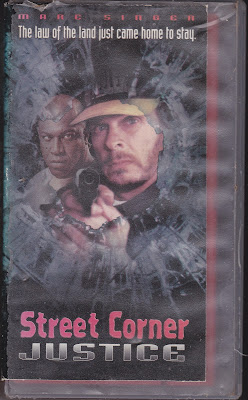 "The law of the land just came home to stay."


The wonderfully-named Mike Justus (Singer) is “The Best”. The best cop in Pittsburgh, that is. Because of his rogue ways and defiance of authority, his higher-ups decide to let him “retire early”. Justus sees this as a good time to fix up and re-sell a house his aunt left him in the suburbs of Los Angeles. Upon arriving in a section of L.A. called Norwood, he finds it overrun by criminals, hoodlums, punks, ne’er-do-wells, scofflaws, loiterers, scapegraces, Sir-Lucius-O’Triggers, delinquents, ruffians, thugs, hooligans, and the like. Not getting any help from local cop Freeborn (Railsback), Justus, along with a rainbow coalition of people in the community such as restauranteur Lee (Oh), stereotypical Irish Priest Father Brophy (Cranston), stereotypical Bible-quoting tough guy Angel (Lister), and video store proprietress/love interest to Mike Justus Jenny (Lankford), form a Guardian Angels-like group called TNB, or “Take Norwood Back”. This doesn’t sit well with the local gangs, so a showdown ensues. Will Justus actually get STREET CORNER JUSTICE?

As far as “take back the community” movies go, Street Corner Justice isn’t as good as The Annihilators (1985) or Private Wars (1993) (which also featured Steve Railsback, who must really care about his community). It’s one of our favorite themes for DTV movies, so we could never get sick of this formula, but this one in particular is just relentlessly dumb. It’s also too long, and oddly paced at that. Even though director Chuck Bail is a veteran of the movie industry, it’s like he was a newbie in the production department.

That aside, at least he had the raw nerve to name the main character Mike Justus. As if to drill the point home to viewers who may be even dumber than this movie, at one point Justus says, “There’s no justice. There’s just us.” Yes, we get it. But Mike Justus smokes - because he’s cool - and that’s something you’d never see today. No hero would ever smoke in our ridiculously P.C. society of the 2000’s. Also Singer looks a lot like David Spade in this movie. If you’ve ever wanted to see David Spade beat up bad guys and chase rapists that are Clint Howard, this might be your only chance. 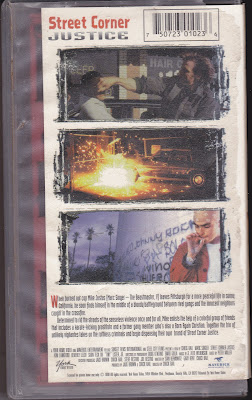 ‘Justice is riddled with cliches and stereotypes (there’s even a fast montage of nothing but cliches early on in the movie, watch out for it) and these are fun to watch, but is it enough to support a whole (overlong) movie? There are some moments which aren’t in the box of cliches, such as the fact that the main baddie and supposedly the toughest gang member in town wears a sweatervest, and the fact that this whole “citizens vs. punks” war was initiated when a fat guy couldn’t play a game of Street Fighter II. All the way up until the time-honored final abandoned warehouse fight, there’s plenty of unmitigated stupidity on show. But that may be your thing. 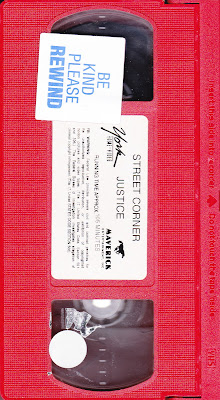 There’s also an “evil playground” that we haven’t seen since Balance Of Power (1996) - it might even be the same one as Balance Of Power, which would be weird. That’s one seriously evil playground. We can see why two movies have highlighted it. And the video store that Kim Lankford’s character, Jenny, works at is called Cine-Video, and looks like a real place. Lankford gets to sing not one, but two songs on the soundtrack. But no rockin’ tunes, just ballads. It’s a shame, a faster song might have bumped up the energy level a bit more.

Considering Mike Justus fought his whole life against red tape, it’s pretty ironic that this movie comes housed in a red tape. But no amount of gimmickry or colored inks can blot out the fact that Street Corner Justice is video store shelf-filler and a waste of a nice B-movie cast.

Definitely agree with that. Always liked Michael Otkean in that...This was a waste of Marc Singer, Railsback and Cranston.