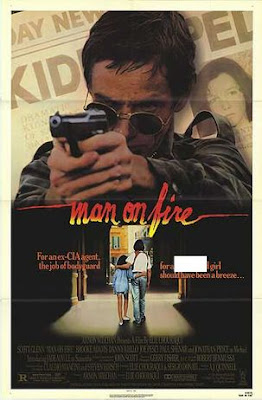 
John Creasy (Glenn) is a grizzled ex-CIA agent who has seen it all. Thanks to his friend David (Pesci), he takes a job in Italy, protecting a 12-year-old girl, Samantha (Malle) from the kidnapping danger sweeping Italy at the time. Her parents, Jane and Michael (Adams and Pryce, respectively) are never around so Creasy ends up spending a lot of time with Sam, as she likes to be called. At first he resists the relationship, but eventually he warms to her and they forge a real and solid bond. It’s just at that point, of course, that baddies get the jump on Creasy and indeed kidnap the girl. Now with nothing to lose, Creasy loads up on guns and sets out to find Sam and get revenge on her captors, especially ringleader Conti (Aiello). Will he do it? 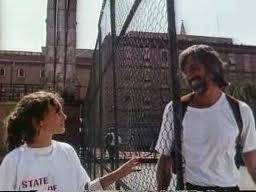 We really liked Man On Fire. It’s sort of the Taken (2008) of its day, mixed with a little Death Wish (1974)...alright, maybe it’s not quite as awesome as a mixture of those two classics might imply, but it is a worthwhile movie with a classier-than-usual vibe, and the top-notch cast and Italian settings add a lot. But truly the star of the show is Scott Glenn, who puts in a great performance as the troubled Creasy. Even his name sort of implies the world-weariness you can see on his face (“creases”). At first, he resembles Chuck Norris, but what’s cool is, when he sets out on his revenge mission, he shaves his beard, cuts his hair and starts wearing sunglasses, as if to say, “No more games. You’re all gonna die”. The movie is worth seeing for Glenn alone. 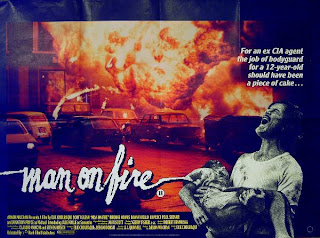 Acting as his foil is Joe Pesci, who really rocks out on his own version of “Johnny B. Goode” on acoustic guitar. This display of musical talent was obviously a precursor to his eventual CD release. That aside, what sets apart Man On Fire is the fact that it takes its time to develop the relationship between Sam and Creasy. And because it’s European, it’s all done very artistically. Perhaps the only drawback is there should have been a little MORE revenge (and there are some parts that are a little confusing) but all in all Man On Fire is definitely worth seeing.

For a quality revenge thriller, Man On Fire fits the bill.

NOTE: The movie was released on Vestron on VHS in the U.S., and before the movie there is a trailer for Amsterdamned (1988). This is the only place we know where you can see this particular trailer.

This film was OK, but it kind of meandered in the third act and the ending was rather dissapointing, while it was worth seeing for Scott Glen alone, I thought the remake was a better film as a whole.

The Glenn-fest continues! Nice one, Man on Fire does indeed sound like it's worth tracking down.

Venom: The ending was a bit odd and confusing. Glenn did such a great job though, it almost didn't matter.

The Goodkind: Thanks! We were be interested in your take on it! Got to love Scott Glenn!

I enjoyed this version. If I remember correctly there's an italian version of the film too as it's ever ever so loosely based on a true story and the king of the loveable rogues.

Got it on VHS and DVD. Also his movies Shadowhunter, Slaughter of the innocent, Night of the running man, Peter Fonda's fighting Mad, The keep, Wildgeese 2 , Firestorm and so on. Scott is one of the greatest.

John: Cool! Will have to keep an eye out for the Italian version.

Harry: Awesome! Love that you're a fan of Scott Glenn too. Have you've seen The Last Marshal? He is at his best in that.

Yes, I've seen The Last Marshall and more. Got them in my colletion of VHS (4300) and DVD (5600).
Also movies with Michael Ironside, Wings Hauser, Lance Henriksen and many more. But no dramas. Not my genre.

What an amazing collection! Totally agree about the dramas...i only collect action flicks.

Offtoppic: Do you know "Durch die Nacht mit....." (Through the night with...) Dolph Lundgren?. It is an Infoprogramm in english with german subs. Dolph is cool and smart and it is funny to see.

Cool! Thanks for the link!

Got that one and many more of them, awesome show...there are plenty of interesting people in that series...Asia Argento, John Carpenter etc... really worth seeing, and the episode with Dolph is one of the best...also there is one with Cynthia Rothrock and Richard Norton, also one of the most interesting espisodes...:)

Will have to check out those interviews. Thanks for mentioning those.

What happened with The girl at The end? Is she

This might be a spoiler for the movie for anyone else that may look at these comments, but the ending is she is found, but it's shot oddly. It is hard to figure out.