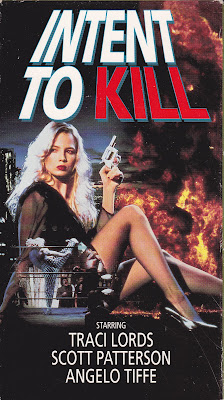 Vickie Stewart (Lords) is a beautiful female cop on the edge in this PM outing. When a drug deal goes wrong (you mean they can go wrong?), Colombian thug Salvador (Tiffe) must get millions of dollars worth of drugs to his ruthless boss, The Mooch (Curto), or Salvador will meet a gruesome end. So Salvador is going all over the seedy sides of L.A. trying to collect all he can. The only thing stopping him is Vickie, who is determined to bring down the Colombian drug empire. To do this, she must go pretty rogue, but not all the way rogue. Meanwhile, she must deal with her philandering boyfriend Al (Patterson), a fellow cop, as well as her boss Captain Jackson (Kotto)., who is always on her case.

It was nice to see Traci Lords as a tough cop on the edge. She even teaches classes to other women in street self-defense. The sleaze factor comes in with some of the seamier sides of Hollywood with hookers and such (Vickie must go undercover as a hooker at one point). Vickie is a cool character and it would have been nice to see that developed more, maybe in a follow-up movie, or a movie that doesn’t fluctuate so much...

What we mean by that is, Intent to Kill goes back and forth between decent and very dumb, and there seems to be a lot of padding and plot elements that aren’t related and/or make no sense.  But luckily there are car chases with rockin’ guitar solos behind them, blow-ups, shooting, funny moments and lots of cliches. And of course Traci Lords getting into all sorts of dangerous situations (keep in mind it must have been in her post-porn industry contract that she do no nudity or sex scenes to try to distance herself from her past...just a theory)...and Yaphet Kotto pops up as the BYC with, and we quote, “one month left ‘til retirement” ! It is a shame that he’s retiring, as every day, generic newspaper headlines appear such as “Drugs Rule Streets”. 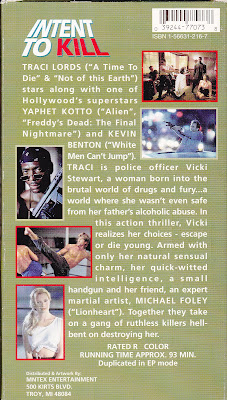 And as far as her love interest is concerned, Officer Tom Martin, he’s a kickboxing man that’s some sort of cross between Gary Daniels and Richard Norton, but not anywhere near as likable or interesting as those two. This Gary Norton (or Richard Daniels) guy is Michael Foley, and he was actually in Karate Cop (1991), so there you go.

Intent to Kill was released on the budget-priced EP speed tape released by Video Treasures/MNTEX, and the quality is not good. We’re guessing this was a posthumous release because it’s not included in some reference guides. Why this didn’t come out on PM’s own label, we do not know. It even has a shot from another movie on the cover (we believe it was taken from a Gary Daniels film). The director of this movie, Charles Kanganis, should have complained. After all, the previous year he directed Traci in A Time To Die (1991), and the packaging was much better, it even had a red plastic VHS.

Featuring the inspirational tune “Stand Tall” by Lost Art, Intent to Kill is reasonably entertaining, but not a premier PM.

My say - not the best of the PM-Pictures. And "The diamond killing" is the same.

There was actually another VHS release by Pepin/Merhi Entertainment and PM eventually did release the film on video in 1993, though it's bit more expensive then the other versions.

I'd also recommend you check out Blood Money, Desperate Crimes and A Time To Die.

Harry: Hmm, Ice isn't that good? Will avoid it for now.

Venom: Definitely agree about Traci. Will have to check out the ones you recommended.

Great review! I'm a big Traci fan as well and will have to keep an eye out for this one.

Thanks! We are sure that you will enjoy it.