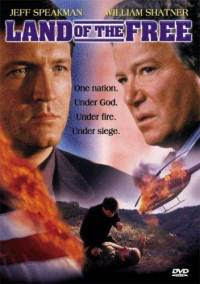 
Politician extraordinaire Aidan Carvell (Shatner) is running for the U.S. Senate. His campaign manager, Frank Jennings (Speakman) is dedicatedly working to make sure Carvell achieves his goal. However, in the course of working on his election bid, Frank discovers that Carvell is the secret head of a militia group that wants to overthrow the government.

Now he knows too much, and he goes on the run. Carvell’s people, including McCaster (Robinson), and Thornton (Lemmon) are spearheading the “let’s chase down and kill Frank Jennings” initiative, so he takes his wife and son and joins the witness protection program. But that’s not enough for the megalomaniacal Carvell, who wants Frank, a serious thorn in his side and sole blocker of his evil plans, dead. So who will come out victorious, and who will live in the LAND OF THE FREE?

Wait. You mean to tell me there’s an actual movie where Jeff Speakman and William Shatner co-star, they get into confrontations with each other, and eventually fight? Where do I sign up? In truth, Land Of The Free isn’t quite as awesome as the presence of the aforementioned power-duo might imply, but it’s still entertaining and worth seeing. Chalk it up to PM, they really have a winning formula and they stick to it. Plenty of car chases and exploding, flipping cars are the order of the day once again. But as we’ve said before, PM has turned it into an art.

As for Shatner, he’s looking quite robust and apple-cheeked here. His classic herky-jerky line reading delivery of course is on show. Be it Star Trek, Land Of The Free, TekWar, or any of his other projects, Shatner always speaks the same way. So it’s nice that, even in a DTV PM movie, he’ll say a line such as “I don’t believe it” like “I-don’t-believe...it.” Does anyone else find it amusing that in this movie he plays a supposedly pro-American guy, but he’s really Canadian? That truly is range. And yes, his name is Carvell, which will inevitably remind you of ice cream. Adding an extra “L” isn’t the cleverest way to cover that up. Judging by the pounds that both Speakman and Shatner put on, maybe Carvel sponsored this movie. Perhaps naming Shatner’s character that is just an homage to Cookie Puss and Fudgie the Whale.

Cleverly, the filmmakers never assign a political party to Carvell. You can read your own biases into him. He’s sort of a melange: they call him a “Maverick”, which will remind you of John McCain, but his enthusiasm is very Howard Dean-esque. His political stances seem to be in the Ron Paul camp. So he’s a little bit from every party, and even the name Carvell, after all, maybe isn’t from the ice cream, it’s a sly reference to James Carville? We may never know.

Like the world in general, the movie needed more Shatner. There are large sections where he’s not even involved with the plot. But we know one thing for sure, he really loves his antiques.

So Frank Jennings, Speakman’s character, is constantly beating people up with his trademark Kenpo style, shooting people, and using renegade tactics like jumping off buildings and wild car chases to evade the baddies. Keep in mind he’s not Carvell’s bodyguard, he’s his campaign manager! That’s one badass campaign manager. He should run for a new political position: Speakman Of The House!  But he does wear a red shirt, blue jeans, and his skin is white, so we can only assume he is, without saying it, more “American” than the evil Carvell, at least based on his wardrobe choices. And that really is the best way to express your patriotism.

People shoot their guns sideways in true “gangsta” style, there’s a restaurant that sells something called “pastrami shrimp”, and the movie is more relevant today than ever before. It’s all underpinned by inappropriately patriotic musical stings, even during car chases. Are they supposed to be especially patriotic car chases? Again, we may never know.

Especially in this election year of 2012, more people should see Land Of The Free.

Comeuppance Review by: Ty and Brett
Posted by Ty at 6.8.12

I was always rooting for Speakman to do better things as I kind of dug "The Perfect Weapon," but it seemed like that was never in the cards for this guy. Kenpo can be a pretty nasty little martial art in the right hands, and I've seen this guy do some live demonstrations on television talk shows.

Agreed! Always wanted to see The Perfect Weapon. He should have been a bigger star.

"Speakman of the House". That should be a movie right there. I think Speakman's the right age to play a Kenpo fighting Prez.

Agreed. That could be a fun movie...he Kenpo fights terrorists and other assorted baddies! Haha.

Since discovering Speakman doing my Dr.Action and the Kick Ass Kid commentary show with Paul, I really really like the guy and his fighting style. I even liked this movie. So it's a shame the man didn't have a bigger career...

Great commentary by the way!

So, did they photoshop away his apple cheeks on that DVD cover or what? He looks pretty decent there. Maybe it was the ice cream.

Haha, good question! It probably was the ice cream.