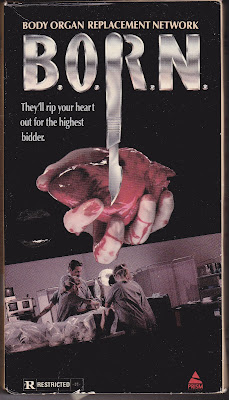 
Buck Cassidy (Hagen) is a big-hearted cowboy who, with his wife Della (Claire Hagen) have, over the years, adopted seventeen foster children. When three of his adopted daughters are kidnapped and thrown into an unlicensed ambulance, the nightmare begins. It turns out innocent people are being taken from off the street, put into dingy operating rooms, and their organs are removed and sold to the highest bidder on the black market.

Dr. Farley (Smith) is the sinister surgeon, Jerry (Clint Howard) is the creepy male nurse, Liz (Soles) is the secretary, and the super-evil Hugh (Tamblyn) is the agent that acts as the liaison between the desperate families that need the organs and the unwilling participants. So Buck contacts his old buddy Charlie (Howell), a retired LAPD cop, and the two of them search all over the L.A. area for the missing girls. But will they be too late?

The main reason we sought this movie out is because it contains most of the cast and a lot of the crew from one of our favorite movies, Action USA (1989). B.O.R.N. is almost like a dry run for their later masterwork. Ross Hagen, Claire Hagen, Gregory Scott Cummins, William Smith and Hoke Howell all reconvened the next year after B.O.R.N. to make the great Action USA, and the second unit director for B.O.R.N., John Stewart, became the director for Action USA, and later Cartel (1990). So when we heard that the Action USA team had tried their hand at a horror-themed film about a “Body Organ Replacement Network”, obviously our interest was piqued.

But you can tell they wanted to do an action movie all along, because there are shootouts, fisticuffs and car chases in B.O.R.N., making it less a straight-up horror movie and more a thriller with some action and horror elements. 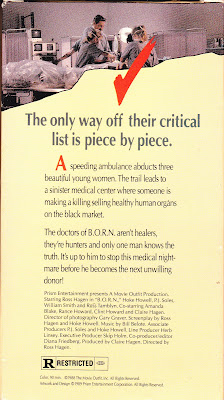 William Smith is delightfully unintelligible as the main surgeon. Sure, it’s odd to see Smith as a surgeon, but that adds to the weirdness. PJ Soles is almost unrecognizable as the big-haired Liz. Russ Tamblyn stands out as one of the more evil baddies we’ve seen in a while. Clint Howard, playing, surprisingly, a creepy rapist, later reprised his role in Street Corner Justice (1996) (and probably a lot of his other roles as well). Rance Howard is also on board and he resembled Night Court’s Harry Anderson more than his brothers Ron or Clint.

At first it’s hard to tell who’s who in the movie, because everyone is inexplicably wearing cowboy hats in modern-day L.A., but eventually you can discern who the characters are. The editing is almost as choppy as Dr. Farley’s scalpel-work, but then there are some oddly funny moments to distract you from that, such as when Buck and a large group of people are at a large dance called “Adopt A Grandparent Day” and they’re all dancing in a circle singing “Beautiful Dreamer”.

And sure, there’s a bit of what you might call “surgery gore”, but the main problem is that the movie needed to be tightened up. Most of the running time consists of Hoke and Hagen searching around town for the missing daughters. It’s almost like the B.O.R.N. concept couldn’t fill 90 minutes on its own. There should have been more going on plotwise. But there are enough silly/Un-P.C./worthwhile moments to keep the movie afloat.

In the music department, a band called Pigmy Love Circus plays at the aforementioned “Adopt A Grandparent Day” (good gig!) and Dawn Wildsmith is uncredited as the singer. Wildsmith was also in Cyclone (1987) with Russ Tamblyn and John Stewart, not to mention Armed Response (1986) with Ross Hagen. The end credits song (which also appears in one of the many scenes when Hagen is searching the city in his van) is “sung” by Ned Albright. It seems this was his first attempt at singing. Not just in front of a microphone at a recording session...I mean EVER. Is this the best they could have gotten? NED ALBRIGHT?

In all, B.O.R.N. is an amusing curiosity, and its claim to fame, besides its cast, is that it paved the way for Action USA.

Comeuppance Review by: Ty and Brett
Posted by Ty at 3.8.12

I nominated you guys for a Blog award. Details are on my site.

Hi, this probably isn't the right place to put this, but I'm just leaving a message to say that Blueprint: Review has chosen your site to get a Liebster Award! http://blueprintreview.co.uk/2012/08/we-have-received-the-liebster-award/

M. Brown: Thanks so much for nominating us. We really appreciate it. You deserve one too.

Dave or Did: Thanks! Really appreciate the nomination!