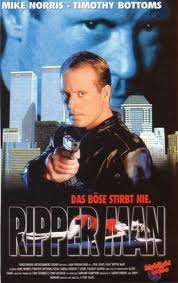 
Mike Lazo (Norris) is a former San Diego cop who decides to try his hand at becoming a nightclub hypnotist. The club manager where he works, Harry (Napier), is sympathetic towards him, as is cocktail waitress Gena (Shinas), but for Lazo his act just isn’t coming together. One day a mysterious man named Charles Walkan (Bottoms) asks Lazo to hypnotize him. While under hypnosis, Walkan seemingly becomes a man named George Chapman, a man thought to be Jack the Ripper. Soon, Walkan/Chapman is off on a killing spree, but all of Lazo’s former buddies on the police force don’t believe the “he became a serial killer under hypnosis” theory, and to boot, they blame the killings on Lazo! So now Lazo must clear his good name and take down Walkan. Or Chapman. Or whoever he happens to be that day. Can he do it?

Ripper Man is a bit of a different role for Mike Norris. It’s a blessing and a curse: on the one hand, it’s good to be different every once in a while. But on the other hand, it seems like certain things are missing. There’s almost no Martial Arts (but we didn’t expect there to be any in a movie called Ripper Man) - but there are some cop movie cliches. Probably the movie highlight was the shootout in the hospital. That was an action scene. The rest of the movie is pretty much your standard mid-90’s thriller, despite the fact that it tries to be a little more intelligent at first. Despite, at the outset, trying to inject some smarts, it soon devolves into a standard cat-and-mouse kind of situation and all the pretenses are out the window. 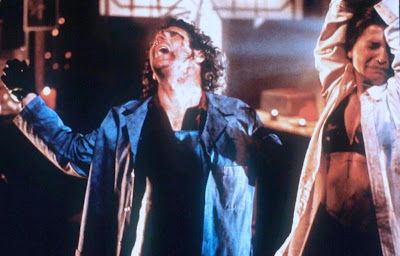 As for the rest of the cast, Timothy Bottoms, sporting a sillier-than-usual haircut, looks like a cross between Kevin Kline, Steve Guttenberg and George W. Bush. And normally he just looks like George W. Bush. He’s even played “W” numerous times. His Lone Tiger (1999) co-star Bruce Locke - yes, Kurenai himself! - appears as a San Diego cop and friend to Lazo. It was nice to see him again. It’s funny to think he did this and Lone Tiger back to back. Charles Napier is under-used, as is George “Buck” Flower. It’s director Phil Sears’ only film to date. It’s almost a shame, really, because our guess is that video store patrons in the mid-90’s didn’t really give this movie much of a chance. Not that they’re missing all that much, but somehow this got lost in the shuffle and we feel just a tad bit bad about it. No one ever talks about Ripper Man (and how they never saw it). It should at least go in the cultural lexicon. Maybe somewhere towards the back.

Maybe it was the title, maybe Mike Norris scared people off, but no one seems to have seen Ripper Man. We can’t suggest you expend really any effort on finding this VHS, but if you happen to see it cheap somewhere, it can’t hurt too much to add it to your collection.

It's in my VHS-Collection. "Ripper Man" is a good Thriller.Or what you wrote: "Standard".


Mike Lazo (Norris) is a former San Diego cop who decides to try his hand at becoming a nightclub hypnotist.

Oh, that old story.
But seriously, very entertaining review. If I can find this one, I'll give it a shot. I mean it's called Ripper Man! That alone is badass.

Harry: It was decent, perfect cheap rental or purchase.

M. Brown: Haha! It is a ridiculous plot. Thanks!...one of the reasons we bought it was because of the title...and Mike Norris. Haha.

Mike Norris sure is in some interesting films, he was also good in Delta Force 3.

It seems I have to learn English. Sorry.

Venom: Mike Norris is pretty decent when he wants to be.