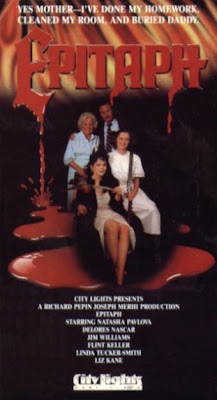 
A family - high school student Amy Fulton (Pavlovich), her mother Martha (Nascar), her father Forrest (Williams), and Forrest’s elderly mother Virginia (Kane) - move into a house in southern California. The problem is, they’re constantly moving from place to place because of the completely unhinged Martha. This evil non-stepmother is a psychotic lunatic, and her drinking problem only exacerbates the situation. Everyone knows she’s mentally unstable, so Forrest visits a psychiatrist, Shirley (Tucker-Smith), on Martha’s behalf. Shirley then decides to go undercover and pretend to be Martha’s friend so she can see what’s really going on. But what’s really going on is DEADLY! Meanwhile, personable, athletic high school student Wayne Hollander (Keller) takes a shine to Amy and they begin to forge a relationship together. But Martha fanatically insists that Amy not speak to any boys at school, much less have a normal relationship. Wayne seems to be the last link to reality that Amy has to try and escape the smothering household she comes from. Will she do it?

We’re fans of the proto-PM outfit City Lights, and we believe this is one of their best. While its low-budget look may put off some superficial people, we found Epitaph to be engaging, unique and even fascinating at times. Writer/director Merhi blended a melodramatic family drama with some classic horror elements. It wins the audience over when we can see that the filmmakers and performers were earnestly trying. Maybe that’s what’s so endearing about the City Lights phase in Pepin and Merhi’s careers. While some technical aspects may be somewhat lacking, effort certainly isn’t, and that should count for something. But that aside, we think this trumps their other horror title, Hollow Gate.

Delores Nascar, not to be confused with the popular racing organization, does indeed put in an over-the-top performance. While Nascar did a more-than-competent job, we also felt Karen Black or Sean Young could have played the mother. But while she was busy with her histrionics, Natasha Pavlovich quietly steals the movie. Pavlovich basically carries Epitaph - you relate to her, you feel for her, and she shows a lot of emotion. And this was one of her first roles, she’s clearly a natural actress. She also has good chemistry with good old Flint Keller, who that same year, 1987, got more of a starring role in Fresh Kill (1987).

So while the dialogue may be delivered in a way that many viewers are unused to hearing (especially when there’s tinkling piano behind most of it), we say that’s all part of the charm of Epitaph. It’s a solid, worthwhile movie, and features a torture scene unlike any other we’ve seen. Add that to the 70’s-style downbeat ending, and you have an under-the-radar horror concoction that more people should see.  Although, granted, only a certain segment of the viewing populace, especially today, is likely to truly appreciate Epitaph. That’s a shame - if only more people got a chance to see it, more people would appreciate it and talk about it. So that’s what we’re trying to do here, shine some light on an all-but-forgotten gem.

Featuring a show-stopping cameo by Richard Munchkin as a guy at the mall named Warren, we say check out Epitaph.

Yeah this was a pretty entertaining film, didn't really like the ending though.

That is understandable, we thought worked as a whole.

This was released on VHS here in Finland in severely censored form. The torture scene, for example, was nowhere to be seen. Have to watch it again uncut sometime.

I liked the film and how they avoided the normal 80's slasher flick route, making a mean-spirited and twisted horror drama instead.

It had the usual City Lights videography / home movie look though. Still not sure if I find it more off-putting or charming in a b-movie way.

That's unfortunate about the censorship. Still a solid movie.