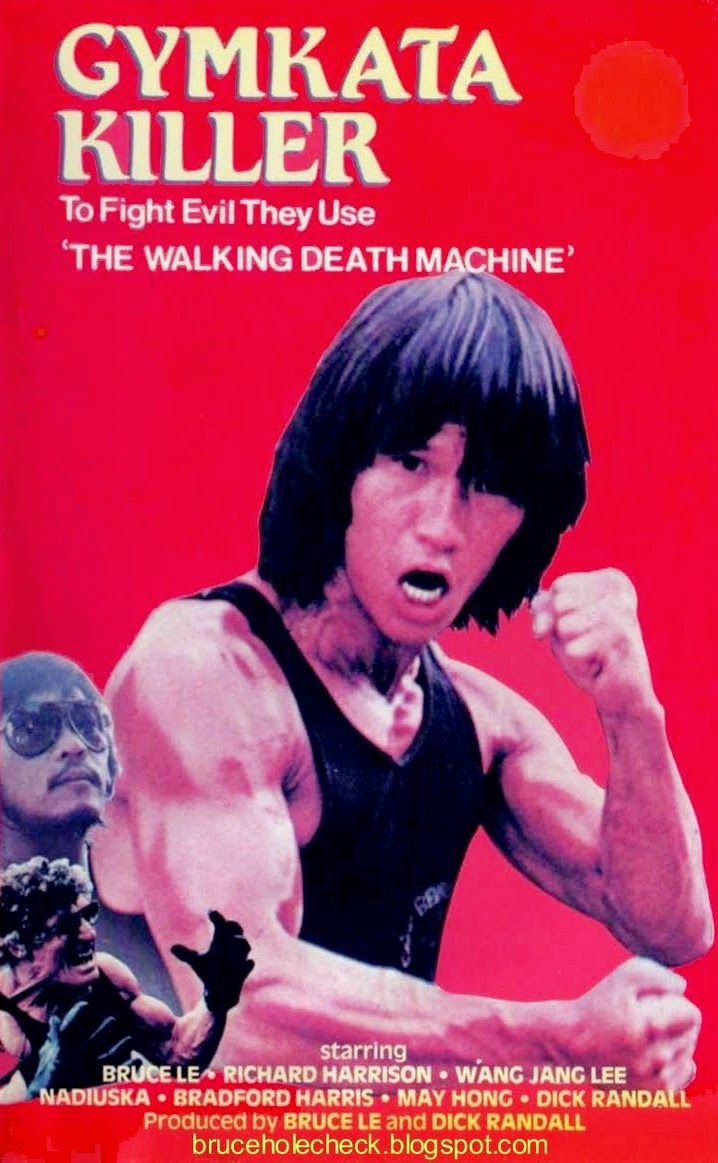 
When a super-secret new drug hits the market that will kill all the sperm in the male body, bad guys the world over want to get their hands on the formula so they can use it to take over the world. Unluckily for them, two of the best CIA agents in human history are prepared to go to any lengths to stop them: Huang Lung (Le), who, naturally, is a great Martial Arts master, and Richard Cannon (Harrison), who is the ultimate ladies man.

But he’s going to have to put his rampant womanizing on hold so he can join Lung.  Traveling from Spain to Hong Kong to get justice and prevent the formula from getting into the wrong hands, can this odd couple do it?

We’re big fans of Ninja Strikes Back (1982), which is kind of like a companion film to Challenge of the Tiger, in the sense that they are both Dick Randall productions, both star Bruce Le, and are both clinically insane.

While we happen to prefer NSB a little more, there’s plenty of pleasure to behold within COTT. You’ve got to love the 80’s, a time when if you weren’t an Asian gentleman with a Johnny Ramone haircut doing Martial Arts moves wearing tight flared jeans and a white sportcoat or Lacoste jacket, you just weren’t cool. By those standards, Bruce Le is the height of awesomeness, doing what he does best, and even co-directing the movie. 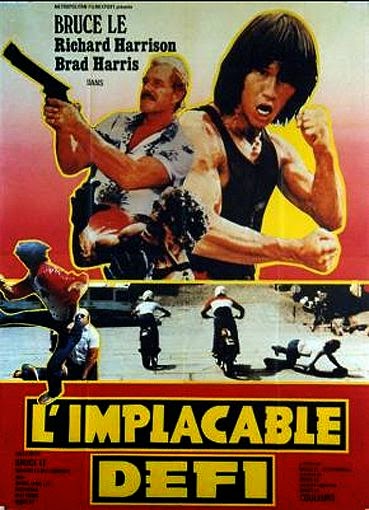 And lest we forget Richard Harrison stretching his acting chops as Richard Cannon. At least this movie is relatively coherent as opposed to his Godfrey Ho appearances. As the last word in suavitude, Cannon, inexplicably for a CIA agent, has a compound filled with topless chicks that do activities with him such as play tennis and go swimming. This guy puts Hugh Hefner to shame. Well, even more shame.

Also in the cast is one Brad Harris, who plays a bodyguard named Leopard. He resembles The Stabilizer’s Peter O’Brian, and has some killer shades. Bolo Yeung is also on board, playing a character named Comrade Ban, but every time he’s addressed in the movie, it sounds like they’re calling him “Conrad Bain”. Wouldn’t Bolo acting as the father on Diff’rent Strokes be amazing? Now that really would be a different stroke.

Also there’s some seemingly stolen footage of Jack Klugman and Jane Seymour thrown in. Klugman is seen talking to Bruce Le. What could they have been talking about? Even though he didn’t seem to be aware that he was being filmed, Klugman should have had a bigger role in Challenge of the Tiger. 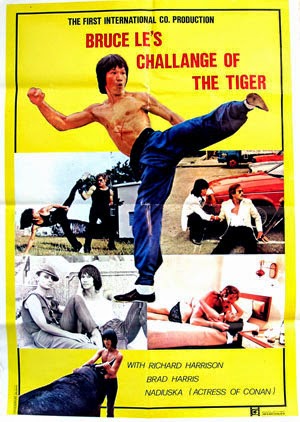 The music is excellent, a winning kind of soul-funk that complements the onscreen action well. There are even unabashed ripoffs of Bobby Bloom’s “Montego Bay” and Isaac Hayes’ “Hung Up On My Baby”. The fact that there was no legal action that we know of is a testament to the freedom of the run-and-gun 80’s. The 80’s were just better than now. They just were.

Anyone who thinks otherwise is wrong. Exhibit A in our court case: Challenge of the Tiger. (Exhibit B would be all the 80’s slasher movies). Richard Cannon’s lovin’ the ladies would probably be classified as “sex addiction” today. Need we go on?

This movie is just fun, funny enjoyable fun. Repetitive? Yes. Fun? Undoubtedly. Just check out the scene that gives TRUE meaning to the word “Bullfighting”. Seeing as the Mondo Macabro DVD is paired with the legendary Weng Weng vehicle For Your Height Only (1981), there’s no reason not to own this fine disc.

It saddens me that no one has commented on this movie yet. Between the mind-boggling sartorial fashion (Brad Harris's look) and the mind-juggling topless tennis, this is a truly incredible movie. For the average viewer, it may be a little challange-ing (as per the poster), but for us true connoisseurs, this can only be described as a winner. And that's no bull. All I can say is, Thanks for the recommendation.

Your comment is spot on as usual, Roger. We look for weirder movies on the action spectrum, so if you have any suggestions, comment back anytime.

Fortunately, the world is full of weird wonders like Billy Blanks's haircuts and Steven Seagal's DTV voice(s). Of course, you're familiar with the American PM and AIP output. The Italians made the weirdest action movies, in my opinion. Anything by Enzo G. Castellari is recommended, as is anything filmed in the Philippines, or made by Rapi Films in Indonesia or Davlan International in Thailand.
Some recommended movies:
Escape From The Bronx
The Last Hunter
Cannibal Apocalypse (in spite of its name, it's more of an action movie)
Thunder (Warrior) (the first one is awesome)
Ten Zan (How often does one get to watch a movie filmed in North Korea and produced by the Great Leader?)
The Big Fight (great Chinese movie from 1972, it might be the first Punchfighter?)
Ironmaster - is fun
Thor The Conqueror (not that good, but funny/weird)
The Barbarians - another fun movie
Double Target with Miles O'Keeffe (similar to Strike Commando, awesome)
Phantom Raiders with O'Keeffe (I think this one would really float your boat)
One movie that I watched this week and thoroughly enjoyed was Aftermath from 1982 with Steve Barkett. It has one of the greatest covers ever: http://www.fixgalleria.net/release.php?id=1421

These are just off the top of my head, but I don't think you've reviewed any of them. Luckily, the 80s and early 90s are a goldmine of cinematic weirdness. I'm still finding golden nuggets almost every week.

Thanks for the suggestions! We have seen some of them and we will try to track down all the others. Thanks again, buddy.

Have you watched Endgame or 2020 Texas Gladiators? They are both highly recommended weird and wonderful movies. Endgame was the original Running Man and Texas has an awesome bait-and-switch cover.

The Indonesian movie Jaka Sembung / The Warrior is probably the weirdest action movie I ever watched. I wouldn't call it good, but it is funny. It includes wackiness like an eye transplantation performed with wooden knives. At one point, our hero is magically transformed into a pig. Muslims must certainly hate pigs, because when our hero the pig walks into a village, everyone runs out to hit him with sticks. The movie also has a magical flying head. Surprisingly, it's not Jalal Merhi's.

Haven't seen any of those three you mentioned. We will have to track those down. Jaka Sembung / The Warrior sounds insane! In a good way.

Many of these rare movies are available on websites. Are you familiar with rarelust.com , wipfilms.net or myduckisdead.org ?

Haven't heard of those! But we will look into them. Thanks!