"The Future Has A Bad Attitude"

Back in ‘Nam, soldier Luc Deveraux (Van Damme) met and became mortal enemies with the sinister fellow soldier Andrew Scott (Lundgren). Luc objected to Scott’s killing of civilians, and in the ensuing brouhaha, they end up killing each other. Or so we think. In 1992, they, along with other former soldiers have been turned by the government into “Universal Soldiers”, or “Unisols” for short.

They are part man, but part machine as well, and have been programmed to follow orders emotionlessly. But slowly both Luc and Andrew start to regain more and more of their humanity. Luc escapes the compound with reporter Veronica Roberts (Walker) - but Andrew is not happy about that. So now Luc and Veronica are on the run, with Andrew chasing them everywhere they go and causing a lot of mayhem along the way. Old grudges die hard as the final fight proves. What will happen? 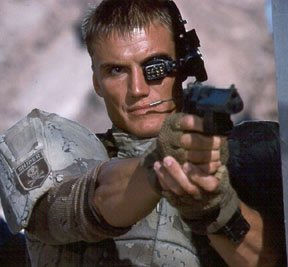 Universal Soldier is a classic from the golden age of action in America. This was a time from the late 80’s to early 90’s when movies like this went to the theater and had decent budgets behind them. And this in particular was such a success that is spawned four (soon to be five as of this writing) sequels. But the high quality of this production goes a long way and is nice to see, especially in light of the brutal violence and constant, messy head shots which are usually reserved for lower-budget outings.

But, beyond the violence, there are some interesting messages at work. One is that humanity will always remain in us and is stronger than any outside force. Despite all that has happened to them, Luc is still good and Andrew is still evil. The movie also tries to make modern-day parallels to their ‘Nam experiences. Funnily enough, there’s a (probably inadvertent) pro-steroid message, as characters get stronger and win fights after they inject a chemical into themselves. 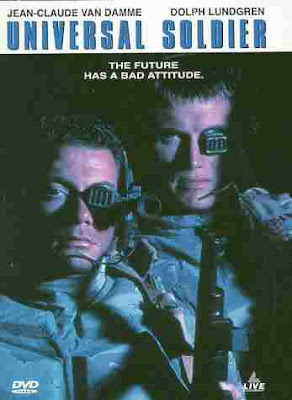 Besides Van Damme and Lundgren together at last, we shouldn’t forget Ralf Moeller is on hand as well. That’s right, Brakus himself plays a Unisol. Now that’s an amazing power-trio if there ever was one. As if that wasn’t impressive enough, Tommy ‘Tiny’ Lister and Simon Rhee also play Unisols.

Of course, the whole program was developed by Lennie - i.e. Jerry Orbach - who really doesn’t get a lot of screen time. Ally Walker as the classic know-nothing reporter who serves as some kind of audience identification is okay, not great. But Dolph puts in a rare animated performance and seems to relish being the super-evil baddie here.

While the movie follows a very definite formula, there’s also plenty of humor so the proceedings don’t get too dour. Part of that, presumably, is the surprising amount of un-asked-for, unneeded Van Damme nudity. But the Unisols are kept in cold storage like so many hot dogs, and their eyepiece resembles an evil monocle, adding to their scary appearance. It’s also amusing to see Belgians and Swedes fighting in the Vietnam War...but come to think of it, this movie can really be summed up in three words: Necklace Of Ears.

Just get some action stars and a solid budget and entertainment will ensue. If only Hollywood kept on this path, but sadly they didn’t. If you haven’t yet seen it (or haven’t seen it in a long while), see Universal Soldier.

Also of note, this one was done by director Roland Emerich who would later bring us "Independence Day" another sci-fi well budgeted action smash. This one is still enjoyable even so many years later, and watching Lundgren and JCVD's battle of roids in the end is priceless! If only JCVD had more like this one on his resume.

Can't agree more. JCVD needs more movies like this! Thankfully he is making Universal Soldier: A New Dimension with Dolph and Scott Adkins!

Yah!! Finally another film I have seen on your blog! God I'm getting old and can't believe this was made in 1992. That is 19 years ago and I was only 21!
I saw this on the big screen and thought it an above average actioner. Can't remember much about it as I haven't seen it for quite a number of years now after seeing it again on telly. Have always wanted to revisit it and see what it looks like now.

We can't believe it was almost 20 years ago too! Time really flies by. It still holds up as a fun action flick.

Great review! Definitely one of Dolph's and Van Damme's best right at the height of both of there careers. With all the sequels they've made and will make, none seem to be able to match the sheen Emmerich put on the first one. That's why it will always be the best of the bunch.

Thanks! Totally agree. Regeneration was great too.

Probably the one and only Roland Emmerich film I can stand watching without rolling my eyes at the cliche-ridden dialogue and over the top special effects. Big budget nonsense like Independence Day and The Day After Tomorrow just rubs me the wrong way. Then there's films of his like Stargate, which even as a big fan of the series that spawned from it feels kinda flat to me. And the less said about 98's Godzilla, the better.

This one though. Good stuff. Obviously having JCVD and Lundgren in their prime helped tremendously.

Without Dolph and Jean-Claude, this would have been a major dud! As for other Roland Emmerich movies: "The Patriot" does have a couple of cool moments. "ID4" is a product of the 90s. It is probably really hard to watch today.

I like Stargate and Independence Day well enough, Moon 44 was also underrated, The Patriot and 2012 were both total crapfests though.

Heard 2012 was pretty bad! Saw the TV ad showing John Cusack drive a car out of a moving plane!

Dr. Blacksteed has gone underground (due to the authorities) and I'm focusing on my public enemies blog for a while (just a heads up if you were wondering).

I call shenanigans on the 3.5 stars rating, unless you docked it half a point for the annoying chick. Universal Soldier is my favorite action movie of all time. Fond memories of watching it with pops when I was a tyke.

We did dock half a point for the annoying reporter.

We are happy this brings back fond memories for you, M W!

I do like this movie, but I definitely wouldn't call it my favorite action film, that honor goes to Face/Off.

Face\Off is a classic! Nic Cage at his best.

I had the privilege of seeing Face/Off at a drive-in! Fun times!

Nice! Drive-Ins are great, usually they are two features. Do you remember the other one?

Gotta love this movie. The Dolph fist pump after tossing a grenade was amazing. Great stuff.

Haha, that was great! Classic Dolph! We loved how animated and energized he was.