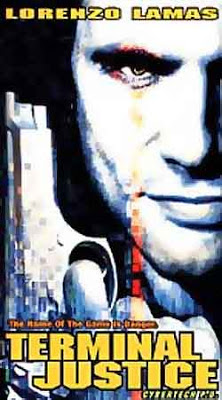 
Sgt. Bobby Chase (Lamas) is an ex-Special Forces veteran of the 2002 Russia Cartel Wars. In that conflict which took place in the future which is now the past, his evil captors destroyed his eyes, and now, in the present/past of 2008, working as a cop, he has cybernetic vision. He’s assigned to protect movie star Pamela Travis (Wuhrer), who is constantly under assault from the goons of scientists who want to clone her. Yes. Scientist goons. The nefarious super-genius-evil-cloner is Deacon Vivyan (Coyote) who is working with fellow baddie Reginald Matthews. You know he’s evil because his name is Reginald. And because he wears high-collared shirts.

Naturally, Chase and Travis end up becoming romantic, and in order to get to the baddies once and for all, Chase has to reluctantly team up with ponytailed techie Takamura (the awesomely-named Tod Thawley). Living in the future with all this newfangled technology can be a blessing and a curse, as Chase is about to find out the hard way. Will he ever get TERMINAL JUSTICE?

Things got really terminal in the 90’s, what with a spate of “Terminal” movies such as Terminal Velocity (1994), Terminal Impact (1995), Terminal Virus (1995), Terminal Rush (1996) and, of course, the movie on offer today, Terminal Justice (though it’s also known as Cybertech P.D.). And because it was the 90’s, we have another outing that involves VR and Cyber-matters. That truly was the obsession of the day, and Terminal Justice borrows from Demolition Man (1993), Johnny Mnemonic (1995), Virtuosity (1995) and even Hologram Man (1995). But yet, it also has some interesting ideas of its own. The whole “virtual reality crime scene” was a fascinating concept, and there are a few other gems in there as well. So it’s kind of a mixture of forward thinking sci-fi concepts mixed with The Kill Reflex (1989)-style murderous toy helicopters. 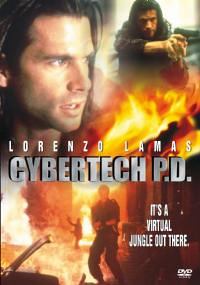 Lamas is especially meatheady in this one, almost to Evan Lurie levels. But we’ve yet to see Lurie display the type of emotion Lamas does here, he even cries, showing that he has a sensitive side and isn’t all long hair and comically oversized bathrobes.  His new partner, played by Thawley, is sort of a hybrid Keanu Reeves/Don The Dragon/Jerkface, who starts off as arrogant and unlikable, but you sort of come around. Kudos to Thawley for bringing us along on his character’s arc. Connecticut’s own Kari Wuhrer has never looked better, and though fans know her as Kari Wuhrer, for this movie she took her current husband’s surname and is credited as Kari Salin. Who did she think she was fooling? Regardless, it remains one of Salin’s best roles to date. She even has a talking house (in this case named Ludmilla), much like Ed Marinaro did in The Protector (1999). It should only be a matter of time until we all get our own talking houses. 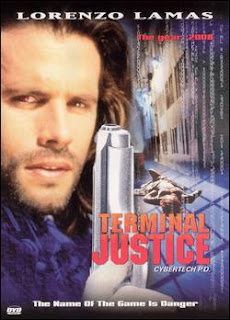 Director Rick King, who brought us Prayer for the Rollerboys (1990), as well as arguably the best Kickboxer movie, Kickboxer 3: The Art of War (1992) - which singlehandedly saved that series from going into the doldrums - here delivers an unfortunately junky-looking final product. That it’s another “shot in Canada but we’re going to pretend it’s somewhere else” production is one thing, but the constant close-ups don’t really do the movie any favors either.

But there is some energy and ideas, which is good, but the fact that it was released as a Platinum disc doesn’t bode well for potential viewers. At least he started the movie on an exciting note, with Lamas shooting a machine gun and screaming - and later got into talking about things going “online” with illegal VR games and such.

Despite some of the typical DTV pitfalls, Terminal Justice isn’t that bad. It can proudly stand with all the other Terminal movies of the 90’s.

Also check out reviews by our buddies The Unknown Movies and  DTVC!

As if Lamas wasn't awesome enough!

"Shot in Canada but we're going to pretend it's somewhere else" should have its own tag!

Haha! We will have to start doing that.