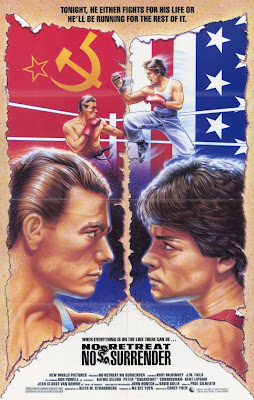 
Tom Stillwell (Baker) is an L.A. Karate instructor, and his son Jason (McKinney) is one of his students. When the elder Stillwell runs into some trouble with gangsters, notably the evil Ivan “The Russian” Kraschinsky (Van Damme), the family heads up to Seattle to start a new life. Things are looking up when Jason makes friends with R.J. (Fails), but then a series of bad events causes Jason to despair and re-evaluate his life. Jason is an admirer of - nay - obsessed with Bruce Lee. He attempts to model his life after the legendary figure, even going to his gravesite and talking to him. Meanwhile, his confidence begins to grow, and it all leads to the final confrontation with Ivan. But Jason will have help from a very special trainer...

No Retreat, No surrender is classic 80’s fun at its best. Well-known director Corey Yuen invests the film with a lot of energy, whether it be fighting sequences, training sequences, or just scenes of over-the-top drama or comedy, something is always going on and you’re never bored. The great music even inspires several dance sequences apropos of nothing, and even R.J. gets in on the fun with an impromptu rap/dance when he first meets Jason. Isn’t that what you did when you met your new best friend? 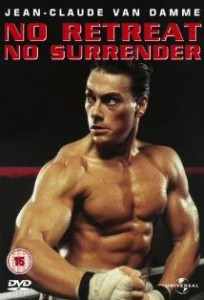 A lot of the conflict in the film is not driven by the supposed antagonist Van Damme, but by nefarious fat kid Scott (Lipham). There are plenty of hijinks as this corpulent busybody inexplicably commands an army of fellow no-good punks. He even kicks things off with the disparaging comment (directed at Jason), “he said L.A. Karate is better than Seattle Karate”. Who knew this ancient rivalry stirred such forceful feelings? Or that it existed at all? Yes, the time-honored “L.A. vs. Seattle” Karate battle started it all.

While Van Damme is always front-and-center on all the artwork for this movie, his screen time is very limited. He shows up at the beginning and the end, and has minimal dialogue. Pretty much all he says is “I’m the best” and maybe a few other brief things, though he does find time to do one of his trademark splits. His character of an evil Russian named Ivan who is emotionless and says little seems modeled after Rocky IV’s Ivan Drago. During the final end brawl, the “Seattle Sidekicks” which consist of Dean “Shooting Star” Ramsay (Jacoby) and Ian “Whirlwind” Reilly (Pohnel), battle Ivan, who, also without explanation, enters the ring not with the gangsters from earlier in the film, but a posse of Hispanics. 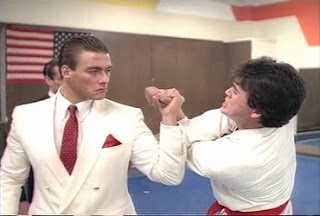 And while Van Damme’s credit in the opening sequence is “Ivan the Russian”, his end credits name is, once again with no explanation, Karl Brezdin! Could this be an oversight? because if so, what an oversight! Or is it yet another movie where Van Damme does a double role? Who knew that trend started here?

Seeing as the movie was written by Keith Strandberg, it has some familiar trademarks of his style - he also wrote the two NRNS sequels, as well as King of the Kickboxers (1990), American Shaolin (1991), and Bloodmoon (1997), among other items, so if you’ve seen any of those, you get the idea.

The song “Stand on Your Own” (and if I may add some more lyrics: “There’s no retreat and no surrender-er-errrrr!!!”) by Paul Gilreath is memorable, and it’s no wonder, as Gilreath is also credited with additional music for the classic Knights of the City (1985).

It’s fun, upbeat, and even childish (in a great way), so like Jason and R.J., make “No Retreat, No Surrender” a personal motto to live by.

I always get really confused about the different cuts of this film. There's a UK cut and US cut. Both have different theme tunes - US has "Stand on Your Own", while the UK has "Hold on to the Vision". I've only seen the (apparently inferior) UK version and I've gotta say it's pretty awesome.

Terrible acting but lightning fast action. The training montage is brilliant as is the bizarro 'special' teacher Jason has.

After watching this film I always want to go out and challenge random people to kickboxing matches.

For me, Part 2 is the best movie of the series but Part 1 is a close second.

Haha, that would be awesome to challenge random people to kickboxing matches!

Totally agree with your comment. This was pretty fun and that part 2 was a little better (and it had Matthias Hues).

Can I just check as it sounds like you've seen the US cut and I've seen the UK version. Does the US one still have the bit during the montage where Jason doing press ups while RJ sits on top of him suggestively eating an ice cream??? Because I found that bit to unintentional comedy gold!

Check it out, starting at 0:43
http://www.youtube.com/watch?v=HPLTBtWH4GQ

Dude, this was a staple in my house for a very long time when it first hit VHS. You brought back some fond memories. Great review Ty!

Jack Thursby: Don't think we saw that odd bit! That is hilarious though!

RobotGEEK: Thanks! Also my brother Brett also helps with the reviews. He does a great job.

We are very happy we brought back some memories to you!

I really like this movie, not just because i was a total van damme fanatic back in the day...its very entertaining, even outside the karate stuff. The euro soundtrack is way better in my humble opinion, and finally available, after we hungered for it so many years.
Since i was totally obsessed with van damme, i also found the longer cut on a danish or swedish dvd, interesting, but no fighting stuff.
In case you guys have any questions regarding van damme, dont be shy, just ask...and van damme is also mispelled on the american poster, i believe it was jean clause van damme,lol.

Totally agree! Back in the day, all we watched was early Van Damme. Thanks for the offer, What is that bump on his forehead?

Great movie, great review. The old UK vhs version was heavily cut. But the UK dvd is much longer.

On a side-note, the guy who played the fat bully (Kent Lipham) used to frequent the IMDB message boards, and seemed like a genuine nice guy, who (although not a huge star) would send out autographed pictures to anyone interested. Sadly he passed away in 2008, but my nephew and I still quote some of his classic lines like "I have my reasons" and "He did this..." (and then rolling up the other sleeve to reveal no visable marks whatsoever) "...and this"

"“he said L.A. Karate is better than Seattle Karate”. Who knew this ancient rivalry stirred such forceful feelings?"

I've never seen this one, but I'll make it a priority now. So the fighting is actually sweet? It sounds like it.

Also, from reading the comments, I' going to now have to buy both cuts of the movie so I can have that suggestive ice cream eating scene.

This is my favorite Van Damme film of all time. You can't beat the combination of 80's kickboxing, 80's breakdancing, and 80's Bruceploitation. It's simply one of the Greatest Movies in the History of the Human Race.

Lee: Thanks for the info. The U.S. VHS seems to be uncut but maybe not? As for Kent Lipham: His death was tragic but his legacy will live on as one of the greatest bullies in movie history.

Sir Phobos: Thanks for the kind words. This movie is definitely worth adding to your collection.

Videovacuum: We couldn't agree more with your assessment. Ivan The Russian\Karl Brezdin is at his absolute best! All the best parts of 80s action movies are here and in force.

One of the all-time so-bad-it's-good classics. I've seen both the UK and US cuts and prefer the latter for its soundtrack and even clunkier editing (which somehow adds tremendously). The aforementioned ice cream cone scene is easily one of the most uncomfortable cinematic moments ever, and just wouldn't fly in Reagan 'Merica. Great review guys!

Thanks! Haha, so true about the ice cream scene. It is very creepy but hilarious at the same time.

I even enjoyed the sequel!

The first movie I ever watched with Van Damme in it. Like many of his works, a true guilty pleasure.

Ricky: The sequel was just as good. Max Thayer, Matthias Hues and Cynthia Rothrock at their best.

the bump on his head came from an accident he had as a two year old, he fell into an empty swimming pool.thats the story...he sold it as the leftover from some fight, but the truth is that little accident as a kid.

and btw, i just did a review of kickboxer.

Thanks for the info! Will check out your review!

Thank you Hellford667 for clarifying the bump, which has always bothered me. Can someone (aka TY or Karl Brezdin) explain this Karl Brezdin thing? As a Van Damme fan from the way back, I think I missed something.

The Karl Brezdin story is pretty hilariously silly: In the opening credits, Van Damme is credited as "Ivan The Russian". Then during the end credits, he inexplicably has a new name: Karl Brezdin. Thought it was Ivan?! Haha.

Hmmm ... I wonder if there's somebody out there who knows why. Maybe we could dig one of the production staff up ...

Hmm, that would interesting to finally get the info about the name change!

Good question, MY GUESS would be that Karl Brezdin was the name in the original script but "Ivan the Russian" - the name that appears in the opening credits - was a name that was demanded by Van Damme to make his character sound more memorable and imposing.

I can easily see whoever was creating the end credits forgetting or not realising that the name had changed and keeping it as the original Karl Brezdin.

I have to imagine this was the role that made Van Damme never want to be a baddie in a movie ever again, because it had to hurt his soul to have to pretend that that Osmond wannabe was kicking his ass. I wonder if he even watches this anymore.

Haha, i bet he doesn't watch this. But it was one of his silliest roles to date. In real life the Osmond kid would have been destroyed by Karl Brezdin!

That should be interesting! Definitely looking forward to the sequel.

Great review, guys. Personally, I prefer the second part. It's hard to beat the combination of Avedon, Hues, Rothrock and Yuen. Additionally, I always enjoy seeing movies filmed in beautiful Thailand.
I had always wondered where Van Damme got the bump on his forehead. For more Van Damme villainy, check out Black Eagle.

Thanks! The 2nd one is a classic. Hues and Rothrock at their best. No Retreat 3 and Black Eagle reviews are coming soon.

Forgot where he got that bump...