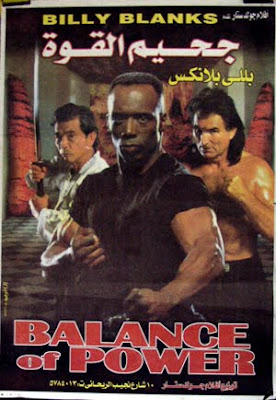 In what must be one of the last punchfighters released direct-to-VHS before the DVD era, Billy Blanks shows up right before his Tae-Bo fame.

Niko (Blanks) is a kindly Karate instructor in the ghettos of Canada. He runs this inner-city dojo with his partner Charlie (Walker Boone). He's a firm but fair taskmaster to his kids. All the funny stereotypes are there, including the fat kid. Niko even takes on a mentor role for the wayward Billy (Adam Bonneau). Billy even sometimes hangs out at the dreaded "playground". Apparently this playground is riddled with drug dealers and thugs.

Meanwhile, Hastishita (Akayama) is the ringleader of...wait for it...UNDERGROUND PUNCHFIGHTING MATCHES TO THE DEATH! The crowd enthusiastically holds their cash in their hands and yells and places their bets. Hastishita is in cahoots with evil Brit Slater (Hough) in the drug dealing game. Hastishita has an ace in the hole: vicious punchfighter Takamura (Lew), a man who you know is evil because he chants his own name.

Unfortunately, the problem with death matches is that, well, the opponents keep dying. So a search goes out for a new brawler. Because Hastishita's goons keep shaking down Niko's dojo for protection money, they know of him, so they recruit him. Niko then goes under the wing of kindly elderly master Matsumoto (Mako) and trains like he's never trained before. Matsumoto convinces him to fight so he can take down the evil Hastishita's empire. Niko then develops a close relationship with Matsumoto and his granddaughter Jasmine (Boynton). When Jasmine is kidnapped, he is forced to fight. Will he succeed? Does any of this sound familiar? 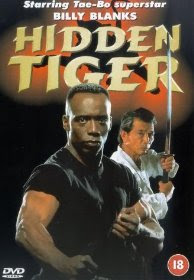 Fans of the punchfighting genre should like this because of the weirder touches, such as the secret cave tended to by mysterious monks, which has TV's hooked up inside it. The acting overall is incredibly stilted and awkward. Usually actors get better as their careers progress. Blanks actually, somehow, has gotten WORSE. He literally has a "blank" stare. But no one really cares about that. If you are a Blanks fan, this is the movie for you, because he shows off his prowess in almost every scene. He has a boxing match with some steam (literally), he can't pronounce the name of his nemesis Hastishita, he has some funny screams, is usually dripping wet, and does a double ear clap to an opponent - with his feet. 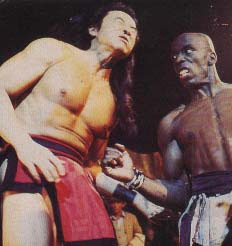 Watch out Sarah Dampf and Lauren Levy, here comes a new verbose, precocious pre-teen girl: Lisa Boynton as Jasmine! Who knew this was a trend in action movies? Mako is great as the wise old master. You end up loving him as much as Niko does. The extended training sequences are a bit different than the ones we usually see, but it could have used a song with lyrics, like "He's a Man" (American Kickboxer 1) or "Fight for Power" (American Kickboxer 2).

There is some pre-Lone Tiger (1999) "poolfighting" and the whole movie is very similar to the classic Shootfighter (1992). Instead of Bolo as Shingo, it has Mako as Matsumoto.

There is some nice Asian philosophy included, and the title refers to the eternal balance of Yin and Yang. There are some quotable lines such as "A sword is tested by fire, a warrior is tested by his actions".

This advice clearly applies to Niko as he goes on his spiritual journey. Go on a journey of your own tonight with this silly classic!

Gotta love Billy Blanks. Back in Action and King of the Kickboxers are such great action flicks, I have been looking for more of him. I have Expect No Mercy to watch soon!

He is great! Can't wait to watch Back In Action! We have that coming up in the pile of movies to watch.

Oh mate, make it your next one! Its the best.

I just watched this and had tons of fun with it. Gotta love James Lew fighting in a diaper!

Haha, that was great! Also the bit when Billy Blanks fights steam was hilarious.