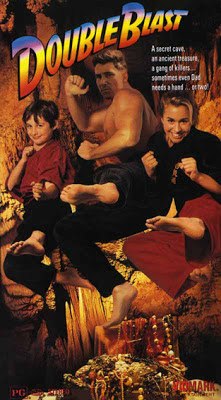 Greg (Cook) is a professional kickboxer who has a son, Jimmy (Berfield), and a daughter, Lisa (Summer), who take after their father and also are proficient in Martial Arts. When a gang of no-goodniks led by Nadir (Estevez) and his number one goon Mongoose (Z’Dar) kidnap archaeologist Claudia (Blair) because she can translate an ancient stone tablet said to lead to the whereabouts of great riches, the kidnapping is witnessed by Lisa and Jimmy. They follow the baddies into the jungle, and are soon followed by their dad. So now everyone, good guys and bad guys alike, are trekking through jungles and caves to try and find the treasure. Who will end up with it?

Ah, to be a kid in the 90’s. You could go to your local video store, rent Double Blast and maybe a Genesis game, then go home and watch Wild and Crazy Kids while eating your Fruit By The Foot. It’s a nice scenario, and surely one that the filmmakers at Davian International (the people behind most of Dale “Apollo” Cook’s movies) were aiming for. Double Blast is nothing if not an attempt to crack the market of younger kids seeking action thrills, and in the attempt making a sort of cross between Home Alone (1990), The Goonies (1985) and Three Ninjas (1992) (one of Berfield’s only credits is a “thank you” on Three Ninjas - was he a young consultant, a stunt-kid, or was he in the running to be one of the Ninjas? We may never know...) Seeing as how the Martial Arts fights aren’t all that different from Cook’s other movies, if such a designation exists, this movie would surely be a hard PG.

Cook carries over his time-honored sweatpants-and-fannypack look into this movie. Why an acknowledged action star of the time insisted on dressing like a tourist in every one of his films remains a mystery. Lorne Berfield, the kid who played Jimmy, was very good and seemed to have a promising career ahead of him. Sadly it never materialized. Linda Blair is along for the silly ride, and Joe Estevez chews scenery as the main baddie. Robert Z’Dar holds up his end of the wackiness on show, and this is the only credited performance of Crystal Summer, who’s not a porn star as far as we know. There are some other names in the cast fans will know, such as Ron Hall, who flips around and fights in a full suit, John Barrett, who’s Cook’s fight trainer, and Ned Hourani, who plays one of the baddies who is constantly getting beat up by children.

Director Tim Spring was certainly on a tear in the mid-90’s, having directed Reason to Die (1990), Double Blast, and Raw Target (1995) all in a row. The golden age of the video store brought out the best in people, and gave us more choices than ever before. What’s good about Double Blast is that it’s at least upbeat, and there’s no annoying kid, which there easily could have been. There are zany “BOING!” sound effects while the children are beating up the grown-ups, and characters read newspapers with grammatical errors in them. Lisa has a boyfriend (Lisa has a boyfriend!) named Charlie (Stephen Brause, in his only role) who looks exactly like TV’s Zack Morris. Maybe that’s why Brause never went on to anything else. The world already had a Zack.

But perhaps the most interesting thing, from today’s standpoint, about Double Blast is how characters call each other “retard” as an insult. You CANNOT do that today. Or maybe you could, but your movie would be rated R, and you’d be accused of bullying and defamation and sued within an inch of your life. It’s all done without malice, it truly was a more innocent time back then, people didn’t know what they were saying. In the end, we watched Double Blast because of the very impressive cast, but the movie is certainly geared for younger viewers. Not unlike Little Ninjas (1990). It’s pretty dumb, but the cast basically keeps it afloat. If you have occasion to watch something of this kind, you could probably do worse than Double Blast.

The 90s were indeed a great time.

I honestly can't think of anything I don't miss from that wonderful decade.

Totally agree, So many great movies, tv shows, and wacky foods like Fruit By The Foot and Dunkeroos.

I fondly remember Fruit By The Foot and Fruit Gushers.

Damn, I love this site. Sorry I don't comment more.

Anyway, this one sounds like a real winner, in that way that everything from the early 90's rules.

I really dug your comment on the use of the word 'retard' as an indicator of the senseless goofiness of the time period. Harmless, but looking back, completely terrible.

Kind of sounds like 90% of what we loved as kids.

Thanks for the nice words!

This is a total blast from the 90s...everything was simpler then...you can call people "retard" with no problem...now you can't say or do anything remotely offensive.