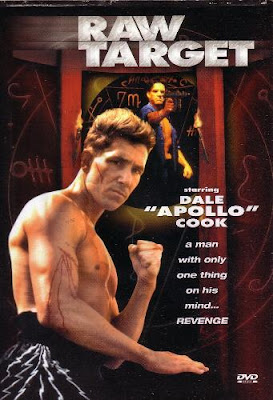 Johnny Rider (Cook) is a kickboxer who accidentally kills his opponent during one of his matches.  His brother Gabe was working with DEA agent Susan Wells (Charters) to take down the evil, sadistic, drug-dealing Rod Sparks (Hill). Unfortunately, Sparks found out Gabe was undercover and killed him. Now Johnny wants revenge, so he follows in his brother’s footsteps and works with Susan to infiltrate the Sparks gang.  Meanwhile, Johnny and Susan develop a romantic relationship, and the main cop working the case, Bill Williams (Hall) complicates matters because he’s involved as well. Can Johnny use his kickboxing skills to get some closure regarding his brother?

It’s a good thing kickboxers and cops have brothers, or most low-budget action movies would not get made. Luckily, Johnny Rider does, so he comes into town to get justice. It seems the filmmakers at least tried to make Dale “Apollo” Cook likable this time around. For Rider, shirtlessness is a way of life, and he always seems to run into trouble and having to kickbox his way out of it.

Because the film is under-lit and most scenes are extremely dark - this is probably the darkest film we’ve seen, darker than American Dragons (1998), Raw Target seems to have pioneered a new genre: Darkfighting. This variant of punchfighting happens when few, if any, lights are on. Perhaps this was a conscious choice by director Tim Spring, thinking that an audience would be hard-pressed to tell if punches and kicks are connecting if you just can’t see anything. But the problem is, well...you just can’t see anything!

Luckily you can see Nick Hill’s wardrobe in the film. Rod Sparks is one snappy dresser. Hill is better acting-wise in Death Match (1994)  (and Fists of Iron, 1995 for that matter), but his martial arts looks good. He tries to play an over-the-top crazy villain, but it doesn’t really come off, he seems more suited to playing the “nice guy”. But though Raw Target falls prey to such common problems for movies of this type such as some horrendous acting and some really terrible editing, once again these things don’t matter. I would assume most people that rented this from their local video store back in the day weren’t concerned with the copious padding of the running time and serious pacing issues. What fans want to see is Cook beat people up, and that definitely happens. Watch out for Nick Nicholson in a small role as well. 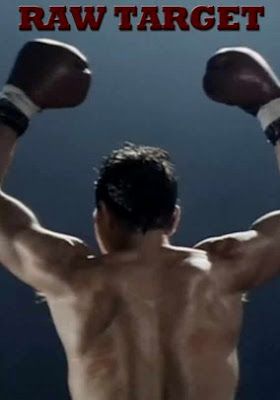 After all the mindless fighting that has gone on, during the final confrontation, the same guitar riff plays over and over again in the background. Could they only afford one riff? But the movie redeems itself from that with a freeze-frame ending and an amazingly groan-inducing, dated final line. And the title song by Gracy Carlson is perfect for the movie, falling perfectly in with other songs such as “No Exit” (from Fatal Combat, 1997) and "White Fury” (from the AIP film of the same name).

Released on Vidmark on VHS in the U.S., as was most of Cook’s material, you could certainly do worse than Raw Target.

Solid review as always. This is on my punchlist though I'm not sure when I'll get to it. I rarely tire of the vengeful brother plot device, but it sounds like some heinous production issues really held this back.

I'd also slot L.A. Streetfighters (Ninja Turf) to your Darkfighters subcategory. That was a really tough watch (literally).

Thanks! We are also big fans of the avenge your brother plot. If only the production was better.


L.A. Streetfighters was a tough sit but it did have some really silly moments. (Like the gang that chants: "Spike them, Kill Them" a thousand times.)

Thanks for the warning on the darkness factor. I'll make sure if I get to this one I watch it at night to lower the chance of glare on my TV screen.

Your Welcome. Looking forward to your take on it. Also we have another Dale "Apollo" Cook movie coming up this week!

Doesn't sound too bad and yes the comparison to No Exit is evident. Might check it out!

Literally, no later than a week after I got a disc of Raw Target off Amazon did Netflix add this to InstantWatch. I've been had again!

They also added a few Mimi Lesseos flicks which I hope will make up for it.

I hate when that happens! Also interested in your opinion of Raw Target!

Which Mimi Lesseos flicks have you've seen? We watched "Streets Of Rage" a little while ago.