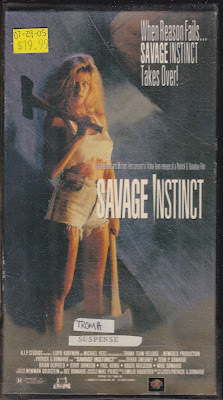 AKA: They Call Me Macho Woman

Susan Morris (Sweaney) is a mild-mannered woman whose husband was recently killed in a car accident. Seeking to fulfill their dream of having a nice house out in the country, she attempts to move to rural Loma County, California. But while driving out to the property, Susan and real estate agent Cecil (Ringuette) run afoul of a sinister gang of drug dealers. Led by the hulking brute Mongo (Brian Oldfield in what is criminally his only screen role to date), the gang of baddies seek to make one last big score before disbanding their criminal enterprise. But since Susan has stumbled upon it, they must kill her. So they chase her all over the woods, but Susan decides she’s had enough of her Mongo-based ordeal and decides to fight back. It’s now time for revenge, Susan Morris style! What follows you must see!

Ridiculous. Silly. Funny. Enjoyable. There are some words for you. But all these words - and so many more I’m leaving out - perfectly describe the wonderful Savage Instinct. You will have a smile on your face for most of this movie’s running time (provided you have an inkling of a sense of humor - some people out there don’t, it seems). Everything from the clothing choices of the goons, to the acting, to the effects, to the plot points and pretty much everything else is totally winning, and the icing on the cake are some priceless bits of dialogue, none of which we’ll spoil for you here. This movie is just a great take on the revenge movie, showing it can be done in a less-than-serious fashion. Take Mongo and his illegal barn of drugs. He looks like a cross between Richard Moll and Jesse Ventura. And when he really gets mad, he has some special headgear that will inspire some major fear. 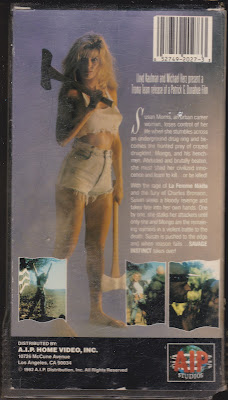 Troma released this movie as They Call Me Macho Woman, and then AIP re-released it as Savage Instinct. Judging by the box art and typeface font, they certainly weren’t trying to capitalize on Basic Instinct (1992). No sirree. But we'll take this movie any day of the week. Debra Sweaney deserves the fame Sharon Stone has. Life’s not fair I tell ya. (It should be noted that the woman on the box is not Sweaney, but a cover model that has nothing whatsoever to do with the movie). But Savage Instinct is just further proof that writer/producer/director Patrick Donahue is an underrated genius. His first movie, Kill Squad (1982) is a Comeuppance Reviews favorite and is totally great. Savage Instinct is his second movie - although there was a nine year gap in between them. These two titles as your first two movies is impressive, but it seems his output after that is hard to get ahold of. We just want to tell the world we’re fans of his work, at least his first two films. His son Sean has been involved in his father’s work from the beginning, as well as many other productions (including Omega Cop, 1990) - but here, as Terk, the guy with the open-necked ballerina-like shirt and the classic Rachel Bolan-style earring-connected-to-nose-ring-by-a-chain, he really shines.

Savage Instinct represents the goofier end of the action/revenge movie. We recommend it.

Also check out a review by our buddy, The Unknown Movies!

Very funny film, best part is when Chang warns Susan that he has heard 15 years of martial arts training, and Susan responds by shoving a spike in his foot and saying "ballet, six months!"

Watched the trailer. "With the fury of Charles Bronson and the rage of La Femme Nikita she is pushed"...

SOLD! Already found a source to watch it.

Snake: You will definitely enjoy this one. Kill Squad is great too.

This one sounds great. I'm going to keep an eye out for this one.

Thanks for the review.

You're welcome! It is a lot of fun. Hope you get to see it soon.