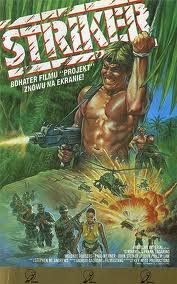 When journalist Frank Morris (JPL) is jailed by the Sandinistas in Nicaragua, the one and only John “Striker” Slade (Zags) is sent in to rescue him because he’s the “best in extraction from hostile territories”. While in country posing as a Canadian photographer, he teams up with a local woman, Marta (Rodgers), who acts as his guide and confidante. Soon enough, the Strikester proceeds to decimate the population of Managua. But the true baddie behind it all is Kariasin (Steiner). His name even sounds evil (i.e. “carry a sin”.) With the odds stacked against him, will Striker be able to complete the mission and make it out alive? Find out today!

Striker is very fun, classically 80’s action and one of the better Rambo knockoffs we’ve seen to date. Marrying that with another popular DTV genre of the day, the El Presidente movie (don’t forget Nicaragua was a hot subject at the time and in the news a lot), and tied together in that wonderfully Italian way by co-writer Umberto Lenzi and the great director Enzo Castellari, there’s plenty to enjoy here. 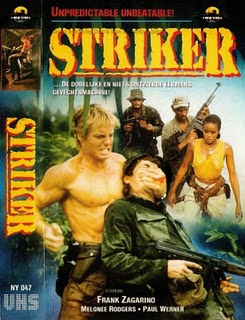 One Frank Anthony Zagarino, or Frankie Zags as we like to call him, has one of the better (?) super-wooden monotones committed to film. His speaking voice is the equivalent to a hospital life-support flatline. He makes Don “The Dragon” Wilson sound like Crazy Eddie. His elocution aside, he has some radically awesome sunglasses that say to the world “the ultimate badass has arrived”. Plus he has a wide variety of ways to kill his enemies. Some movies contain just constant shooting and that can get boring after awhile. The makers of Striker had the good sense to realize that variety is the murderous spice of life. Famously, he even has a killer slingshot, making him look like Dennis the Menace in a fit of ‘Roid Rage.

Striker is, for all intents and purposes, what we normally call a Jungle Slog, but thankfully there’s really not much slog. There’s too much highly implausible and funny action on display. The movie basically succeeds in spite of the performance of Zags. For as little energy and screen presence as he brings to his dialogue scenes, that is counterbalanced by John Phillip Law (or JPL as we call him) - he really is at his absolute best in this movie. Plus Striker has one of the better exploding helicopters we’ve seen in a while, and naturally it has the prerequisite torture scene.

Not to be confused with any of the many other action heroes named Striker in the 80’s, this one has enough entertainment value to raise it above the level of many of its contemporaries. Chalk up another winner to AIP. Plus Jeff Moldovan is credited as a “Special Action Supervisor”, and Daniel Greene is on board in an uncredited role as a trucker. So you really can’t lose.

Comeuppance Review by: Ty and Brett
Posted by Ty at 1.4.13

It may be called Striker 2 because of the other Frank Zagarino movie where he plays the character of Striker - Project Eliminator. We have reviewed this movie as well (It's actually one of our favorite reviews. We think it's funny, anyway...) That may answer the question. Also it reminds us of how the movie Zombie is called Zombie 2 in Europe because of Dawn of the Dead.

This one is gold. Got the lovely Japanese VHS myself. Gotta love Zags!

Agreed! That is really cool you have the Japanese tape. Zagarino Rocks!

Sounds great! BTW, did you ever see the Zagarino film Hammerhead?

This was a lot of fun! We have seen Hammerhead and that was a blast to watch too. Review coming soon.

Solid Rambo ripoff. Castellari's 80s movies were always great. Any name, no matter how silly, sounds better with Striker added to it.

Haha! Love the nickname. We can't agree more. Striker is the perfect name for any hero.

When I was a youngster I always remembered the cover with Striker's angered face as he prepared to unsleash his slingshot of doom. Suffice to say when I was old enough to comprehend the rudeness I couldn't get enough of this great film.

Great story! Thanks for sharing it...Zagarino's slingshot stole the movie.

This has been on my radar, so I'm glad you enjoyed it, because it probably means I will as well. And ditto on loving the fact that Explosive Action has the Japanese VHS.

You will definitely love this movie! Zags at his best.