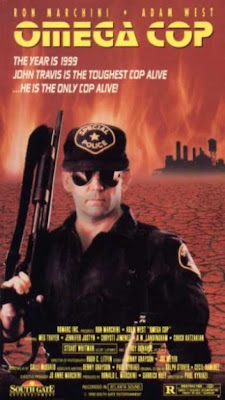 Starting with some very funny Adam West narration about global warming (written by West himself), we are first introduced to the crazy world of John Travis (Marchini), whose saga even extends to another movie, Karate Cop (1991). 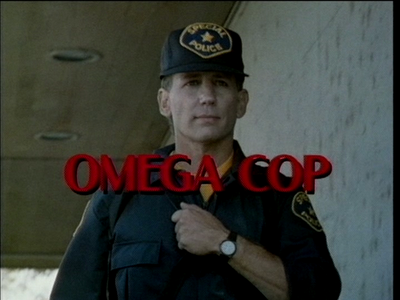 Travis is part of a team of aptly-named "Special Police" run by Prescott (West). They patrol the post-apocalyptic wasteland while listening to incredibly catchy Beach Boys-type songs, and fight the scavs, who are homeless baddies. When called to break up an auction of slave women (Marchini must have a fetish for bondage as he himself is tied up in both this film and Forgotten Warrior), his team, including a guy who resembles a bulked-up Dave Coulier, are shot and killed. Thus leaving Travis as...wait for it...THE ONLY COP ALIVE!

Travis's trademark weapon is a bunch of pipes barely held together by electrical tape, meant to be some sort of multi-barreled shotgun. He is put in charge of the safety of two women, causing him to say in his trademarked deadpan monotone: "I feel like Mother Goose." Their hideout is a baseball dugout, which is apparently immune from radiation of any kind. Travis's goal is to defeat the dastardly Wraith (Chuck Katzakian, the head crime boss in Death Machines) and try to bring the girls to Montana where there is apparently fresh air and water. Will Travis succeed or die trying? 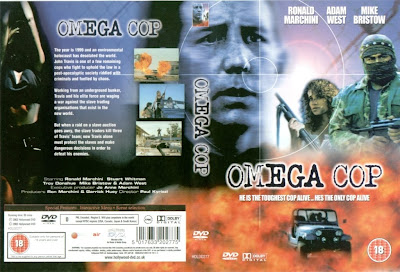 If you printed the word "silly" onto a piece of film, it wouldn't be nearly as silly as Omega Cop. The scavs have funny, nonsensical makeup and Wraith looks 75 years old, and is draped in leather. A major plot point in the movie is Travis's hat. He spies a punk scav wearing his "Special Police" cap and says: "That-guy-has-my-hat". (Remember the monotone.) For some reason Troy Donahue and Stuart Whitman are on hand to class up the movie, but in actuality, are further muddying their careers. One feels especially bad for Whitman, in his role as a doctor. He is forced to wear ridiculous makeup and spout inane dialogue about the environment.

Like Mickey Rooney in Maximum Force (1992) and Joe Estevez in Money To Burn (1996), Adam West never leaves his one room set. He never talks to Marchini face-to-face.

West's one-roomer is welcome but the movie could've used more West antics. He says he can't leave the room because of "Solar Flares". Very convenient. His bolo tie and mullet are not enough.

Omega Cop is a supremely wacky, fun, bizarre, Marchini triumph for the ages!

Am looking forward to digging through your archives. Your taste in films is right up my street. Loving the Dolph reviews!!

Thanks, buddy! Will be doing the same for your archives!