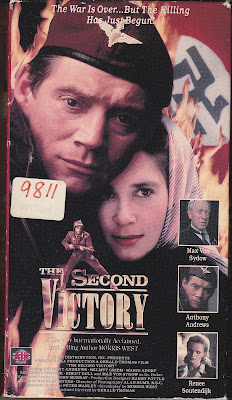 For today’s plot synopsis, we’re going to quote the back of the AIP VHS box. It reads (in part): “Just after the end of WWII in the winter of 1945, the fighting has ended, but the brutality of murder and the pain continue. Army Major Mark Hanlon (Andrews) has been appointed Occupation Officer and, although he retains an idealistic vision of harmony, he finds that his vision turns to bitter revenge when his good friend is senselessly murdered. Hanlon must discover the hidden mystery behind the death and finds that sometimes the Second Victory is more difficult to achieve than the first.”

The Second Victory is a dour and dry drama, with virtually no action, but a whole lot of talking. This AIP pick-up was seemingly added to their catalog to try to appeal to older viewers, or more mainstream viewers. Perhaps feeling cornered into the “shirtless meathead with a machine gun” market, the higher-ups at AIP decided to diversify. But diversify on a budget. So they settled with this tepid, play-like drama, perfect for undiscerning senior citizens for Sunday afternoon viewing. Presumably Grandma and Grandpa weren’t watching Maximum Breakout (1991) or Killzone (1985), so AIP decided to tap into the sweet, sweet “old person” market. 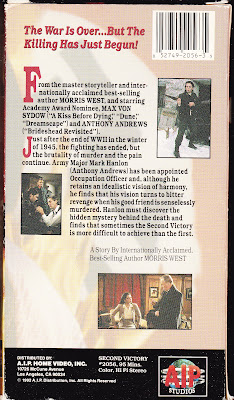 There’s nothing wrong with AIP attempting a bid for “respectability”, but it seems they didn’t stick with it and were soon going back to what they knew with fare like Triple Impact (1992) and Elves (1989). We say it’s better that way. Go with what you know. As far as The Second Victory, or T2V as all the kids are calling it, it has some nice Austrian locations, and Max Von Sydow improves things when he’s on screen (which is far too little - he’s under-used here), but the problem is, this movie has a slow pace and is a standard, boring, no-frills drama that desperately needs some pep. A few skiing scenes aren’t going to solve their problems.

So it’s more serious, adult fare than what AIP fans are used to, which is fine, but this movie is just so “square”. Seeing as most of the AIP catalog is weird, wild and wacky, this one just stands out like a sore thumb. It’s hard to imagine even WWII buffs getting into this one.

So it’s a weird sidestep (not necessarily a misstep) for AIP - not representative of their catalog at large. Not that it was bad, but we just can’t really find any outstanding reason to recommend this one.

I got tired just reading the plot synopsis, definitely avoiding this one.

Good idea! This was pretty boring for most of the running time.