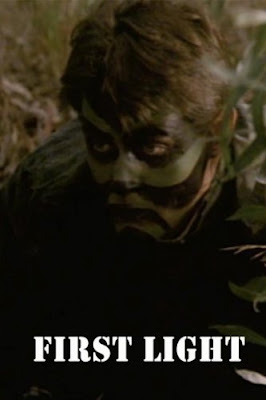 Sam Browning (Pare) is a soldier that trains with the Psychic Warfare Operations Unit. In other words, he’s developing his psychic abilities that he may already have for the field of battle. When the wife of the Director of the C.I.A. has a dream in which her daughter, Kathryn (Lee) is being chased by terrorists, she tells her husband to do something about it. Working from this dream/tip, Alan Baker (Widerker of American Cyborg: Steel Warrior, 1993 and The Order, 2001 fame) contacts Sam Browning and tells him to go to Turkey, where Kathryn is doing volunteer work.

Wary at first, Browning agrees and ends up shadowing Kathryn. Since the terrorists keep attempting to kidnap her, the unlikely pair have to go through many travails to try to avoid them or kill them, while attempting to leave the country alive. Will Browning’s psychic powers play a central role in all of this?

If you liked the Michael Pare-based stupidity (and we mean that lovingly) of Deadly Heroes (1993) and Killing Streets (1991), here’s another one for you. Blink of an Eye is still much better than Warriors (1994), however. But then again, so are most movies. It features Pare in a generic Middle Eastern country setting, shooting terrorists. On a more positive note, because Sam Browning does go into some sort of psychic trance, the role is perfect for Pare because he can be as wooden as he wants to be. There are definitely some moments where he’s very tree-like. 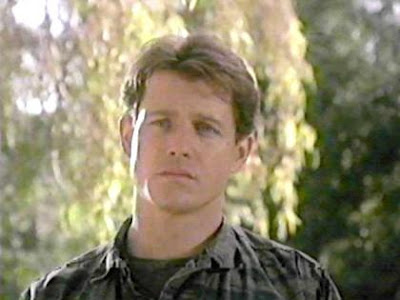 The movie is oddly directed and has a strange rhythm. Even though it was his first film, this shouldn’t be surprising as it was directed by Bob Misiorowski, the man behind the horrendous Derailed (2002). Sadly, we felt not enough was done with the “Psychic Soldier” concept. It’s a good idea that went largely to waste. Just Michael Pare putting his fingers on his face wasn’t enough to carry the idea.

Plus there was no strong, central villain for him to fight. This is an easily avoidable problem, but still some action movies manage to screw this up. Another common pitfall this movie falls into was the fact that it slows way down before the climax. Unfortunately, points must be detracted for the lack of creativity for Pare’s character and absence of a major antagonist. Blink Of An Eye could have been more than a machine gun shoot-em-up/Prerequisite Torture/guard tower fall/blow-up movie, but it doesn’t rise above that.

If that’s your thing, fine, but this movie seems to be TRYING to rise above it. But we do always love seeing Michael Pare, and we also enjoy movies shot in Israel, so those were pluses. And, after all, some action goods are delivered. Of course, there’s also the “Yay!" Kid, one of our favorite characters in the movie. If you’ve seen it, you may remember him. If not, watch out for him.

Blink Of An Eye makes too many missteps to warrant an enthusiastic recommendation, but it’s relatively decent “Sunday Afternoon” viewing.

In Germany the VHS is called "First Light". I like Pare, but in the last years he had a contract of annuity with Uwe Boll.

Pare definitely needs to find some better roles. It's not too late.

I actually thought Pare did a good job in this film and I didn't really see him as wooden.

Michael Pare has his own personal spectrum of wooden!