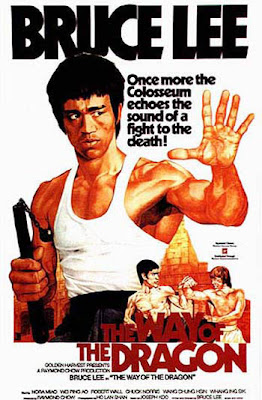 AKA: Return Of The Dragon

Tang Lung (Bruce) is a Chinese native and something of a wide-eyed innocent when he comes to the big European city of Rome to help his relatives, who run a restaurant in the Eternal City. But a big problem arises when gangsters declare that they want the restaurant and the property it’s on for themselves.

Initially Lung’s family are helpless and confused about what to do next, then they find out that Lung is a Kung Fu master. Lung staves off the gangsters by fighting wave after wave of thugs and baddies sent by the higher-ups in the nefarious syndicate. For a while, the restaurant seems secure. But then the bad guys bring out the big guns by calling in Colt (Chuck), an American Martial Arts master who flies to Rome with the sole reason of defeating Lung in a fight. The climax of the movie sees the two titans have it out in the legendary Colosseum. Who will emerge victorious?

The Way of the Dragon (or Return of the Dragon, as it was marketed after the success of Enter the Dragon), was a Golden Harvest production written and directed by Bruce Lee, and he also co-produced, starred in, and of course was credited as Action Director and Martial Arts Instructor on the film. Bruce’s talent was immense and seemed to be growing at this point in his career; unfortunately for the world, he passed away the next year after the release of this film.

Of course, this led to many producers trying to fill the void left by the legend and his huge popularity, leading to such names as Bruce Li, Bruce Le, Dragon Lee, and our personal favorite, Bruce Rhee. Just to name a few. But for our purposes here at Comeuppance, it was nice to actually see a BRUCE LEE film, as opposed to some of the movies that appeared in his wake. It puts things into perspective when you can go back and see the originator, instead of one of the imitators. 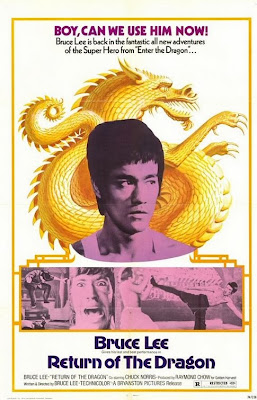 Don’t get us wrong, many of the movies featuring the “imitators” are fun in their own right and certainly have their charms, but there’s nothing like an actual Bruce Lee film, and, sadly, there aren’t that many of them to choose from. Here, though, starting from the cool, Spaghetti Western-style animated opening titles sequence, we go into a very 70’s world: big cars, big collars, pea soup-colored home decor, and of course Bruce Lee was still alive.

Maybe someday we’ll be able to go back to the 70’s. Of course, it was also a time when a young Chuck Norris, sans facial hair (but with plenty of hair everywhere else, as Bruce humorously points out during their fight scene), was just coming on the movie scene. Chuck doesn’t appear until about an hour into the movie, as he’s the baddies’ “secret weapon” brought in to bring Bruce down, but, like Slaughter in San Francisco (1974), Chuck plays a villain with limited screen time. He had yet to establish himself as a hero, and of course when he comes up against Bruce Lee, the fur’s gonna fly! 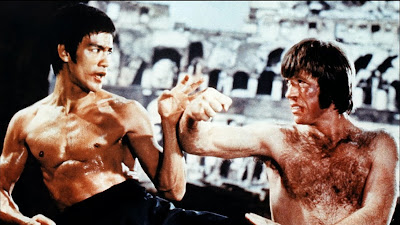 The movie does get off to something of a slow start, and the pacing is kind of odd, especially by today’s standards, but really there’s no shortage of Bruce action. It was a time when terms like “Kung Fu” and “Nunchucks” were brand new in the American (and the non-Asian world’s?) lexicon, so that was interesting to see. The dubbing is...unfortunate, but typical for productions of this time and place.

That’s how it is on the Inter-Vid VHS, and it’s unlikely to be any better on many of this movie’s other releases. A widescreen, subtitled, remastered DVD would be awesome, but it’s probably an impossibility, because of the way the movie was shot. The only other real complaint we have is that it’s kind of repetitive, plot-wise, but that’s a minor quibble, we’re just grateful this film exists in the first place. It would be fascinating to think what Bruce would be doing if he was around today.

There’s a really good chance he’d be making DTV movies with the action stars of our day like Scott Adkins and Gary Daniels, among others. Or perhaps he’d be making movies in Hong Kong with Jet Li and Donnie Yen. Or maybe both, there’s no way of knowing. But Return of the Dragon remains an important part of the Bruce legacy.

Email ThisBlogThis!Share to TwitterShare to FacebookShare to Pinterest
Labels: 1972, Bruce Lee, Chuck Norris, The Way Of The Dragon, VHS

The fight in the Colosseum is truly classic. Another question is whether there even would be any Western martial arts movies without Bruce Lee?