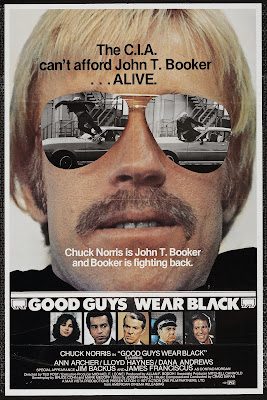 
John T. Booker (Chuck) is a former Vietnam commando who has blown up his fair share of huts and guard towers when in his prime. Five years after the end of the war, he’s living a peaceful life as a teacher and race car enthusiast in Riverside, California. There’s even a romance brewing with journalist Margaret (Archer), and all seems well. That is, until members of his former unit start being assassinated one by one. This sends John T. Booker on a quest to find out the truth behind the ruthless murders. He just may find that it’s a conspiracy that goes - you guessed it - all the way to the top. Will good guys wear black, or will good guys be DEAD? Find out today…

Good Guys Wear Black is a pretty early Chuck movie, and has an old-fashioned, staid vibe to it more suited to the TV movies of the day. We found it boring, talky, and it looks its age, and not in a good way. There isn’t even any Martial Arts until an HOUR into the movie. All that being said, there is a standout action setpiece around that point.

Chuck is a guy you can’t help but like, and, despite the annoyingly minimal character development (what else is new in the world of Chuck), his mustache is looking especially walrus-y this time around. Plus the opening credits sequence sets things up to be a lot cooler than what follows, with snazzy 70’s-era computer graphics and nice music. But then it goes into a ‘Nam sequence the viewer has trouble seeing, and interest starts to slip. From there it goes to some government yakety-yak, and interest slips even more. If not for Chuck’s superstache, this first half would have been a total waste. 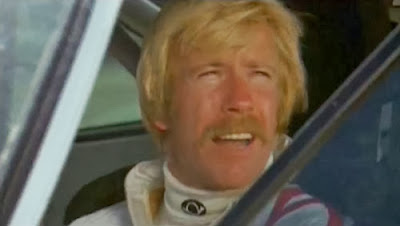 Interestingly, though, Seagal ripped off Chuck once again - Chuck was first when playing the silent-but-intellectual professor, decades before “Professor Robert Burns”. Another thing going against the movie is the unusually fuzzy presentation from Vestron. This seems to be a rare lapse for the normally fine company. The visuals are dull and washed out. Maybe other presentations on other formats are better, we’re not sure. If you have another version, write in to let us know. But it all kind of cumulatively adds up against the viewer’s enjoyment. It made us aloof to most of the proceedings, and the slow, overlong nature of it all certainly didn’t help either.

We really wanted to like the movie more, and all it had to do was have Chuck fight more people, and have more scenes like the big action setpiece in the middle. That’s ALL it had to do to win us over. But no, there was too much mush clogging things up. So it’s all very middle-of-the-road, as way too many Chuck movies are, as things didn’t start to pick up for him until later in his career.

Good stuff, This one is a pretty run of the mill flick, Chuck didn't start bringing the goodness until An Eye for An Eye.

Thanks! Totally agree, this was a weak Chuck flick. Code Of Silence or Hero and The Terror are better options.

Your review is very accurate. I watched this movie in the restaurant of a Polish cruise ship in the middle of the Baltic Sea. Since this was during Communist times and on a ship, I guess it was a real Pirate copy. I own the Scandinavian dvd, which has a good widescreen picture. Nothing can overcome the way the movie was shot, however. Very TV movie-ish, as you mentioned. Ted Post was a TV director, after all. I noticed on Imdb that Ted died two months ago, so that makes your review Post-humous. Here's to you, Ted. Your movies stayed firmly in the middle of the road.

Thanks! Wow! what a memory of watching this. That's pretty cool you saw this on a cruise ship. That's unfortunate that Ted died...totally agree with your toast to him.

It's a shame that the cool title Good Guys Wear Black is wasted on this film.