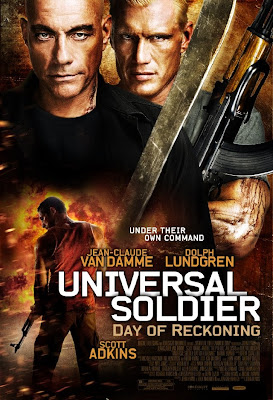 
John (Adkins) has suffered a horrendous family tragedy, and former UniSol Luc Devereaux (Van Damme) is now the target of his quest for revenge. Not helping the already volatile and complex situation is an out-of-control maniac on the rampage named Magnus (Orlovski, who was so unforgettable as “The Freak” in the previous installment of this series) who is tracking John’s every move. Meanwhile, our old buddy Andrew Scott (Lundgren) has assembled an army of disaffected former UniSols and is acting as their leader.

Their aim is to form a militia-style separatist group in an attempt to be free from their former masters, the government. (this was a genius plot development as a potential direction to take the series, in our opinion). But that’s just the beginning: as John travels through the treacherous world in his quest for answers, he won’t just have to fight for his life, he’ll have to question the very nature of reality itself. Now that’s a concept for an action movie. Will Luc or Andrew finally face their DAY OF RECKONING? Or will it be John? Find out today! 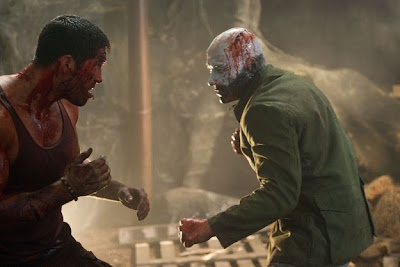 There are many praiseworthy things about Universal Soldier: Day of Reckoning. Probably the most obvious is that it is an action movie with a difference. Its weird and somewhat nonlinear structure sets it miles apart from the more pedestrian beat-em-ups all too prevalent in the market today. The unorthodox style is highly effective - truly ANYTHING can happen and the viewer is excited and thrilled to see what’s coming next. This “dare to be different” approach scored big with us, which brings us to another reason why we praise this movie: it appears to be “by fans for fans”, or BFFF as our new clothing line will be called. In other words, it would seem the film is tailor made for hardcore action movie fans, who have seen thousands of them in their lifetime, and crave something different that will throw them for a loop. It seems unlikely that a non-action movie fan would like or even understand this movie. 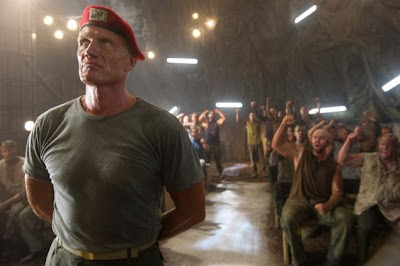 Truly John Hyams is keeping the current state of action afloat, single-handedly. US: DOR is beautifully shot and directed, and he’s clearly not afraid to take chances. Just about all of his gambits worked, as the movie fires on all cylinders and is, frankly, riveting. And while a lot can be made about the film’s violence, or ultraviolence, which is a more appropriate term, violence for its own sake means nothing and is very boring without solid ideas behind them.

Thankfully, US: DOR has the brains and the brawn to make a satisfying spectacle. While Hyams’ Universal Soldier: Regeneration (2009) is a truly excellent piece of work and to date Hyams’ masterpiece, Day of Reckoning, we felt, was superior to his Dragon Eyes (2012). But at least he’s keeping Van Damme employed...seemingly also single-handedly.

Van Damme appears to be on a winning streak of late, and his career, we say tentatively, is back on form. JCVD has a small, but pivotal role here, not unlike his turn in the aforementioned Dragon Eyes. Personal hero Dolph Lundgren is typically great, but the movie is all about Scott Adkins, in one of his best roles to date. Add to that some awesome fights and a standout car chase, all done, daringly, without music, and you have another potent piece of work from Mr. Hyams. If you happen to be reading this, Mr. Hyams, we just want to say to you: more please!

Make sure you get the movie on iTunes, as this is the unrated director’s cut not found elsewhere. Universal Soldier: Day of Reckoning is like manna from heaven for true action fans, and we recommend it highly.

Also check out write-ups from our buddies, Cool Target and DTVC!
Posted by Ty at 25.10.13

US: DOR is such a great film. John Hyams should really be directing big budget movies but I'm quite pleased he's sticking with DTV films.

The action in this film is incredibly well choreographed and the story is genuinely intriguing and stylishly directed (particularly amazing considering this is the sixth Universal Soldier film - if you count the TV movies).

My only problem was that I think Hyams could/should have handled the shift from the Unisols being reanimated zombie soldiers to them just being superhuman clones a bit smoother.

Totally agree with your comment. The action scenes were excellent...all action movies should learn a lesson from Hyams...no shaky cam or quick cuts.

I hope he sticks with DTV, he knows his audience and he will deliver.

Had no idea there was a director's cut of this film, anyone have any idea what the differences between both versions are?

Most of the differences are for some of the violence...especially the fight in the sporting good store.